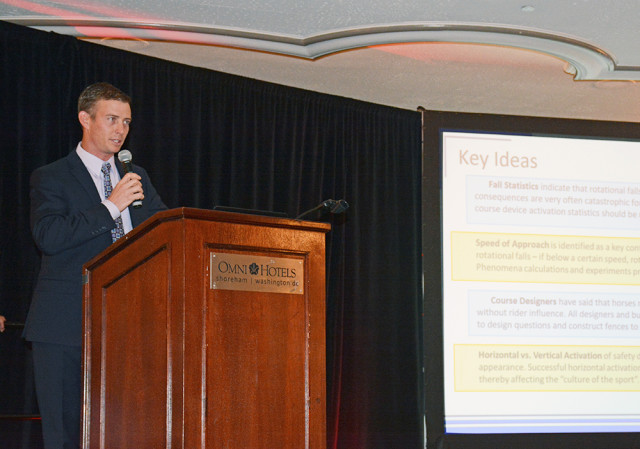 It’s been another busy day at the USEA Annual Meeting & Convention in Washington, D.C., during which we celebrated this year’s top horses and riders and special award recipients and in the Year-End Awards Luncheon (click here for a photo gallery). U.S. Coach David O’Connor also outlined his proposed 2016 plan for the Land Rover U.S. Eventing Team. Read on for more of what happened today.

New Modified division one step closer to being approved

The Eventing Technical Committee approved the new Modified division in its meeting this afternoon. This new level is designed to provide a stepping stone from Training to Preliminary level. The Modified division still needs to move forward to the USEF for approval before being officially implemented.

The USEA and USEF have sent a proposal to the FEI to replace the CH-Y2* at the North American Junior & Young Rider Championships with a CICO2* team competition. This is the first time a CICO would be held at the two-star level and details are still being worked out, but the FEI has recognized that North America’s geographical position provides unique difficulties for international team competitions.

The CICO format would allow the team competition to be held among areas regardless of the participation of another country. In addition, this team competition would set the framework for allowing teams from non-North American countries to participate in the future. The age limit of 21 would still be enforced, but riders would only need to obtain an MER at the CIC2* level to qualify. The Junior Championship would run concurrently and continue as a CH-J* Championship.

A significant percentage of U.S. FEI officials are set to age out in the next five years, leaving only one 3/4* technical delegate and five 3/4* judges. Organizers have been asked to make an effort to hire a less experienced official to work beside a more experienced official in an attempt to grow the number of international judges from the U.S. Another hurdle for potential officials is the prohibitive cost of education and testing, which can add up quickly.

The PRO Annual Meeting opened with a word from PRO President Allison Springer, followed by a presentation on fitness training in eventers from Dr. Joe Pagan at Kentucky Equine Research showing how KER ClockIt Sport can be used to assess your horse’s fitness.

Caroline Martin and Karri Bellamy reported on the Prelim to PRO program they spearheaded in March. PRO’s junior membership has increased from 27 to 45 in the last year.

Max Corcoran and Sam Burton Henley discussed the Equine Management Training Program and encouraged PRO members to get involved by promoting this training program for professional grooms and barn managers by offering on-site internships and housing for participants.

PRO Executive Board member Mark Hart brought up the accident and disability insurance offered to PRO members through Zurich Insurance. Mark encouraged PRO members to take advantage of the insurance benefits, which can be hugely helpful to riders who suffer an injury.

Will Faudree, who is recovering from a neck injury sustained in a fall earlier this year, shared his personal experience and said the insurance he received through PRO was critical to him being able to cover the staggering costs of his surgery and subsequent recovery. For 2016, Executive Director Samantha Lendl has worked with Zurich to allow for the annual premium to be paid in two installments.

The USEA has 137 collegiate members, who receive a $25 discount on their USEA membership, and there are 31 colleges and university affiliate memberships from around the country, with six of ten areas represented and more schools being added all the time.

The collegiate program now has leaderboards for every division. The leaderboards were started halfway through the year, and Rob says they are still working out the kinks, but he expects that next year the program will recognize individuals and teams during the year-end awards at the USEA Convention.

Robin Walker led a discussion on free jumping, which was added to the Future Event Horse Championships for 3-year-olds on the East Coast this year. With this being the first year of using free jumping in the championships, it became apparent that some handlers were not familiar enough with handling young horses in a show environment.

Robin explained what is expected by the judges in the free jumping portion and how handlers should prepare their horses for success. He made it very clear that getting a horse ready for the chute would be different from horse to horse, with the best results coming from those that start early and take it slow. He also noted that 2015 saw a greater number of horses participating in the FEH program .

Many thanks to EN superstars Leslie Threlkeld, Maggie Deatrick and Dave Taylor for contributing to this report. Don’t forget to catch up on photos over on EN’s Instagram, and click here to read all of our #USEAConvention coverage so far. Stay tuned for much more.