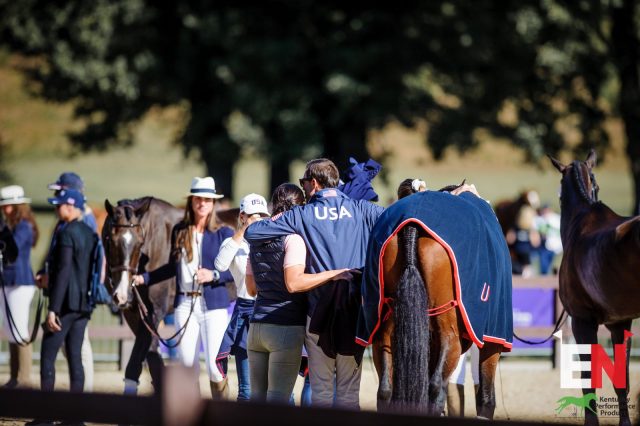 Off The Record’s crew. Photo by Tilly Berendt.

The USEF Horse of the year and Equestrian of the Year Awards are put to a popular vote each year to determine the winning athletes, pulling from a pool of finalists from multiple disciplines. Eventing doesn’t always make the cut in these awards, but this year FEI World Championships team member Will Coleman represents the insanity in the middle along with the Off the Record Syndicate’s Off the Record.

[View all nominees and vote]

Voting is open now through 11:59 p.m. ET on Dec. 29. Click here to vote now. Please note that you must be logged in to your USEF account to vote. After submitting your selections, you will receive an email asking you to confirm your vote. You must confirm your ballot in order for your votes to count!

Let’s take a look at the full field of nominees for International Equestrian of the Year: 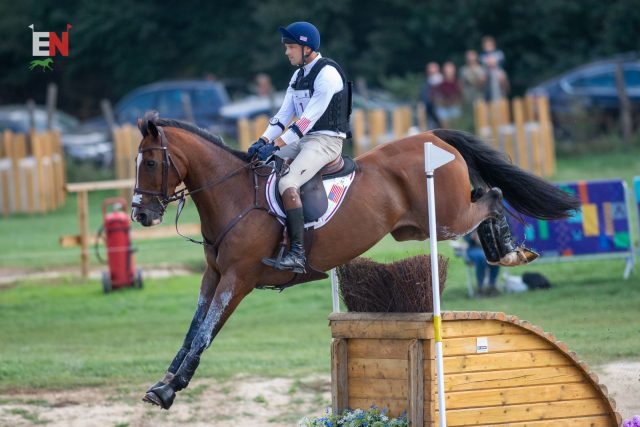 2022 World Championship silver medalist Will Coleman is a notable athlete and competitor for U.S. eventing. His decorated 2022 hit its pinnacle with helping the U.S. Eventing Team qualify for the Paris 2024 Olympics with an incredible effort at the World Championships in Pratoni del Vivaro, Italy, highlighted by a clutch clear show jumping round with medals on the line, but they don’t end there. Coleman’s consistency placed him within the top 10 as an individual in every CCI5*-L competition he entered this year, finishing seventh at the Land Rover Kentucky Three-Day Event presented by MARS Equestrian™ with Dondante, seventh at the FEI World Eventing Championship in Pratoni del Vivaro with Off The Record, and sixth at the Maryland 5 Star at Fair Hill with Dondante.

Coleman, who owns and operates Okonokos Farm in Ocala, Fla., a conditioning and training site utilized by U.S. Eventing, is living a “lifelong dream” that began when he was six years old in Charlottesville, Va., on a Shetland pony and continues today.

Kate Shoemaker, a member of the U.S. Para Dressage Team that won bronze at the Tokyo 2020 Paralympics, enjoyed another banner year in 2022. 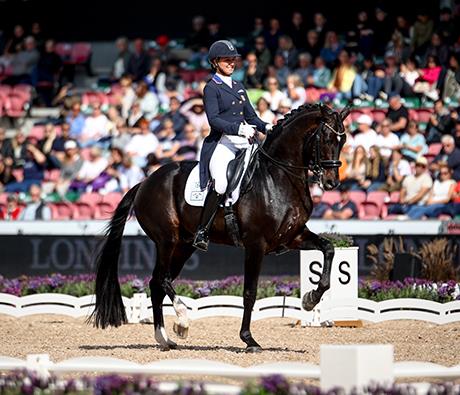 Adrienne Lyle and Salvino. Photo by Matt Turer / US Equestrian.

Coming off a team silver medal at the Tokyo 2020 Olympic Games just last summer, U.S. dressage athlete Adrienne Lyle has not slowed down.

In August, Lyle posted an 83.704% in the Blue Hors FEI World Dressage Grand Prix Freestyle Championship at Herning 2022 on Salvino—the second-highest score of her career and good for sixth place amongst a strong international field. The combination was the only American team partnership to compete in the Grand Prix, Grand Prix Special, and Freestyle at the World Championships, where they also played a key role in qualifying the U.S. Dressage Team for the 2024 Paris Olympic Games.

Ranked 11th in the FEI Dressage World Ranking at the time of her nomination, Lyle took home two national championships at the 2022 U.S. Dressage Festival of Champions, winning the Markel/USEF Young Horse Four-Year-Old Dressage National Championship with Fürst Dream and the Markel/USEF Young Horse Five-Year-Old Dressage National Championship with Valor, positioning herself for an exciting present and future with U.S. Dressage. 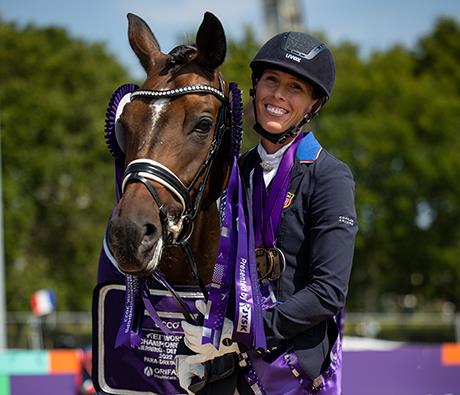 She shone on the international stage, most notably at the ECCO FEI World Championships in Herning, Denmark, where she was the U.S. team’s highest-placing individual medalist. In Herning, riding her own mare Quiana, she scored a personal-best 80.275% to win the silver medal in the FEI Para Dressage Grade IV Freestyle. The pair also contributed the highest score toward the Adequan® U.S. Para Dressage Team’s team bronze effort, which qualified the U.S. for a team berth at the Paris 2024 Paralympics.

Riding Quiana and Solitaer 40 during 2022 season, she also earned a team silver and individual overall CPEDI3* championship in Doha, Qatar, as well as top individual CPEDI3* results in Wellington, Fla., and a team victory and individual reserve honors in Tryon, N.C., among other notable achievements.

Shoemaker’s contributions to para dressage in 2022 went beyond her own competition performances. Through her mentorship and coaching, and through training and lending horses, she has made a lasting impact on the sport. In 2022, she helped put together four horse-and-rider partnerships, including helping her Herning teammate Roxanne Trunnell secure the ride on Fortunato H2O. In October, she also coached a pair of up-and-coming riders at the Perrigo CPEDI3* at Tryon: overall winner Fiona Howard and junior rider Genevieve Rohner, who achieved a personal best score.

And the nominees for International Horses of Honor: 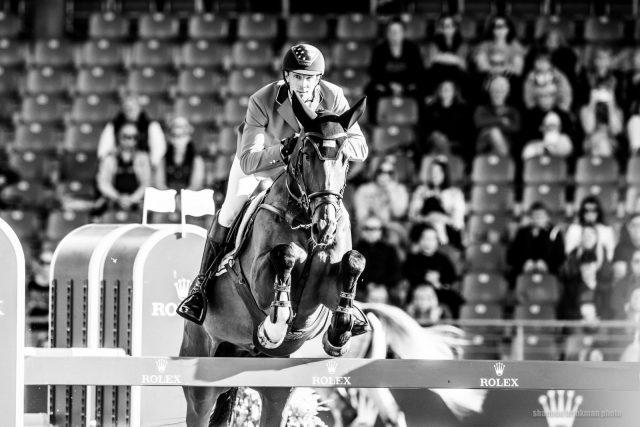 Will Coleman and Off the Record. Photo by Shannon Brinkman Photography.

Off The Record, frequently called “Timmy,” began his international career with Olympian Will Coleman in 2015. Seven years into that partnership, the combination was as strong as ever in 2022. Off The Record and Coleman finished 12th at the Land Rover Kentucky Three-Day Event presented by MARS Equestrian™ CCI5*-L and two months later placed sixth at CHIO Aachen as a member of the Land Rover U.S. Eventing Team.

A top-three finish at the Great Meadow CCI4*-S set up Off The Record for three days of key results at the Pratoni del Vivaro 2022 FEI World Eventing Championship. After a 26.4 dressage score, Off The Record and Coleman were trailblazers for the Land Rover U.S. Eventing Team on cross-country day, finishing just two seconds over time. On show jumping day with medals on the line, Off The Record and Coleman produced the only clear round for the team, managing the questions asked throughout the difficult track with poise, demonstrating the scopiness, rideability, and talent the 2009 Irish Sport Horse gelding is known for.

The pair finished as the highest-placed individual U.S. combination in Pratoni del Vivaro, taking seventh place overall and helping the U.S. to a silver medal—its first eventing team medal at a World Championship since 2002. 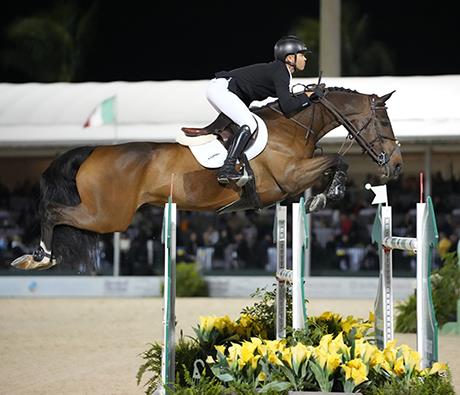 Orafina has been a member of Kent Farrington’s string for the past two years, developing through the levels to become a top international CSI5* horse. The pair started the 2022 season with several top placings in Wellington, Fla., at the Winter Equestrian Festival, including a win in the $75,000 Adequan® WEF Challenge CSI5* and a second-place finish that same week in the $406,000 Douglas Elliman Grand Prix CSI5*. They also captured a win in the $140,000 Bainbridge Companies Grand Prix CSI3* just a few weeks later. Farrington then traveled to Thunderbird as part of the NetJets U.S. Jumping Team where he and Orafina earned top honors in the $186,900 Longines Grand Prix CSIO5*.

With Orafina in top form, the pair secured several podium-topping performances at Spruce Meadows before continuing their Canadian tour success, notching another victory in the $215,000 RBC Grand Prix CSI5* in Ottawa to mark their ninth victory together in 2022. Farrington piloted Orafina to another international win in Tryon, taking the $139,000 Horseware Ireland Grand Prix CSI3* with the pair closing out their season in California, earning a final win in the $74,200 CWD Jump-Off Challenge CSI5* and a second-place finish in the $450,000 Marshall & Sterling Grand Prix CSI5*. 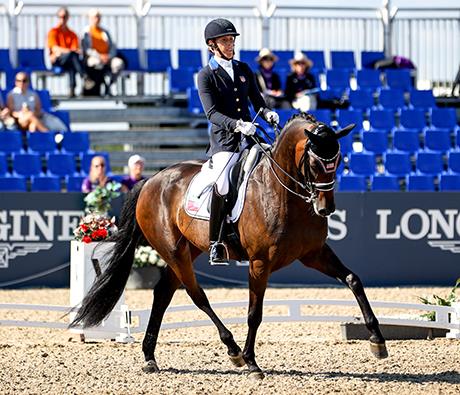 Quiana began her partnership with Paralympian Kate Shoemaker in January 2022, and the pair quickly became a winning combination. Quiana and Shoemaker won their first CPEDI3* together and helped the Adequan® U.S. Para Dressage Team earn the silver medal at CHI Al Shaqab in Doha, Qatar. They finished in the top three in the Grade IV classes at their next CPEDI3* in Randbøl, Denmark, including a personal-best 75.813% in the Individual Test.

The impressive results secured Quiana and Shoemaker a spot on the Adequan® U.S. Para Dressage Team at the ECCO FEI World Championships in Herning, Denmark. The duo helped the U.S. earn a team bronze medal and qualify for a team berth at the Paris 2024 Paralympics. Quiana and Shoemaker closed out the World Championships by scoring a personal best 80.275% to win the silver medal in the FEI Para Dressage Grade IV Freestyle and being the U.S. team’s highest-placing individual medalists.

Following their World Championships success, Quiana and Shoemaker finished their remarkable 2022 season by sweeping the Grade IV classes at the CPEDI3* in Riesenbeck, Germany. With Quiana’s help, it was the first time that Shoemaker topped the podium at an international competition in Europe. 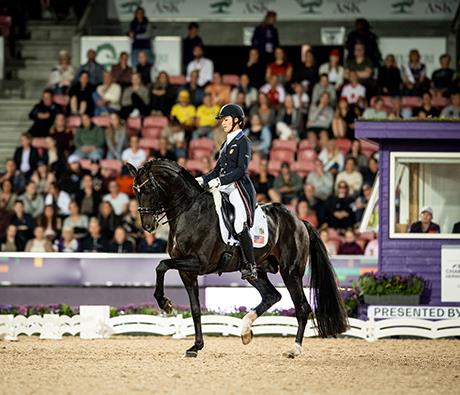 Currently ranked 11th in the FEI Dressage World rankings with Olympian Adrienne Lyle, Salvino closed 2022 as one half of the top-ranked U.S. Dressage combinations in the world. And for good reason.

Success for Salvino, also known as “Vinny,” started at the 2022 Adequan® Global Dressage Festival in February and March. At AGDF 7, he and Lyle placed first in the CDI5* Grand Prix and Grand Prix Special. Then, at AGDF 11, another first-place finish, this time in the CDI4* Grand Prix.

Salvino added to a long list of career accomplishments during August’s Herning 2022 FEI Dressage World Championship where, with Lyle, he was a part of the only The Dutta Corp. U.S. Dressage Team combination to compete in the Grand Prix, Grand Prix Special, and Freestyle in Denmark. In the Freestyle, Salvino posted the second-highest score of his career with an 83.704% that put him and Lyle sixth in the extremely competitive Blue Hors FEI World Dressage Grand Prix Freestyle Championship.

A 2007 Hanoverian stallion owned by Besty Juliano LLC, Salvino notoriously loves showing off for a crowd, and Lyle felt the excitement and energy in Denmark. The pair have successfully completed three championships together. Lyle says that she’s grateful and cherishes everyday she gets to spend with Vinny as the pair has formed an incredibly close partnership over the past seven years.