William Micklem returns today with the fourth column in his series on the subject of happiness, which has resonated with many EN readers around the world. If you missed them: part 1, part 2, part 3. Thank you to William for writing, and thank you for reading. 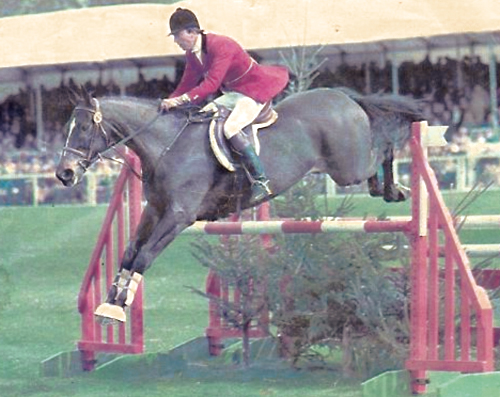 My brilliant brother Charlie on Village Gossip at Badminton in 1981. He was one of only two riders clear inside the time. The other double clear: a young Mark Phillips on Lincoln winning Badminton for the fourth time. Photo courtesy of William Micklem.

Do people who are very particular about small things drive you mad? There is a solution. What you do is to rename these small things “action steps.” Because the very definition of action steps is that they are easily achievable. The truth is that small things matter, and the importance of both action steps and marginal gains are recognized in sport and business worldwide; and without doubt marginal gains can make a huge difference to both happiness and performance in the equestrian world.

Small gains are everywhere, but in the context of equine happiness there are two regularly used words that hinder our effort to produce happy athletes. The two words are “submission” and “losgelassenheit.”

Look for acceptance instead of submission

Submission is the word that appears at the bottom of every dressage sheet as one of the four collective marks, yet it leads riders astray and does little for the horse’s happiness. I always use the term acceptance instead of submission because there is an important distinction between the two words.

Acceptance leads to trust, partnership and agreement, and requires that the horse understands what is required, while submission produces an unquestioning follower. The difference between acceptance and submission is the difference between a horse that knows he could react differently but chooses not to, and a horse that knows there is no other option.

This is quite a subtle distinction, but it makes a huge difference to the effort that a horse is prepared to put into his work and the amount of work he will undertake. It also makes a huge difference to the attitude of riders, possibly subconsciously, with the rider looking for submission often going on too long and too strong and damaging a young or older horse. So we must not neglect the mental side if we want high-level physical performance. The horse is not a machine and a rider who is just a mechanic will make a poor trainer.

Acceptance cannot be achieved instantly because the horse must first understand your aids and what is expected of him. Your aim and responsibility is to gradually create a mutual respect between you and your horse. Anything less than this is not acceptance but submission.

There is also a problem with the translation of the word losgelassenheit, which is listed as the second part of the German Scales of Dressage Training. What does it mean?

It is now usually translated as looseness or suppleness, but in German looseness is lockerheit, and suppleness is geschmeidigkeit. So why was the specific term losgelassenheit used? It is a noun that has been created from the verb loslassen, meaning ‘to let go,’ therefore losgelassen ‘to have let go’ or be comfortable mentally. (Heit is just an ending that changes verbs and adjectives into nouns.)

The key point is that it refers to a mental not physical state. This makes much more sense as otherwise there would be no parts of the training scale with a specific mental dimension, despite the fact that it is obviously vital to have calmness and mental ease as a basic prerequisite for good physical performance. To neglect the mental component will undoubtedly reduce the potential of your horse.

Thankfully in dressage Carl Hester and Charlotte Dujardin have changed attitudes. Obvious tension is now more heavily penalized and Grand Prix horses are definitely looking happier and showing more losgelassenheit. But the physical qualities of suppleness and looseness are not losgelassenheit. They are something you develop in a horse over a long period of time, using the beautiful progression of exercises, as you work towards maximum impulsion.

It is also worth pointing out that we are regularly told that the Scales of Training are “classical,” but they only came to prominence in the 1950s. The three fundamental classical principles dating from Xenophon, 2,400 years ago, are: 1) that the horse should be developed naturally, 2) that force should not be used, and 3) that the result should be beautiful and beautifully easy … in short, happy athletes. Trainers who follow these principles “have more common threads than knots,” as a former Canadian student of mine, Paige Wilde, wrote to me so memorably last week.

A powerful tale of three horses

In my last article I talked of four main reasons for a horse’s unhappiness: Isolation, Inactivity, Injury and Insanity. However there is another I to add to the list as a reason for both a lack of acceptance and unhappiness. It is Illness or Ill health.

I have experienced a number of “difficult” or “unwilling” horses in my life that were later found to be suffering from an illness. Probably the most fascinating example concerns three very talented half sisters and brothers that my Father, Dick Micklem, had in Cornwall in the 1960s.

As part of his horse business my father had hundreds of young horses over the years that were backed and ridden away, and most were riding through the quiet Cornish lanes in a matter of days, initially using a method that was similar to that which Monty Roberts uses. However we had three youngsters who tested everyone to the limit. They were all out of the same mare, Black Velvet, who herself became a broodmare because no one could ride her.

The first youngster was a mare, who we christened Duchess of Argyll after the lady whose divorce was a great scandal in England in the early 1960s. Others had tried to “break” her before but this lady was not for breaking. She was gentle in every way until you tried to ride her, when she would show an impressive athletic talent, culminating in her shooting the saddle over her head by lifting both fore legs to her nose and ducking her head, before returning to her best angelic look.

My father persevered and thoroughly enjoyed working with her but it still took nine months for her to “accept” being ridden. She was fantastic. Probably the best all round horse I ever sat on apart from Karen O’Connor’s Biko. She was sold to Judy Bradwell, the British leading rider, trainer and judge, who was then a teenager. They won the individual Pony Club national eventing championships together and then in adult competition Duchess went on to become her first Advanced event horse. 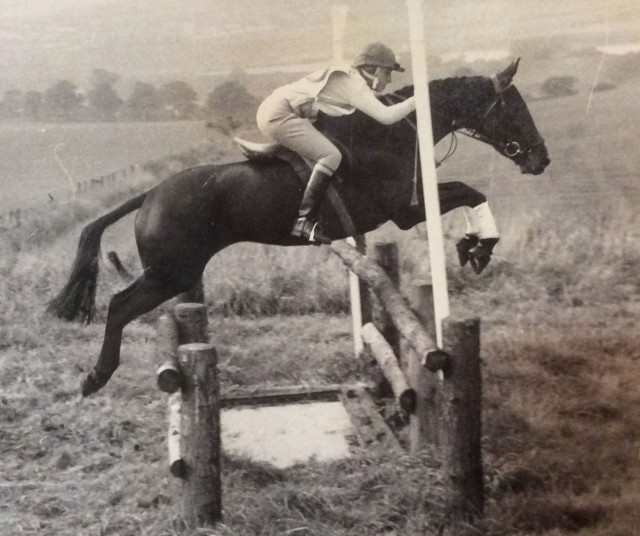 International rider, coach and judge Judy Bradwell on Duchess of Argyll at her first adult official horse trials in 1966 at Wakefield in Yorkshire. They upgraded to Intermediate in their first year, winning three. Judy was Britain’s leading rider for three years, winner of Burghley and in recent times dressage trainer of the New Zealand team. Photo by Judy Bradwell.

Our second offspring out of Black Magic was a gelding named L’Empereur. He was supposed to be called Little Emperor, but my inability to pronounce this to the entries secretary at his first show meant that he became L’Empereur, or Lomp for short.

He was even more difficult, wild and athletic, and once again had learnt all the tricks of the trade from those who had failed with him before he arrived with us. He took a full year to be rideable. A year that included many hours of being driven in long reins by my father, around the Cornish lanes and visiting local pubs, as he sat joyfully on the hood of a car!

I say rideable but Lomp could only ridden by my very athletic brother Charlie, who had to run alongside the cantering Lomp and vault on, as he refused to stand still to be mounted. He was bought by clients of Cherry Hatton-Hall FBHS, the trainer who taught Princess Anne to ride while she was at Benenden school in Kent. Despite being only 15.1 he finished his career competing at the four star Burghley Horse Trials, where tragically he broke his leg in the open water on the cross country.

The third youngster, another gelding, was the best looking and joy of joys no one had tried to do anything with him before. However it was the same story. This one was not going to be ridden in a few days.

Our hearts sank as we faced a long haul to acceptance. Then after three days my father had him euthanized. My brothers and I were amazed, but the post mortem showed a tumor on the brain. We thought he was just wild but my father knew he was not well, and throughout my equestrian life I have remembered this. I always give difficult horses the benefit of the doubt until I am sure they are not in pain. It shows how wrong it is to assume all “difficult” horses just need to be ridden more forwards.

We should not assume that just because a horse is unwilling, napping, rearing or bucking that they are being naughty and need discipline. A proportion will undoubtedly behave like this because of pain. In addition probably a huge number of horses that are “difficult” have learnt their bad habits while they were in pain earlier in their lives, whether it was from illness or an injury such as a sore mouth or back.

It takes real sensitivity and awareness to distinguish between a horse that is in pain and a horse that has learnt bad habits. Good listening and empathy to horses is both a huge pleasure and a vital part of achieving acceptance and happiness.

As Spanish Riding School legend Alois Podhajsky said, “The first and foremost principle of training is to have empathy with your student.” So as we begin to face up to the idea of what “happy athletes” means we are challenged as people to look at equestrian sports in a new way. Happiness challenges us — to be more inventive, more humane and more holistic in our thinking.

Next time: Yin and Yang number three — the heart of training and happiness, and why your happiness is a priority.