We are delighted to start the new year with a series on safety in eventing from EN guest columnist William Micklem. This is the final column in the series: part one, part two, part three, part four, part five. Click here to read all of William’s guest columns on EN. Many thanks to William for writing. Go Eventing. 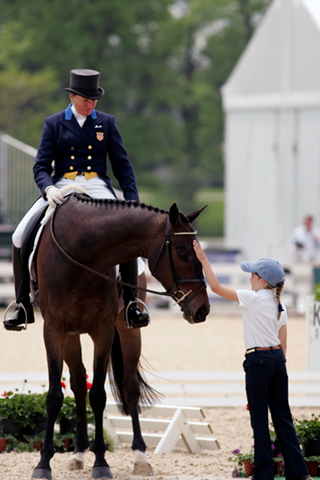 It’s all about opening doors for future generations of riders. William Micklem’s homebred Mandiba is pictured here with Karen O’Connor at Rolex. Photo by Josh Walker, used with permission from the USEA.

Safety is not an ‘us and them’ issue. It is just ‘us.’ The ‘us’ refers to the fact that everyone in our sport has a role to play in safety issues and only by working together can we say we have done our best to keep riders safe. Whether you are a rider, groom, owner, official, supporter, farrier or veterinarian there is no one in the eventing world that has not been personally touched by at least one fatality and no one should fail to take the issue seriously.

How does the world tell the difference

In addition the rider fatalities in eventing do not just reflect badly on eventing but on all of us in the whole sport horse world.  Just as the six horses that died last month during FEI-recognized endurance competitions in the UAE has a negative effect on all horse sports.

As Jimmy Wofford said last week, “Although this scandal is taking place in a separate international discipline, it affects all horse lovers … If we tolerate people who are willing to kill horses for sport, how is the world to know the difference between them and the rest of the horse-loving community?” And similarly (but worst) how is the world to tell the difference between a sport that has killed 65 riders since 1993 and the rest of the sport horse world?

So we as a sport have to take action. It’s not just the ‘powers that be’ but all of us that need to engage with the challenges we have and work to be heard.  But we have failed to do this in recent times. For example the new format for team championships has been greeted with almost universal dismay from international riders from all disciplines. It could have been different but regrettably there was little consultation in advance of this major decision, and that is not acceptable.

So the national governing bodies and the FEI need to remember that it’s not them and us, but just us, and work harder to ensure FEI members and delegates have made a genuine effort to communicate clearly with the riders and all those they are supposed to be representing. And in turn all other groupings need to be willing to engage and communicate … and in the case of eventing all of us should do this with a main aim of eliminating rotational falls.

We can prevent rotational falls

Three of the riders who have died from rotational falls were friends of mine. What has driven me to stay involved in safety issues is that all three of these deaths could have been prevented, as they were all accidents waiting to happen rather than freak and inexplicable accidents.

One of these deaths could have been prevented by using the EquiRatings Quality Index system; one by dressage training that did not create huge resistances; and one by dressage and jumping training that did not enslave the horse. However, and this is the crucial point, almost certainly all three lives would have been saved with deformable technology.

However, all this is a medium and longterm strategy that will always miss out some riders. But what we can do in the short term that will protect almost all riders is to use deformable technology. It is difficult to see how anyone can argue against this.

The advantages outweigh the disadvantages

Is it going to encourage more riders to take risks and get away with bad riding? Possibly in a few cases. But surely this is a price worth paying to save lives and surely we can find ways to penalize bad riding more effectively in a parallel strategy to prevent accidents.

The other great advantage of this strategy is that it will allow course designers to continue to challenge the best with the right combination of demands on both bravery and technical ability, without turning courses into lower level challenges with masses of brush for the horses to go through. The talent and ability of the top riders and horses is wonderful and the sport will be the loser if we downgrade the level of the cross country. Especially as the cross country is the central discipline and heart of our sport.

Ironically the new FEI championship proposals, that are intended to make championships easier, actually does the reverse in one way. As Mark Phillips wrote last month in Horse & Hound: “Another concern is that championships and four-stars have historically been run at at least 140m per jumping effort. We are now proposing to come down as low as 126m per effort — halfway to the CIC ratio, but over a ten minute course rather than a six or seven minute CIC track. Isn’t that a safety worry?”

Yes, it is an obvious safety worry, and one that would have been picked up long ago and changed if it was ‘us’ as opposed to ‘them and us.’

All for one, one for all

Education and shared knowledge between all parties must be at the heart of all cross-country safety initiatives. So we all have to share and let good ideas give way to better ideas, and this includes course designers, technical delegates, riders and the FEI. Anyone who wants to be a success in horses knows that you have to be part of a team, working for each other, and putting safety as a priority.

This was not always the case in the early days of eventing, and sadly occasionally in more recent times, when decisions were not always taken with safety in mind. For example, in 1968 at the Mexico Olympics. Mexico City proved a challenging site as it was 2,300 meters above sea level, resulting in 30% less oxygen in the air.

It was also known for intense rainfall from October to March, a fact that was ignored and which resulted in very serious difficulties for the competitors. Huge rains caused the river at the second last fence on the cross country to burst its banks towards the end of the day and became a 12-meter wide torrent.

Were the competitors stopped on course? No! Ireland’s Tommy Brennan and his horse March Hawk bravely jumped in but were swept downstream in the raging torrent. The horse could swim, but Brennan couldn’t and he only survived by clinging onto the saddle until he was hauled out of the water by the then FEI President HRH Prince Phillip! Another example of the good auld days not being so good, especially as two horses died that day.

Good for the rider …

Tommy Brennan had been fourth at the 1964 Tokyo Olympic Games on Kilkenny, who was later to find more Olympic glory with Jimmy Wofford. In addition he also rode on the show jumping team at the Mexico Olympics, and after retiring from riding went on to design the iconic track at Punchestown for the European Championships in 1991. So he knew a thing or two about high-level performance.

But at heart Tommy was a hunting man and a people man. He loved the thrill of crossing the country jumping whatever was there in the company of his friends, most of whom were lower level riders. He knew what a huge contribution cross-country riding made to the lives of these people, not just their riding lives but their whole lives.

Riding outside is good for the vast majority of us. It stimulates our brains and allows us to do more with our lives as we feel better and more empowered. We can’t live our lives in some super safe cocoon, and it’s not living if we stay anchored to the couch in front of the television. The very nature of cross country means that there is more risk for rider and horse than in dressage, but riders round the world have had their lives immeasurably enriched and senses heightened by riding across country and we need to recognise how important this is.

What is also true is that horses love getting out and about.  The gradual change the horse world has experienced to riding largely in arenas is probably the biggest challenge we face, both in terms of humane treatment of horses and introducing the next generations to riding.

“Oh, give me land, lots of land, under starry skies above,

Let me ride through the wide-open country that I love,

Let me be by myself in the evenin’ breeze
And listen to the murmur of the cottonwood trees,
Don’t fence me in.

Just turn me loose, let me straddle my old saddle

The sport of eventing is the driving heart of pleasure riding because the research shows that the majority of us don’t want to be fenced in. In addition the event horse is the ideal pleasure riding horse because we need a horse that can go outside of an arena and easily do a little of everything, rather than be anchored to a sandy rectangle.

… and good for the horse

What is more event riders will quickly learn to make decisions in favour of their horse rather than their own performance goals. It has to be that way because eventing brings an increased emphasis on horsemastership and partnership. Such lessons are rare in sport, but sacrificing individual goals for the need of others is a vital life lesson and gives added value to eventing.

Yes, a very small number of horses break legs or have other fatal injuries when doing cross country, and to lose even one horse is a tragedy. But the the room for error can be increased, making it safer for horses as well as riders, and I totally believe that the majority of horses would metaphorically vote in favour of cross country.

Who has not observed the pricked ears and enthusiasm of a horse going out for a ride in a bigger area, or who has not experienced the squeals of delight or playful leaps of a horse going across country? The research shows lower stress levels for a horse riding outside rather than in an arena and I believe it puts our sport in profit and justifies the inherent risks to the horse.

It is so easy to do nothing and say nothing about these safety matters, leaving it up to ‘the powers that be’ to possibly take action? But all of us have a stake in our sport and we need an ‘us’ philosophy if there is going to be definite action both to successfully promote our wonderful sport of eventing, within and outside the equine world, and substantially reduce the number of fatalities.

It is not only for what we do that we are responsible, but also for what we don’t do. If we don’t improve complementary training for eventing, and if we don’t use deformable technology to a greater degree, then we are all responsible for the consequences. It is up to us.

Did you miss one of William Micklem’s column in this series?