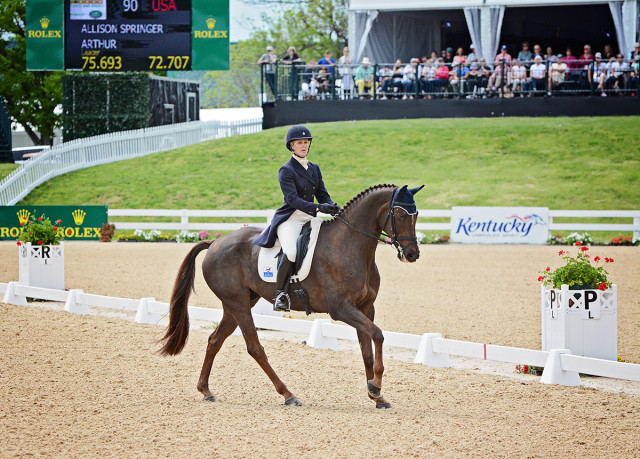 It came down to the final dressage test of the Rolex Kentucky Three-Day Event to find a combination that could mount a charge against the indomitable Michael Jung and his rockstar mare fischerRocana FST. After scoring an eye-popping 34.4 in their test yesterday, it seemed unlikely that anyone would catch Michael and “Roxie” as they look to replicate their win from last year.

But Allison Springer and Arthur managed to chip away at his monstrous lead a bit more, making their seventh Rolex dressage test one to remember with a score of 39.7 to take second place at the conclusion of the first phase.

That’s 0.2 penalty points higher than their best career Rolex score, which they achieved in their last appearance at the event in 2014, but it was still the only other score to crack the 30s, and that’s a big reason to be proud of Allison and her longtime partner Arthur tonight.

Coming off a big win at Carolina International CIC3*, Allison and Arthur, a 17-year-old Irish Sport Horse gelding owned by the the Arthur Syndicate, will look to keep their cross country mojo alive as the final pairs to go tomorrow. Not only are they facing a beefy Derek di Grazia track, but there’s also the added unknown element of what tomorrow’s forecast will bring. 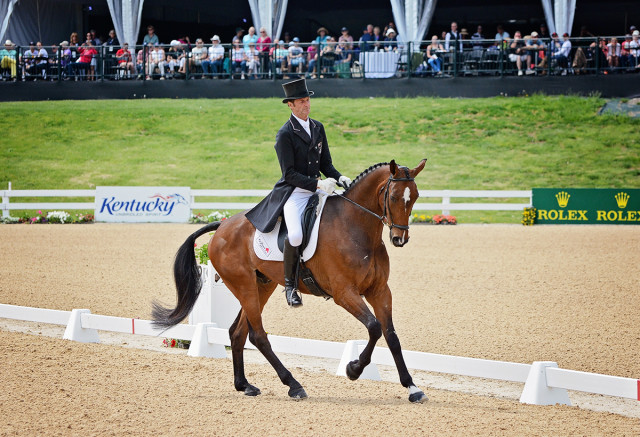 Weather.com is currently predicting an 80 percent chance of rain, with scattered thunderstorms throughout the morning and more storms rolling in during the afternoon. Michael Jung and Allison Springer both detailed their cross country strategies during this afternoon’s press conference, which you can watch in full at this link.

Marilyn Little and RF Demeter led the U.S. charge this morning with a career best CCI4* score of 42.5, which has them sitting in third place after dressage. The 14-year-old Oldenburg mare owned by Jacqueline Mars, Raylyn Farms and Patrick Witte looked relaxed and happy to be doing her job — absolutely a pleasure to watch..

Liz Halliday-Sharp and Fernhill By Night and Phillip Dutton and Fernhill Fugitive are still sitting tandem near the top of the leaderboard thanks to lovely performances yesterday. Allison’s score bumped them down one more spot to slot Liz and Phillip into fourth and fifth places on 43.0 and 43.1, respectively.

Numerous other top combinations tried to catch Michael Jung’s leading score in the afternoon session, with Mark Todd and his 2012 London Olympic partner NZB Campino putting in a valiant effort to score 43.2, which ties them for sixth place with Hannah Sue Burnett and Jacqueline Mars’ Harbour Pilot. 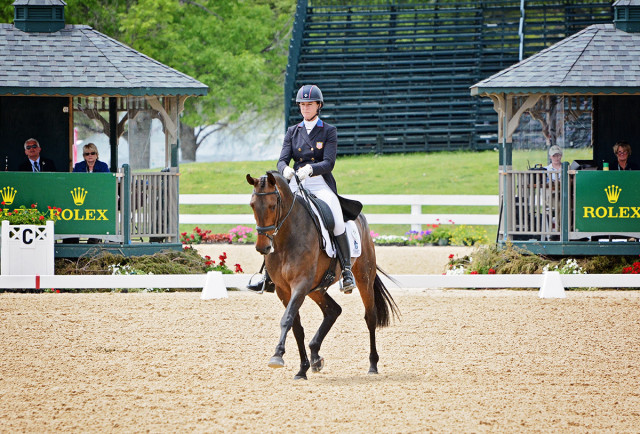 Lauren Kieffer and Veronica easily had one of the largest cheering squads today, led by her proud parents Kevin and Jo, and it definitely gave them the boost they needed to thrown down a 43.9, the best four-star score of their career. That puts the 14-year-old Dutch mare owned by Team Rebecca, and better known as “Troll,” in eighth place heading into cross country.

Boyd Martin and the Shamwari 4 Syndicate’s Shamwari 4 held onto the top 10 spot from yesterday, ending the second day of the competition in ninth place on 44.6. That’s also the best four-star score of the 14-year-old Hanoverian gelding’s career — adding one more to the encouraging amount of personal best four-star scores from the U.S. contingent.

Jessica Phoenix and Don Good’s Pavarotti also narrowly bested their previous best four-star performance, scoring 44.7 to round out the top 10 and end the first phase as the highest placed Canadian pair. The 14-year-old Westphalian gelding is one of three horses Jessica is competing, though she told us earlier in the week she will likely only take one around cross country 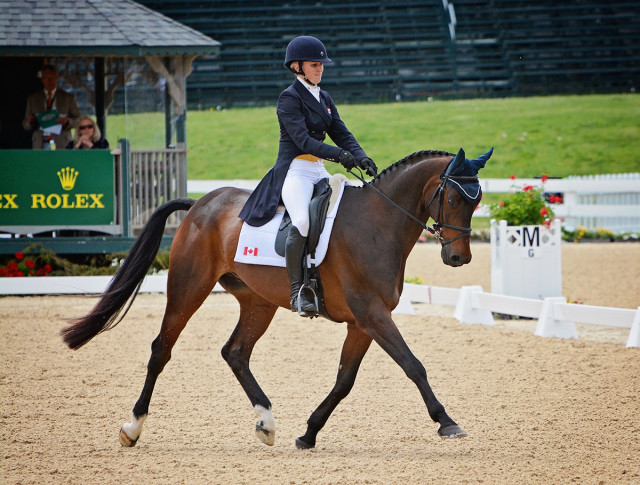 Breaking news for all EN readers: John made his annual pilgrimage to Rolex this year and has resumed his tradition of cranking out random bits and pieces of #RK3DE knowledge. Here are our observations after the first two days of dressage: 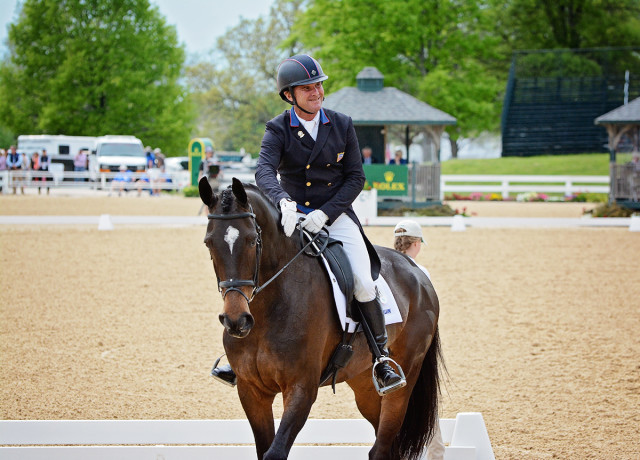 EN reader and USEA Hall of Famer Denis Glaccum pointed out that 21 U.S. combinations delivered sub-50 dressage tests: “A great step forward — to have over 20 with better than 50 penalties is a giant improvement in American dressage performances at the four-star level. Well done. Tomorrow hopefully will be as rewarding.” Well said, and we couldn’t agree more.

As John alluded to, scores are very tightly bunched at the top of the leaderboard. About 10 penalty points separate the top 10, and the consensus from the riders is that the optimum time of 11 minutes, 15 seconds will be difficult to make. With the end of the course stacked with tough combinations, it will be especially difficult to make up time in the final minutes.

While we don’t know how tomorrow’s cross country day will play out, here’s what we do know: John and I will be running live updates on EN and Twitter all day tomorrow to keep you updated. USEF Network and FEI TV are both live streaming cross country, with good friend of EN John Kyle at the helm of the commentary team. 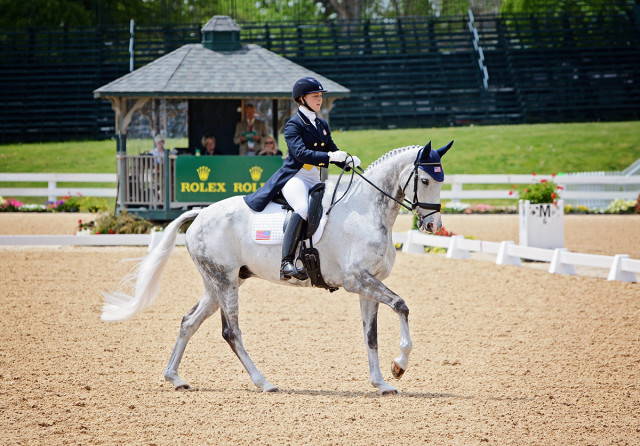 EN’s 4th Annual Insanity in the Middle Tailgate presented by World Equestrian Brands is sure to be a rowdy hot mess and a stop you absolutely have to make during your day. Free beer! Free food! Free T-shirts! Celebrity guests! Live chinchillas (and the Chinch himself). Click here for everything you need to know about the tailgate.

In addition to EN’s open threads (morning post here and afternoon post here), we’re been posting plenty of other content throughout the day that you can catch up on here. Samantha has been doing amazing ringside interviews with the riders after their tests. Click here for her day one interviews and here for day two.

Rolex is our Super Bowl, and it takes a huge support crew to keep EN running smoothly during this crazy event. We have to thank the amazing press team, headed by none other than Marty Bauman, and all the volunteers who make Rolex possible. And we’re sending the biggest shout out of all to these amazing Pony Clubbers, who scored a 10 on their sychnronzied walk for sure.

You can watch Allison’s dressage test and a Day 2 recap video below: 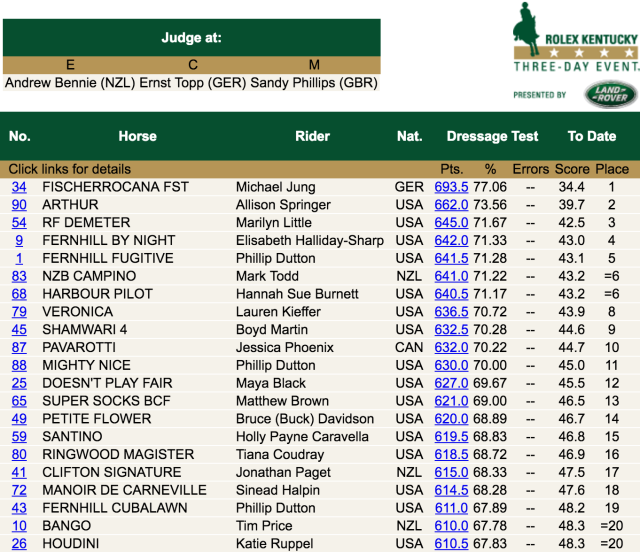