The Tokyo field has been thinned by one after dressage, as Belgium’s Lara de Liedekerke-Meier made the tough decision to withdraw Alpaga d’Arville due to a minor injury. The pair, who were competing as individuals and were Belgium’s lone representatives, were sitting 48th overnight on a score of 37.2.

In a statement on her social media this morning, Lara’s team said: “It’s with great sadness and disappointment that we have to announce the withdrawal of Alpaga at the Olympic Games. Lara was not feeling him 100% in and after her dressage test and a full check-up revealed a small but at the moment painful injury that he must have sustained in the warm up. As Alpaga’s health is paramount to us we took the only possible decision and withdrew him. After having a very good trip to Tokyo and feeling strong and ready to tackle the Games this is a hard pill to swallow but we would like to thank the whole Belgian team at Tokyo and our great team at home for all their support in this tough moment and we will give our best to come back harder and stronger.”

We’d been planning to run a web story on Lara and Alpaga, who is a homebred horse – and even though their Tokyo journey sadly ends today, their story remains a wonderful and inspiring one, and so we’d like to share it with you nonetheless. Here’s an excerpt… 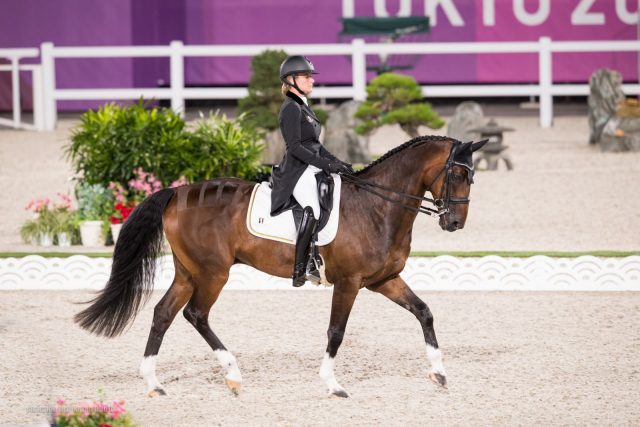 Belgium’s Lara de Liedekerke-Meier makes her Olympic debut this week, and got her competition started by posting a 37.2 with the 15-year-old Belgian Warmblood gelding Alpaga d’Arville on the first day of competition. Riding at the Olympics is always special, of course – but for Lara, bringing this partnership to the world stage is particularly poignant, as Alpaga is a homebred. He’s also a maternal half-sister to Nooney Blue, the mare with whom Lara made major waves as a Junior and Young Rider before making the step up to Senior competition. They represented Belgium at the World Equestrian Games in Lara’s first year out of Young Riders.

“I rode his sister [Nooney Blue] at the WEG in Kentucky in 2010, and we received the mother from nowhere – the seller of the mare called my dad one day and said, ‘I have a Thoroughbred in the field, and it’s the mother of the one I sold you. She’s 22, so I’m not sure what I’m going to do with her. You have a lot of fields at your place; what about taking her?” My mum was like, ‘no, no, it costs money!’, but my dad said, ‘yeah – and we have fields!'”

The de Liedekerkes decided to take the mare, Mooney Raaphorst, and see if she could find herself a job on the farm. Almost entirely by chance, they happened upon the stallion they would put her to. Wuunder Boy van de Zuuthoeve, then at the very start of his breeding career, is just 33% blood and boasts impressive jumping lines on both sides: he’s by the Hanoverian Argentinus, himself a prolific jumper and the successful sire of Grand Prix jumpers and dressage horses, and his damsire is the Dutch Warmblood Nimmerdor, who qualified for the 1984 Olympics in showjumping.

“We used the stallion that was, again, pure coincidence: we went to a show and saw this nice four-year-old stallion, and my mum said, ‘it looks a bit heavy and the Thoroughbred is quite thin, so we’re going to go for that.’,” remembers Lara. “And [the foal, Alpaga,] ended up being my horse for the WEG, Europeans, and the Olympics! It’s quite something to have known him from the beginning.” 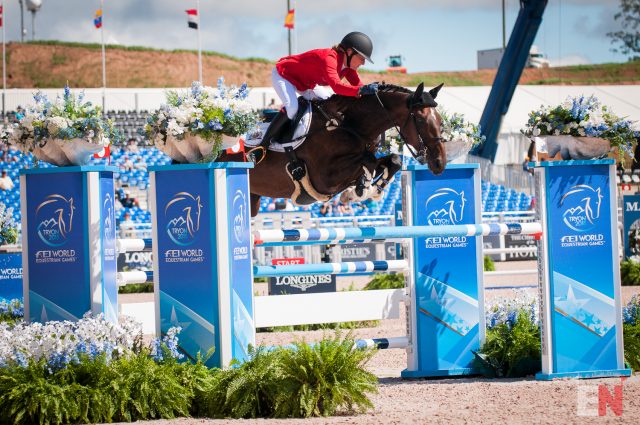 This is Lara’s Olympic debut; she missed London due to horse injury and Rio because she was pregnant. Along the way, though, she’s become one of Belgium’s most stalwart campaigners, with three WEG appearances, four Senior Europeans, two Young Rider Europeans, two Junior Europeans, and two Pony Europeans under her belt.

Speaking after her test, she said: “I could have done better, but it’s the cherry on the cake to be an Olympian. I have to be a bit more strict on myself next time to take more risks, but for our first time, I’m happy and I think my horse did all I asked him to. I can only blame myself, I guess, but I’m really happy!”

Of her much-loved gelding, she joked, “He’s a grinch! He is an alpaca – sometimes he’d like to spit on you, and you know how they get their necks like that. It’s also not so easy when he goes a bit like that with his neck. I said to my mum, ‘we should have called him another name’ – but he really is lovely, and I think he would always try his best for me, and that’s what makes him so special.”

The family legacy continues on apace at home, too: Nooney Blue, Alpaga’s half-sister, is now a fundamental part of the Arville breeding programme. One of her daughters, Hooney d’Arville, stepped up to four-star this year following a top ten finish in the Six-Year-Old World Championship and a run at last year’s Seven-Year-Old World Championship. From one accidentally-acquired little Thoroughbred mare, an extraordinary story continues to unfold – and Lara’s holding the pen to write it.