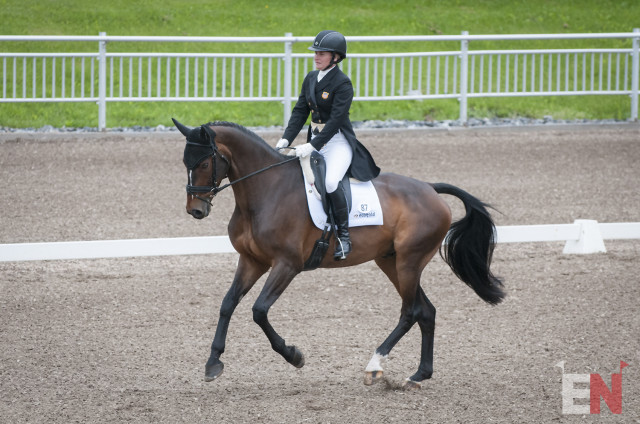 The CCI3* Todd Sandler Challenge and Stuart R. Horne Canadian Eventing Championships CIC3* completed the first phase today under cloudy skies at Bromont CCI in Quebec. Buck Davidson was first in the ring for the CCI3* with Sherrie Martin’s The Apprentice, and their score of 45.9 held for the remainder of the division.

“I thought he was as good as he’s been, maybe ever,” Buck said. “He’s been doing this level for a long time, so he knows the test. I was a little bit bummed with my score going first and was surprised that it held up.”

Bromont happened to be The Apprentice’s first CCI3* in 2012 but this is the first time he’s come back since. Buck rerouted “Dirk” here after retiring on course at Badminton CCI4* last month. “At Badminton I went out and was on the time at seven minutes but losing horse as I went. I think I’ll go a little bit quieter at the beginning (tomorrow) and hopefully come running home. He’s an honest horse. He wouldn’t be the quickest or the sharpest or fastest at anything, but he’s an honest horse and if you aim him at the jumps he will try to go through the flags.”

Buck, who has been competing at Bromont since he was a teenager, echoed the sentiments of many other riders in response to questions about the course and the venue. “The natural terrain is fantastic. Derek (di Grazia) and Jay (Hambly) do an awesome job of putting it together and it’s always a cross country competition here. It’s always difficult. They’ve laid out another beautiful track and it flows nicely…I love Bromont…They get the spirit of the sport here and you feel they really care about eventing.” 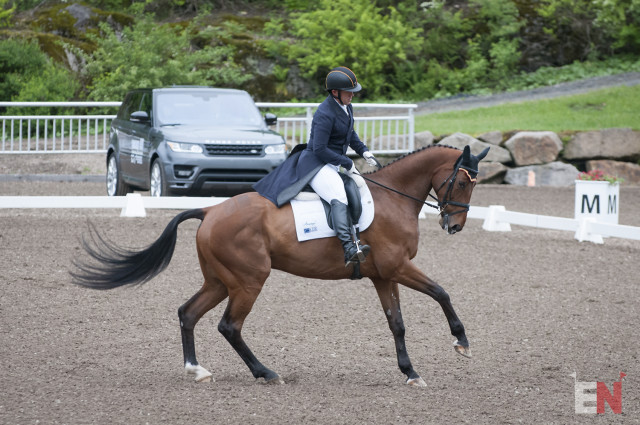 Buck Davidson and The Apprentice. Photo by Leslie Threlkeld.

Will Faudree and Jennifer Mosing and Sterling Silver Stables’ Pfun scored a 48.8 for second in the CCI3*. The 9-year-old Irish Sport Horse gelding just continues to improve as the season progresses, and Will is looking forward to a long career with him.

“I think the world of this horse. Coming back from last year, having my neck injury, I had this goal of doing the three-star at Carolina. Even though it was basically his second Advanced, I’m very comfortable and confident on him and I trust this horse so much. He’s such a genuine creature,” Will said.

Listening to Will talk about “Teddy,” it is clear they have a special bond. Should they have a successful day tomorrow, Will wouldn’t look to attempt a four-star this year although he is confident the horse has the ability. “If he’s goes great here tomorrow, I wouldn’t take him to Burghley this year. He’s only 9. He would be a horse that I would want to really do the most thoughtful thing that I can do to have a very long career on him because if there is one horse that I would like to be on, it’s him.

“My goal tomorrow is to finish with a better educated horse and a horse for the future because I do think a lot of this horse,” he continued. “(Derek di Grazia’s courses) are so designed through the horse’s eyes. I look at some of the stuff and think how will they read this or understand this, but I’ve never come off of one of Derek’s courses – whether it was successful or unsuccessful – and not had a better educated horse. I think that’s a true testament to his course design.” 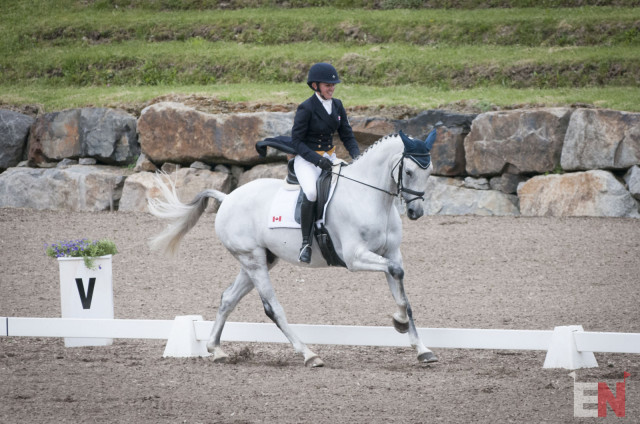 In the CIC3*, Hannah Sue Burnett and Jacqueline Mars’ 8-year-old Cooley Dream produced a lovely test, and their score of 44.3 put them in the lead. Hannah Sue and Cooley, affectionately also known as McDreamy and Cooley Boy, have been partnered for about a year since the gelding was purchased from Piggy French. Hannah Sue says the toughest part about bringing him along is keeping his focus during competition.

“He’s growing up slowly but he’s so fancy and athletic. Everything is pretty easy for him,” Hannah Sue said. “Especially on the flat, he’s getting a lot more broke and he’s understanding what he’s supposed to do in the ring. Instead of looking around quite so much I think he’s really enjoying it and he likes to show off. The more people that are there, he’s even easier to ride.”

Cooley shares the same sire, Cruising, as Hannah Sue’s top horse Harbour Pilot. “‘Cruisings’ are really talented but they are very intelligent and they have opinions about things. I really like that. Once they figure something out and know what they’re doing, you can’t stop them. William thinks he’s very regal and cool. Cooley is like a little baby. He’s such a character. They’re a little bit different but they ride similarly.”

Hannah Sue has applied to go to the Rebecca Farm CCI3* with Cooley and Mary Ann Ghadban’s Under Suspection. Both horses need the CIC3* qualification at Bromont so tomorrow she’ll be riding for clear rounds. 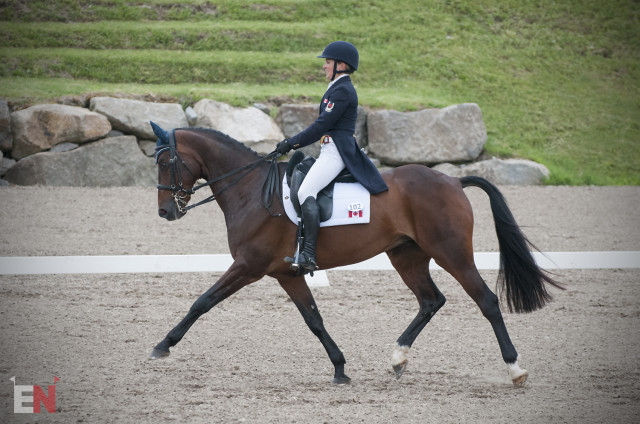 Jessica Phoenix has an impressive four horses entered in the CIC3* and ended up with two in the top three after dressage. Don Good’s Bentley’s Best is second on 45.9 and Pavarotti, also owned by Don, scored a 49.3 for third, despite an error late in the test.

“I was really happy with all four of the horses today. I thought they all put in personal bests,” Jessica said. “(Bentley’s Best) is an exceptional moving horse and has so much presence when he goes in the ring. He’s unusual in that he’s got all this presence and movement but he’s so relaxed, so it’s probably the first horse in my career who is that relaxed in the ring. It’s incredible that you can go in there and get everything you can get in the warm-up in the ring and he just rises to the occasion.

“I was so happy with (Pavarotti’s) test. I honestly thought is was the best performance that he’s ever done. He was so relaxed in his trot work and he just felt like he was enjoying it. I was having so much fun riding him that I was a complete idiot and went down the centerline one movement too early. That was a costly mistake.”

In addition to competing four horses this weekend, Jessica has been helping to promote the 2018 World Equestrian Games at Bromont. She and Canadian dressage rider Belinda Trussell went to Parliament in Ottowa Wednesday night to speak for the Games along with other key individuals involved in the planning and organizing.

“It would leave an incredible legacy for Canada and North America to have another venue of that quality,” Jessica said. “I think they have the people in place that are really going to bring it forward to that next level and ensure that it can be pulled off. Certainly the members of Parliament that were there were incredibly encouraged by it, and I think it just promoted awareness that will promote funding.”

All divisions run cross country tomorrow and thankfully the forecast is showing sunshine and temperatures in the 70s. We’ll be back with much more from Bromont. Thanks for reading! Go Eventing. 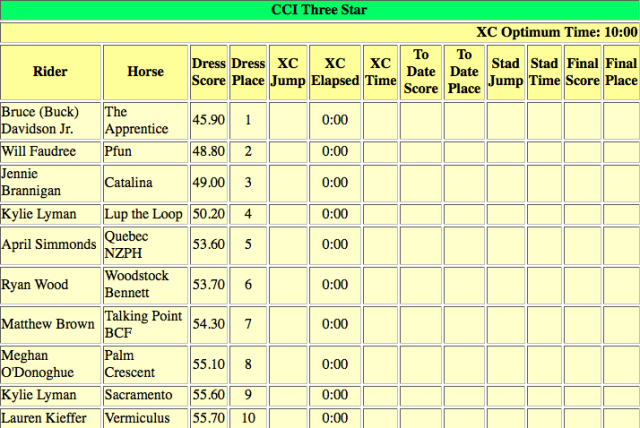 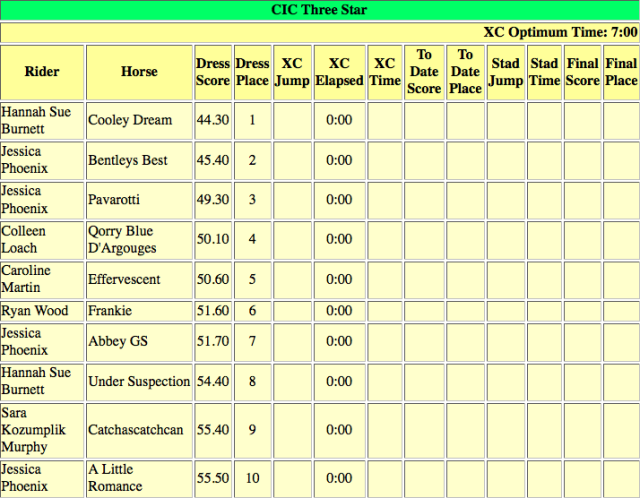