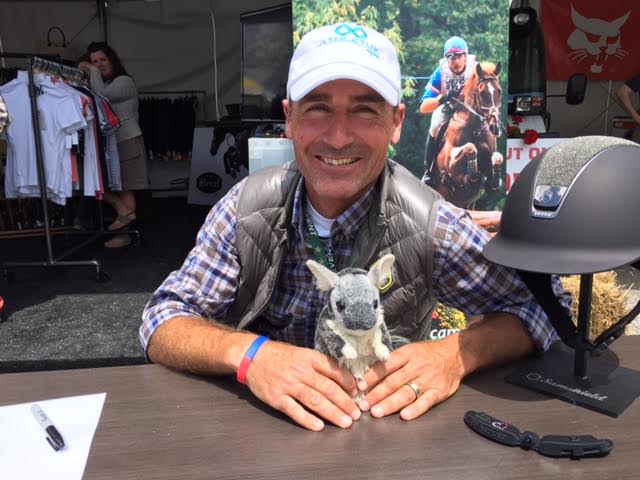 A bit of Chinch for good luck! Photo by Leslie Wylie.

It’s no secret that the EN crew is cheering extra loudly for Matt Brown this week. Jenni and I both picked him as our EN Staff Pick for Best Rookie — you can check out our reasoning here.

The West Coast transplant is making his four-star debut with Super Socks BCF, who has been making three-stars look a little too easy the past couple years.

In addition to CIC3* wins at Rebecca Farm in 2014 and Fair Hill in 2015, they’ve been finishing at the top of the pack consistently both in the States and at their first outing abroad at the Boekelo CCI3* last fall, where they came 6th and were the top-placed Americans in an extremely competitive field.

Being here in Kentucky is no fluke for this pair. “Flaxen” has been qualified for a four-star since Fair Hill 2014, but Matt has been biding his time to make sure his horse had a carefully measured preparation for the big step up.

The 10-year-old copper-hued Irish Sport Horse, owned by the Blossom Hill Foundation, is one of the U.S.’s most exciting equine talents — he’s fancy on the flat and a true-blue jumper who as never had a cross-country penalty in his life.

Thus far all is going according to plan, a blueprint that Matt prophetically outlined to EN a year-and-a-half ago.

“I’d like to get a couple more three-stars done before we start thinking about four-star,” he said at the conclusion of their first three-star season. “Once he’s feeling confident at that level, then we’ll go ahead and tackle our first four-star. So with that said, our goal for 2016 is Rolex and, ultimately, the Olympics.”

And now here they are, on the day of the biggest event of their lives. I’d add a “no pressure, Matt” clause in here, but he already seemed quite calm and collected when I caught up with him yesterday at the Bevel Saddlery booth where he was signing autographs.

He kindly took a moment to talk to us about his preparations, hopes and expectations for the big weekend to come:

Best of luck to you and Flaxen, Matt. Go Eventing.