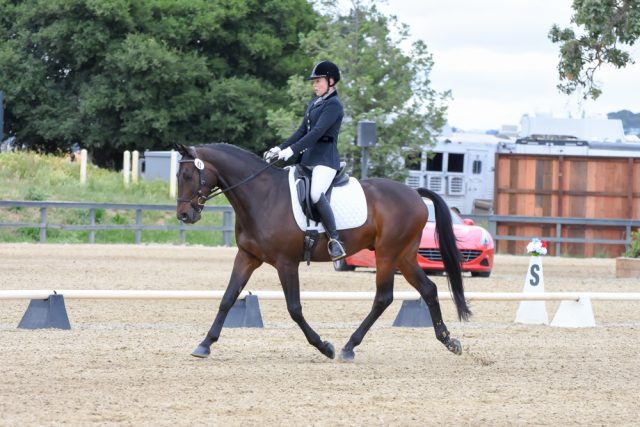 This weekend is chock-full of competition both domestically and internationally, and standing proudly on the West Coast is the Spring Event at Woodside which once again features the $15,000 Preliminary Challenge. After a full day of dressage, Erin Kellerhouse and  Leslie LaBraque emerged as the best placed in the two challenge divisions.

In the Preliminary Challenge Rider division, Leslie LaBraque and her own Falkonet, an 18-year-old Thoroughbred, found themselves at the very top of the leaderboard after securing a score of 30.2 on the flat.

“I was shocked actually. I went off course twice!” Leslie said in disbelief. “The second time I just completely lost focus, but in my mind I was like, ‘just do good on the other stuff.’ After the first mistake, seeing people in the past do so well, I thought, ‘I’m done.’” Little did she know that she was far from finished as they now lead this 21-entry division.

Without daily access to a riding arena, Leslie and “Falco” have gotten creative. “At home I don’t have a dressage arena. I ride in between orange groves and I take him to the beach once a week. It has really helped our lateral work. When the waves come in he’s like ‘Whoa!’” Leslie explained as she reenacted his leg yielding abilities. “I recommend that for anyone who is having problems with lateral work!”

This duo have been together for two years, and competing in the Preliminary Challenge has been a major bucket list item they can finally check off. “I got Falco two years ago and he was owned by professionals and I’m an amateur and my goal was to do the Prelim Challenge and to do a one-star, so I’m living my dream right now. I’m almost 60 years old!” she beamed. 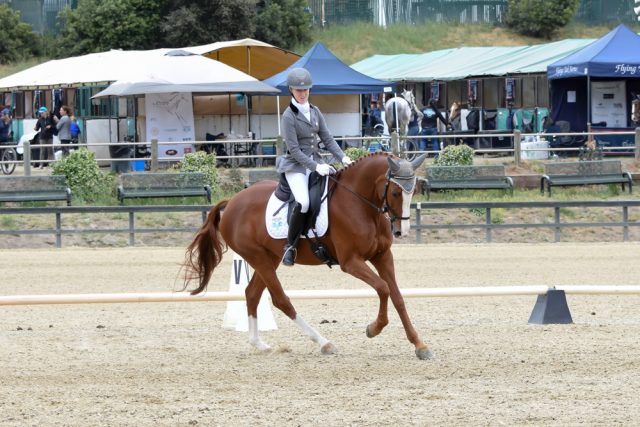 Mallory Hogan piloted her own Clarissa Purisima to second place in this division. The 9-year-old Holsteiner mare (Limmerick I x Briza) sits on 31.4 penalty points.

“I was really happy with her. I was a little concerned as to how she would handle the environment for her first time being in that big ring, but she went in and she was really focused. I asked her to do her job and she was really on task. I’m so proud of her,” Mallory shared.

This pair have eyes on representing Arae VI for a second time at NAJYRC this summer, and the Preliminary Challenge is proving to be a perfect preparation. “I got her to be my Young Rider horse and to move up the levels,” Mallory explained. “She’s a really good horse with a great brain. I’ve had a really great time experiencing everything with her. We decided to do the challenge this time as a fun way to get in a competitive division before Montana.”

Alyssa Schaefer and her own Fuego, an 8-year-old Dutch Warmblood, round out the top three on a score of 33. Margie Davis takes fourth place on her own Luminescence with a score of 33.2, and just behind in fifth place is Lauren Henry and her own Improvisor on 33.3 points. 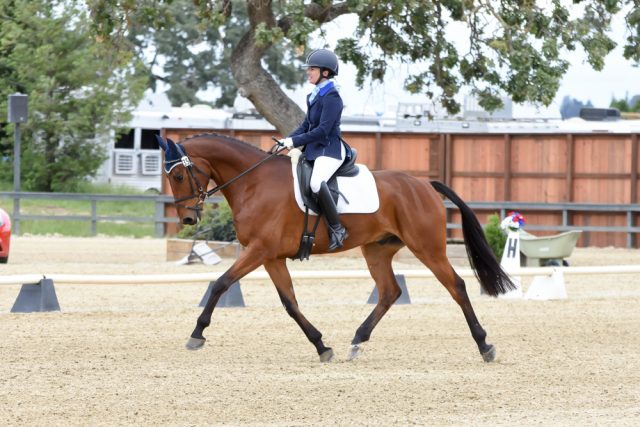 Woodford Reserve, who was identified just six days ago in our “EN’s Got Talent” series, leads the Preliminary Challenge Horse division with Erin Kellerhouse in the tack.

“He was very business like he went in there and did his job. He was just a good boy and with me every second,” Erin said. “I thought his medium trot was really nice, and he’s always relaxed in the free walk. The reinback was the only part that I didn’t like. He’s a little offended by it. He doesn’t understand why he has to back up.”

The 6-year-old Irish Sport Horse by Tinarana’s Inspector earned a score of 24.4 today, which is just 0.1 behind his personal best at this level.

“Woody” is relatively green at the level, but shows a lot of promise. “It’s his third Prelim, so it will be a lot of course for him. I’m definitely going to have to ride. He’s pretty honest and wants to do the job, he just needs a little time to think about it. If I ride him well and give him a good set up, he’ll be good,” Erin said as she trekked around the Woodside cross country course.

“We purchased her in January from England and then Lauren got pregnant, so then all the sudden we were like, ‘oh I guess I’ll start riding her.’ She had ridden her at two or three shows and then I got to take her over,” Rebecca explained.

Tomorrow’s cross country will be an exciting challenge for this fresh pair as they become better acquainted. “It looks tough out there,” Rebecca said. “They’re using the coffin from the one-star. I’ve schooled her and I’ve jumped her, so I’m pretty confident. She’s a smart mare. I’m excited to see what she’s got.” 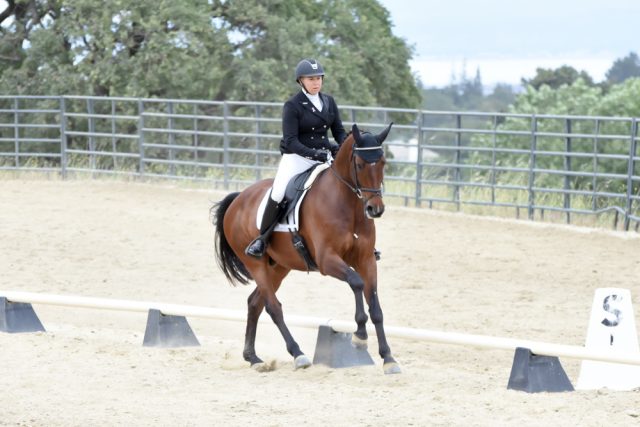 While the Preliminary Challenge sits in the spotlight this weekend, the Advanced division also completed the first phase of competition today.

In this group, Heather Morris and The Team Express Group’s Charlie Tango landed the leading position. The 9-year-old Irish Sport Horse  (Shannondale Sarco St. Ghyvan x Our Queen Bee) earned a 30 on the flat, which matches his score from his only other start at this level.

Alexis Helffrich and London Town, a 10-year-old Warmblood owned by Pamela Williams, scooted into second place on a score of 30.2.

James Alliston filled out third and fourth place with his own Parker and Mary McKee’s Happenstance, respectively. Tamra Smith and Judy McSwain’s Fleeceworks Royal are the final pair in the top five after earning a score of 33.7.

We head into a busy day of cross country and show jumping for the Preliminary Challenge competitors tomorrow, so stay tuned for an action-packed West Coast finale! 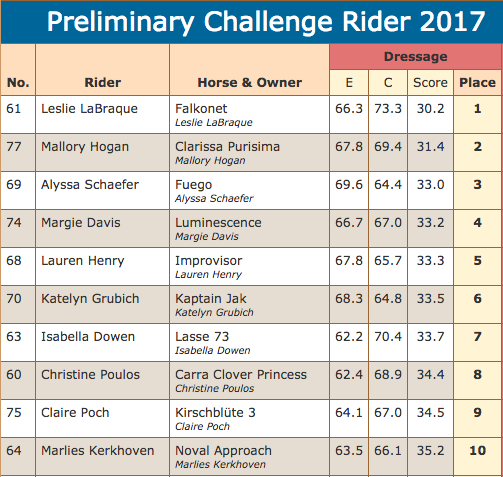 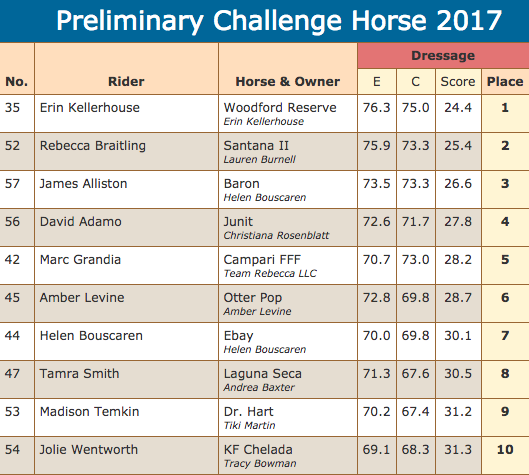 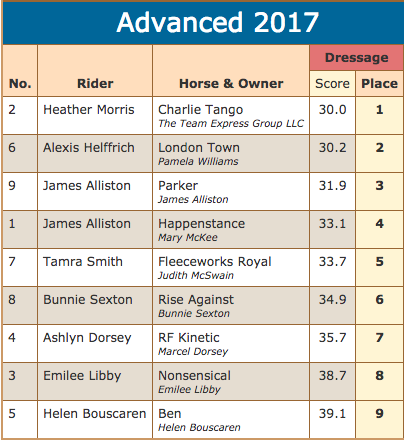