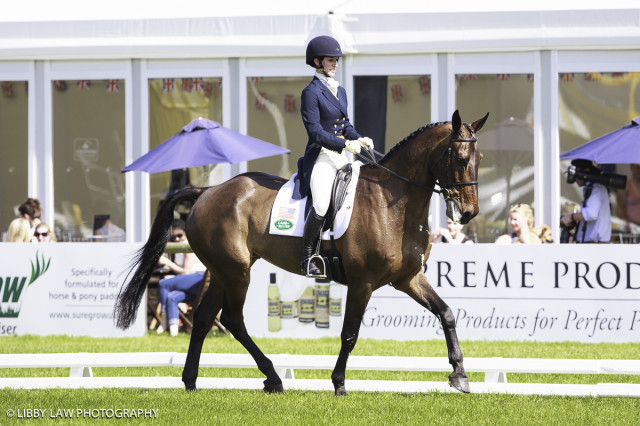 Jenny Caras and Fernhill Fortitude are leading the Bramham CCI3* Under 25 after the first day of dressage thanks to delivering a personal best score of 48.9 in their overseas debut. They traveled to Bramham as part of the Karen Stives Developing Rider Tour and are certainly making the most of the opportunity so far.

“There was more atmosphere than he’s ever seen, and he handled it amazingly,” Jenny said after the test. “He put in a really relaxed, workmanlike test, and the only major mistake was in the second change, which dropped the score a little bit. That was my fault.”

“Forty,” a 12-year-old Irish Sport Horse gelding Jenny owns, finished fifth in the Jersey Fresh CIC2* last month in their final preparation event for Bramham, and Jenny said he is feeling ready for the challenge.

“The course looks big and technical, and I don’t think it will be a dressage competition,” Jenny said. “I’ll spend most of tomorrow on the course working out the finer details.” You can click here to preview the CCI3* course courtesy of our friends at CrossCountry App.

Jenny said she’s grateful to have USEF Developing Coach Leslie Law with her in England and is also thankful for the funding from the  Karen Stives Developing Rider Tour, which is supported by a $1 million gift from Olympian Karen Stives. 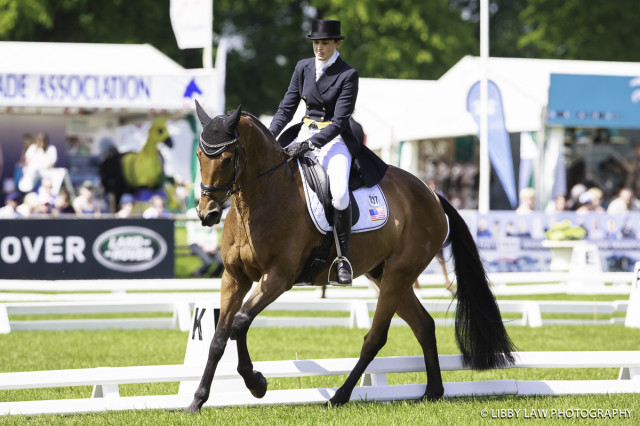 Katherine Coleman and Longwood also did their dressage today in the Senior CCI3*, scoring 53.9 to sit in 23rd after the first half of the division. That’s the 14-year-old Irish Sport Horse gelding’s best score on the flat since Red Hills CIC3* in March, when he scored a personal best 52.6.

Sammi Birch and Hunter Valley II are currently leading the CCI3* for Australia on 38.7, the only score in the 30s so far. That’s easily a personal best for Sammi and the 11-year-old British-bred gelding — a fantastic start as they hunt for redemption after parting ways on cross country at Tattersalls.

Clark Montgomery and Loughan Glen are our third American pair competing at Bramham this weekend, representing the U.S. in the Event Rider Masters CIC3* class as their final bid to make the Olympic team.

As the only pair in the field with an average finishing score in the 30s, EquiRatings has tapped Clark and Glen as the heavy favorites to take the win. Jess Montgomery checked in to say that all is going well so far — even the sun was shining today!

You can watch all the action from Event Rider Masters thanks to the fantastic free live stream on eventridermasters.tv. Dressage starts at 9:46 a.m. local time, 4:46 a.m. EST. Clark and Glen go at 4:22 local time, 11:22 a.m. EST. Click here for ride times. Go Eventing!