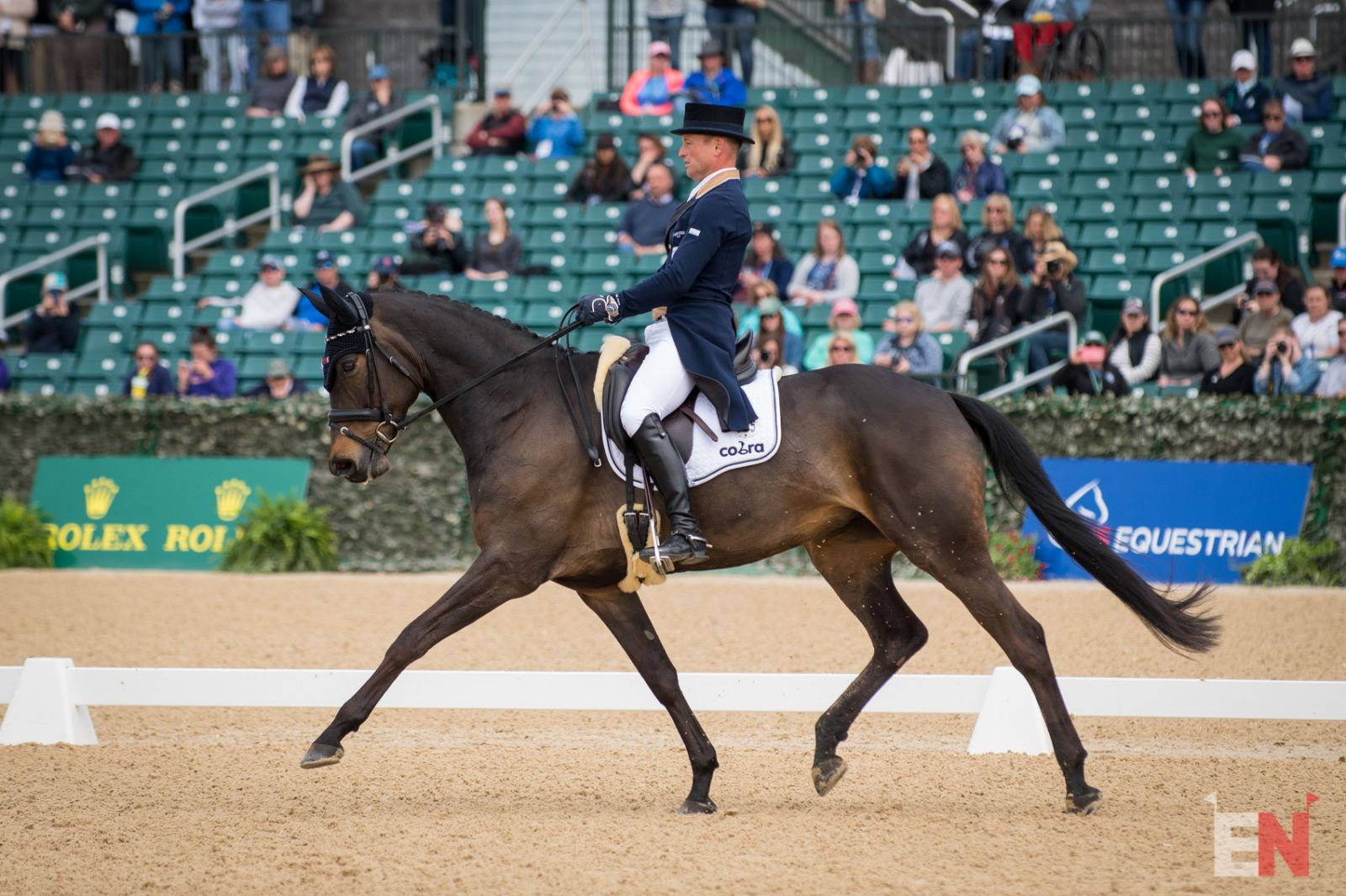 It’s go time, EN! The long anticipated 2018 Land Rover Kentucky Three-Day Event is officially upon us. We’re looking to the first day of dressage, where pairs will be shooting for excellence int he first phase. Don’t forget—we’ve also ditched the dressage multiplier, so we’re going to see the leaderboard get pretty tight. Click here to read more about what Equirating’s Diarm Byrne thinks that means for this year’s competition.

Buck Davidson and Carl & Cassie Segal’s Park Trader are first to go at 9:30 a.m. You can watch all the action live thanks to USEF Network. I’ll be updating this post throughout the morning, so keep checking back for all things #LRK3DE.

11:56 a.m. Michael, you’ve got some explaining to do according to the USEA’s CEO:

11:38 a.m. We’re on a lunch break now, dressage continues at 1:00 p.m. and we will start an afternoon open thread, so stay tuned for much more from Kentucky!

Michael Jung is unsurprisingly the first rider to break 70% from all three judges. However, 27.1 is Rocana’s worst 4* score since WEG in 2014. We have a competition, folks. #dressagedayone #LRK3DE

The second morning session scored +1.93 above their group expected average, with an overall +1.61 points for the morning from the ground jury of Christian Landolt, Sue Baxter, and Jane Hamlin. #dressagedayone #LRK3DE

And that’s three-time champions FischerRocana FST and Michael Jung into the lead on 27.1 right before the lunch break! #LRK3DE 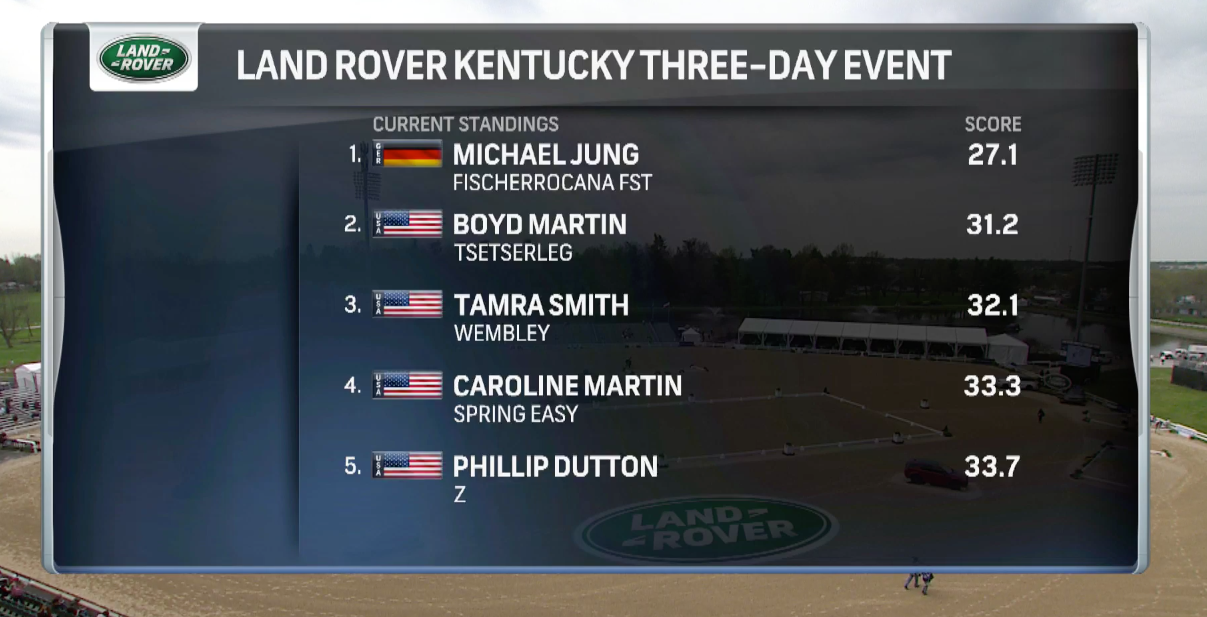 11:24 a.m. In the canterwork, they are trending 3 points higher than our leaders

11:19 a.m.  The reigning champions are in the ring! Now we hold our breath for what is assumed to be a spectacular test.

Only in eventing do competitors need crutches to get around on the ground but still compete in a 4*, and no one bats an eye. #LRK3DE

11:12 a.m. Colleen Loach and the flashy grey Qorry Blue D’Argouges make their way into the arena

Qorry Blue D’Argouges and Colleen Loach are sort of 4* rookies; they are one of 2 pairs to have competed at Rio but are attempting their first traditional 4*. Their Rio test (a shortened 4* test) scored 37.7 but their 3* PB is 29.8. #dressagedayone #LRK3DE

11:06 a.m. Woodge Fulton and Captain Jack are working through their test now. Liz Halliday-Sharp notes on the live stream that Woodge is the first rider not wearing spurs in her test.

11:04 a.m. A score of 32.1 moves Tamie and Wembley into second place! Great to see Tamie back here in Kentucky. Her last start was here in 2009 with Chaos Theory.

Tamie Smith receives the first mark to break 70%, with a 72.76% from Sue Baxter. @NLEventers #dressagedayone #LRK3DE

10:57 a.m. West Coast favorites Tamie Smith and Wembley are down the centerline

10:49 a.m. Ellen Doughty-Hume is in the ring with Sir Oberon. This week they celebrate their third 4* start as well as her fourth wedding anniversary! Ellen and her husband, Alistair, married here at the horse park in 2014.

The pairs in the first session scored +1.38 points above their expected group average. Sue Baxter was the highest scoring judge for 50% of the riders, while Jane Hamlin gave the lowest marks for four of the six pairs. #dressagedayone #LRK3DE

The judges differed in opinion most on Park Trader, with a delta of 5% between Christian Landolt (highest) and Jane Hamlin (lowest). No pair has broken the 70% mark with any judge yet; Tsetserleg comes the closest after receiving a 69.48% from Sue Baxter. #dressagedayone #LRK3DE 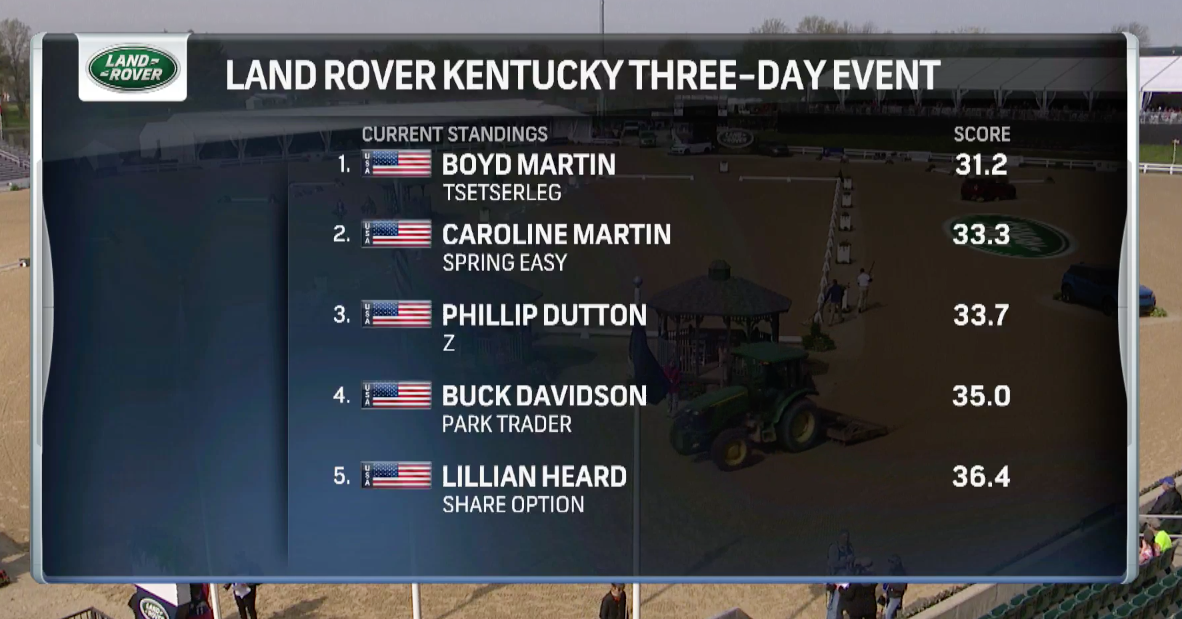 10:10 a.m. Boyd Martin and Tsetserleg have started with a very accurate test so far! Starting their season in Wellington is paying off.

Tsetserleg is the only horse in the field who made his first 3* in 2017 and is competing at his first 4* the following year. His personal best for the 3* level is 29.9. @WindurraUSA #dressagedayone #LRK3DE

Clip Clop clip-clopin’ away down centerline. Ready for xc and to gtfo of this arena #lrk3de

10:01 a.m. 36.4 for Lillian! The removal of the multiplier is definitely bunching these scores tightly.

10:00 a.m. Phillip sends a sweet shout out to Lee Lee in his post-ride interview! #LeeLeeStrong

9:58 a.m. “I’m impressed with how they are doing this” – Marilyn Payne on Lillian’s test

9:55 a.m. Lillian Heard and Share Option make their way into the ring.

9:54 a.m. 33.7 for Phillip and Z. Expert riding on a horse that started a little tense in his first four-star.

9:38 a.m. “It’s like sneaking vegetables into your kid’s diet” – John Kyle on why eventers must do dressage #relatable

9:37 a.m. Caroline Martin may need crutches on the ground, but she doesn’t look at all limited with Spring Easy in the dressage arena!

9:32 a.m. Marilyn Payne says new this year, riders half pass all the way across the ring to the quarter line, then do a flying change on the quarter line—a big straightens test. What a treat to have insights from a four-star judge on the live stream!

9:25 a.m. You’ll notice that the dressage arena is reversed this year, with the Judge at C now sitting with his back to the in gate.