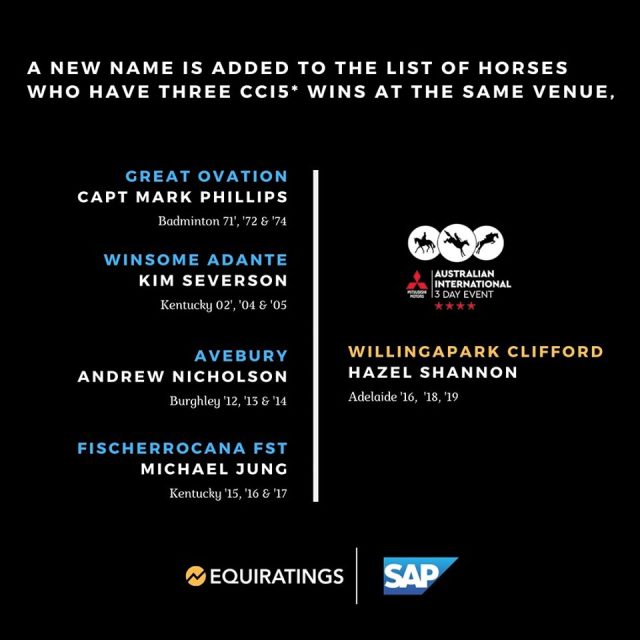 Over the weekend, a new name has been added to a prestigious list: that of horse and rider pairs who are three-time winners of the same CCI5*-L. Hazel Shannon and Willingapark Clifford cliched their third victory of the Australian International Three-Day Event. They’re the first pair to do so at that particular event and they’re amongst royal company of those who’ve ever managed the triple-winner feat.

Complete a survey, contribute to science! Jill Thomas, a Canadian Advanced-level eventer who is based in Virginia, is completing her MSc in Equine Science through the University of Edinburgh and undertaking a research project on the fitness programs of upper level eventers and how they correlate to injuries. She’s looking for people who have ridden at the Preliminary level or above to complete a survey. [Fitness regime management of upper level event horses and the incidence of distal limb injuries: A survey of upper level riders across the globe]

ICMYI, venues for the 2022 FEI World Championships were announced this weekend. The concept of hosting all disciples as at a single venue has been benched for this next iteration of the championships. Eventing and driving will be held at Pratoni del Vivaro in Italy. Jumping, dressage, para dressage, and vaulting will be held in Herning, Denmark. Venues for reining and endurance have yet to be voted on. [World Equestrian Games concept parked for 2022; several venues to be used]

How long have you been an eventing fan? Not as long as Lady Kingsley, who recently celebrated her 100th bithday! She’s seen the sport change and grow over the years, originally as a competitors, then as a breeder, and now and an owner and supporter. She has a great-grandson who is actively competing at three-star level and she regularly travels to spectate. [‘A wonderful owner’: eventing supporter still follows competition aged 100]

Monday Featured Video/ Photo Montage: Erin Sylvester and Campground nearly splashed down during their cross country round, but they saved it!

💦Save of the day alert 💦 “I almost fell off in the first water. I needed a re-group for the minute after that my tack was completely soaked. I felt like I was riding in the pouring rain and my foot was sliding out of my stirrup.” Erin Sylvester didn’t let a little water stop her from moving all the way up to third in the CCI4*-L 🙌🏻 @samanthalclark photos