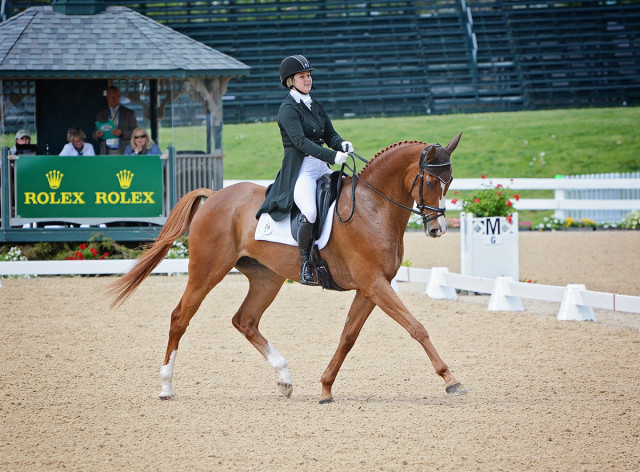 It’s finally here! I feel like a kid on Christmas (except without the presents, unless someone wants to bring me one from the Trade Fair…) today as we’re all set to begin dressage for the 2016 Rolex Kentucky Three-Day Event.

Will Faudree and Hans Dampf kicked things off at 8 a.m. with a beautiful test ride, and now we’re waiting with bated breath for our first riders down centerline this morning.

Keep an eye on this page throughout the morning for the latest updates. You can also follow along live on the USEF Network here. Many thanks to SmartPak for sponsoring our open threads this weekend — be sure to stop by and visit their tent in Sponsor Village!

Maya Black and Doesn’t Play Fair score 45.5 to slot into third place. They are one of our picks to finish at the top of the #RK3DE leaderboard!

12:04 p.m. EST: Katie Ruppel and Houdini score a 48.3 to go into a tie for fourth place with Tim Price and Bango. We go into the lunch break now and will resume at 1:30 p.m. EST. Last year’s winners, Michael Jung and fischerRocana FST will ride at 1:46 p.m.! We’ll start a new open thread for the afternoon, so stay tuned for the full report and much more. Live scores here.

Nilson Moreira da Silva has two of the best coaching him here at #rk3de: Mark Todd and Bruce Davidson!

12:01 p.m. EST: A very consistent test from Houdini so far. Just coming in for their changes to wrap things up. Gina says if she could be picky, she’d like to see more ground cover but overall this is a lovely test. And Katie is quite pleased! 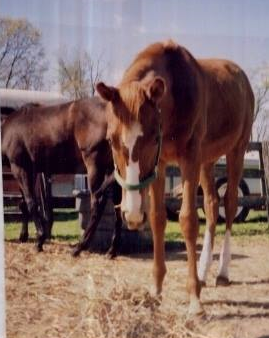 11:56 a.m. EST: A 45.4 for Maya and Doesn’t Play Fair, that slots them into third place. Just one more to go, Katie Ruppel and Houdini, before the lunch break. This is another horse who has really grown up on the flat, looking forward to this test.

11:54 a.m. EST: Just two small bobbles in her final changes, but Maya should be absolutely thrilled with this performance. Those changes might have been costly, but we’ll see.

11:53 a.m. EST: This horse looks so fun to jump. His hind end is ridiculous, imagine the power! Maya is having a really, really nice test.

11:51 a.m. EST: Good LAWD that extended trot. I’m really sorry that I can’t get good quality GIFs because that was a picture perfect moment. Wow.

11:48 a.m. EST: Maya Black and her pocket rocket, Doesn’t Play Fair are in the ring next. This pair has been on absolute fire this spring — can they peak here in Kentucky?

11:47 a.m. EST: Muggle jigs off from his halt after he hears the cheers. They’re all there for you, big guy! Well done.

Madison Park was thrilled with his dressage test! #rk3de pic.twitter.com/czaoCwdnPl

11:45 a.m. EST: A bit four-beat through the canter work for Muggle, but in his defense he has a lot of body to move around all pretty like. I give him props. 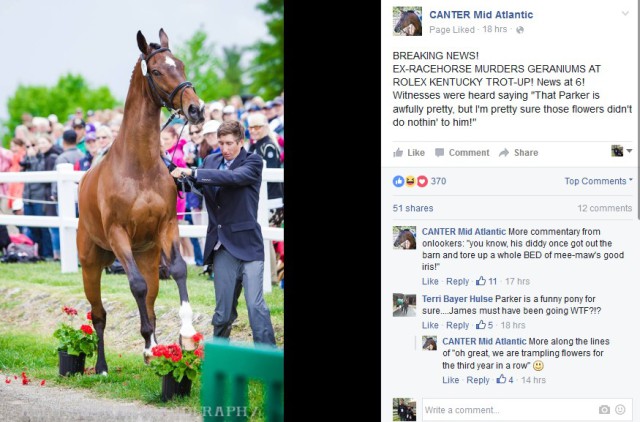 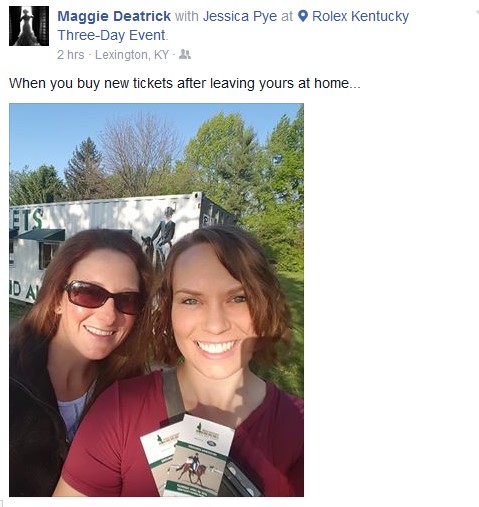 11:41 a.m. EST: And now in the ring are our third Rolex Rookie pair, Nilson Moreira da Silva and Muggle. Great name, the Harry Potter nerd in me strongly approves. 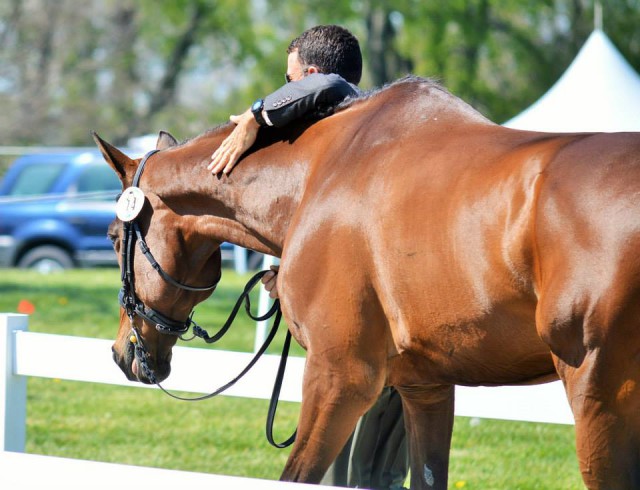 11:39 a.m. EST: Kyle shows Madison Park lots of love after his halt to big cheers from the gathered crowd. John Kyle says this pair was trending in the 60s throughout. Waiting for a score now.

11:37 a.m. EST: A little anticipation from Madison Park as Kyle takes his reins up from the extended walk.

11:30 a.m. EST: Ellen is the picture of poise as she comes into her final halt and gives Obie a big pat. A very nice looking test with just a couple of small mistakes.

11:27 a.m. EST: “Obie” looks relaxed in the big ring today. Gina Miles makes some shrewd observations about the gaits of horses, “You can improve the quality of the trot, but there’s not a lot you can do to improve the walk.”

11:22 a.m. EST: A funky change towards the end for Courtney and “Tag” but she’s nonetheless thrilled and gives him lots and lots of love. What a special feeling it has to be to bring a horse you bred to this level.

11:18 a.m. EST In the ring next are Courtney Cooper and Who’s A Star. This is a homebred for Courtney and Neal Cooper. Also, low key just spelled that “homebread” – I think I’m hungry.

11:18 a.m. EST: A BIG thank you to all of the loyal volunteers who keep these events running!

11:17 a.m. EST: “A Rolex completion is a big box to check.” – Gina Miles, who would definitely know. Girl has some major experience at this level.

Great Britain’s James Alliston and Parker score a 64.5 to kick off the final group before lunch at #rk3de #eventinglive

11:15 a.m. EST: The norms between U.S. and European eventing are strikingly different. To each their own!

11:11 a.m. EST: Great Britain’s James Alliston is in the ring now with Parker. This horse is such a consistent performer, he’s a joy to watch in all three phases – and even the jog! *wink face emoji*

11:04 a.m. EST: Samantha Clark is doing rider interviews throughout the day today. She catches up with Lillian Heard and Silva Martin here:

20-minute break. Next up is James Alliston and Parker, who was quite naughty at yesterday’s jog. #Rolex16 pic.twitter.com/9bydmnBX4U

10:44 a.m. EST: Tactical Maneuver scoots out of the ring after his halt, he’s ready to get on with it! “It was a game of tactics for Ashley,” John Kyle says of a sensible and tactful ride from a very poised Rookie.

10:43 a.m. EST: When you do an Instagram search for #ROLEX and this is what pops up. Thanks for reminding us that we’re poor, IG. 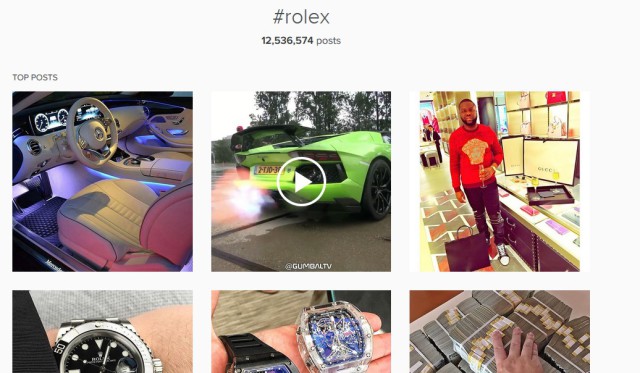 10:41 a.m. EST: Tactical Maneuver’s barn name is Gucci. I love it. I can’t. Someone get this horse a Gucci browband, stat! This pair is working with a bit of tension, especially with his changes, but he’s keeping a lid on.

Kicking off our daily #rk3de Instagram Challenge! We’ll be bringing you an opportunity for a great prize each day this week. Today’s challenge: snap a photo at the #dressage warm-up. Use hashtag #RK3DEGameFace and tag @totalsaddlefit to be eligible for drawing to win. We’ll announce winners here each morning. Good luck! #rolex #rolexkentucky #sponsored #contest #eventersofinstagram

10:39 a.m. EST: Katherine Coleman and Courage Under Fire score a 66.9 in their four-star debut. Next in, another Rookie pair, Ashley Johnson and Tactical Maneuver.

Katherine, an American now based in England full-time, brought Meg back to the States to compete in their first 4*. #Rolex16

10:22 a.m. EST: We’ll see Colleen Rutledge on her sole entry next, Escot 6. Sadly, she had to withdraw heavy favorite Covert Rights this week. This is Escot 6’s first four-star.

Mackenna Shea and Landioso earn a 50.3 in their second #rk3de start. That’s good for sixth at the moment. #eventinglive

10:19 a.m. EST: Chinch has been kidnapped! Though we heard a rumor he’s going to go meet American Pharoah on his escapade, so I guess we can’t be that mad.

We’ve kidnapped @eventingnation Chinch! Check out our snapchat and Instagram and stop by our stand @RolexKentucky pic.twitter.com/Dd3XKncwnq

10:13 a.m. EST: Next up, Mackenna Shea and Landioso, the first West Coast pair to see today. Landi is a lovely mover, so this should be a treat.

Caption this photo of Bango! “Is all that applause for me?” #rk3de

10:11 a.m. EST: Novelle is another who will be ready to get on to cross country, but Angela put in a very tactful ride with some great changes!

Watching #rk3de at work? @firefox has a nifty add-on called “Always On Top” so you can keep #livestream on top of yr spreadsheet or whatev.

10:03 a.m. EST: Liz Halliday-Sharp tells Frankie Thieriot that she’s thrilled with “Blackie” and that he can actually be a bit lazy for a four-star horse.

10:02 a.m. EST: Nice changes from Bango for Tim. A tad hurried in the left to right, but they’ve nailed the halt and Tim has his game face on. Will Bango step up to stablemate’s Wesko’s shoes this weekend?

Landmark’s Monte Carlo looked very proud of himself after his test with Lauren Kieffer. This is Patrick’s four-star debut! #rk3de

10:00 a.m. EST: Tim Price is the first to see with a top hat on, if I’ve been paying attention correctly. Which is questionable. I should probably go get more coffee.

New Zealand’s Tim Price is in the ring now with his sole ride for the weekend, Bango, a 16.3h 10yo ISH gelding #Rolex16

9:58 a.m. EST: And we have a new leader! Liz Halliday-Sharp and Fernhill By Night earn a 43 from the judges. Next in, New Zealand’s Tim Price and Bango. This horse is LOVELY.

9:52 a.m EST: Gina Miles just compared dressage to yoga. No wonder I’m not any good at it. #whatsatreepose

9:49 a.m. EST: And we’re back underway with Liz Halliday-Sharp and Fernhill By Night. These two know how to throw down in the sandbox.

Behind every champion…@laurenkieffer has Mama and Papa Kieffs supporting her in style this w/e #thebest pic.twitter.com/V8ZuixMtr3

9:32 a.m. EST: And we’re into our first break of the day, just a few minutes kicking back off at 9:50 with Liz Halliday-Sharp and Fernhill By Night. Phillip and Fernhill Fugitive lead at the moment on their trailblazing score of 43.1.

9:30 a.m. EST: Lauren looks pleased with “Patrick” after his debut test. One bobble in the canterwork but otherwise a great test.

9:27 a.m. EST: Landmark’s Monte Carlo doing a great job for Lauren Kieffer in his CCI4* debut. John Kyle has just reminded us that this horse made a trip to Europe last year with Lauren, so he’s seen some atmosphere in his time.

9:25 a.m. EST: Fun fact, this is the first time siblings Doug Payne and Holly Payne Caravella are competing at Rolex at the same time since 2012. Keepin’ it in the fam! #eventingfam Ok I’m done. I shouldn’t be in charge of hashtags. Ever.

9:23 a.m. EST: Just one more to see before our first break of the day, Lauren Kieffer and Landmark’s Monte Carlo.

9:20 a.m. EST: Holly Payne will be happy to get this test done, Never OutFoxed is READY for cross country. “Dressage is stupid, mom.”

The babies are out in full force today! Aubrey Davidson proudly wears red and yellow to cheer on her dad! #rk3de pic.twitter.com/FGJbdbKEoX

9:14 a.m. EST: One clean change, one late behind change for Frankie’s first four-star test. Aussie Aussie Aussie! (Come on, Dom, I know you’re out there somewhere chiming in.)

9:13 a.m. EST: Ryan Wood is making his return to the CCI4* level after several years away, and he’s off to a great start with Frankie.

So far Phillip Dutton and Fernhill Fugitive are still leading with 43.2. #Rolex16 pic.twitter.com/FhZAyYoUOI

Lillian is “just one of those wonderfully magnetic personalities that you want to be around,” according to announcer Karen O’Connor.

8:48 a.m. EST: Boyd Martin is nursing Steady Eddie through his four-star debut, the first of his three rides this weekend. They’ll finish their day early on a score of 57.1. 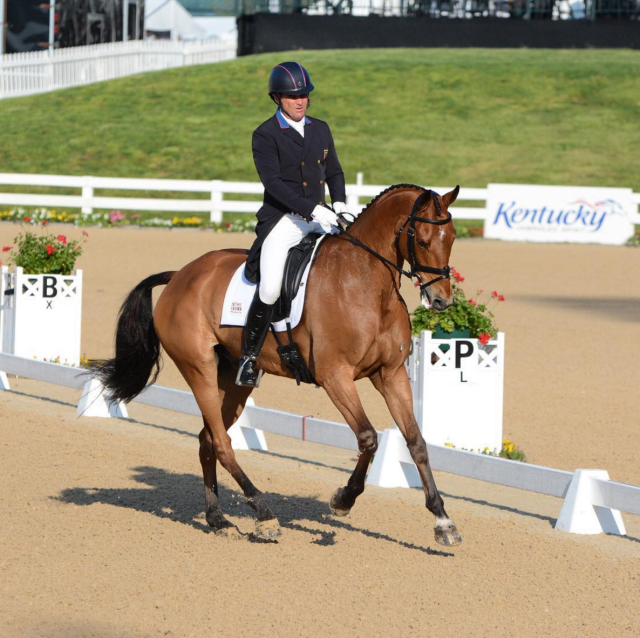 Day 1 dressage trailblazers Phillip Dutton and Fernhill Fugitive lead off with a score of 43.1. Photo by Jenni Autry.

8:31 a.m. EST: Fernhill Fugitive is in the ring and looking every bit of a trailblazer so far.

First to compete in dressage at Rolex Kentucky 2016 is Phillip Dutton and Fernhill Fugitive, 11yo 16.3 ISH gelding. pic.twitter.com/HeXxiSW4Gi

8:43 a.m. EST: Buck Davidson gives Park Trader some big pats and hands out some high-fives on his way out of the stadium. A score of 49.6 for this pair.