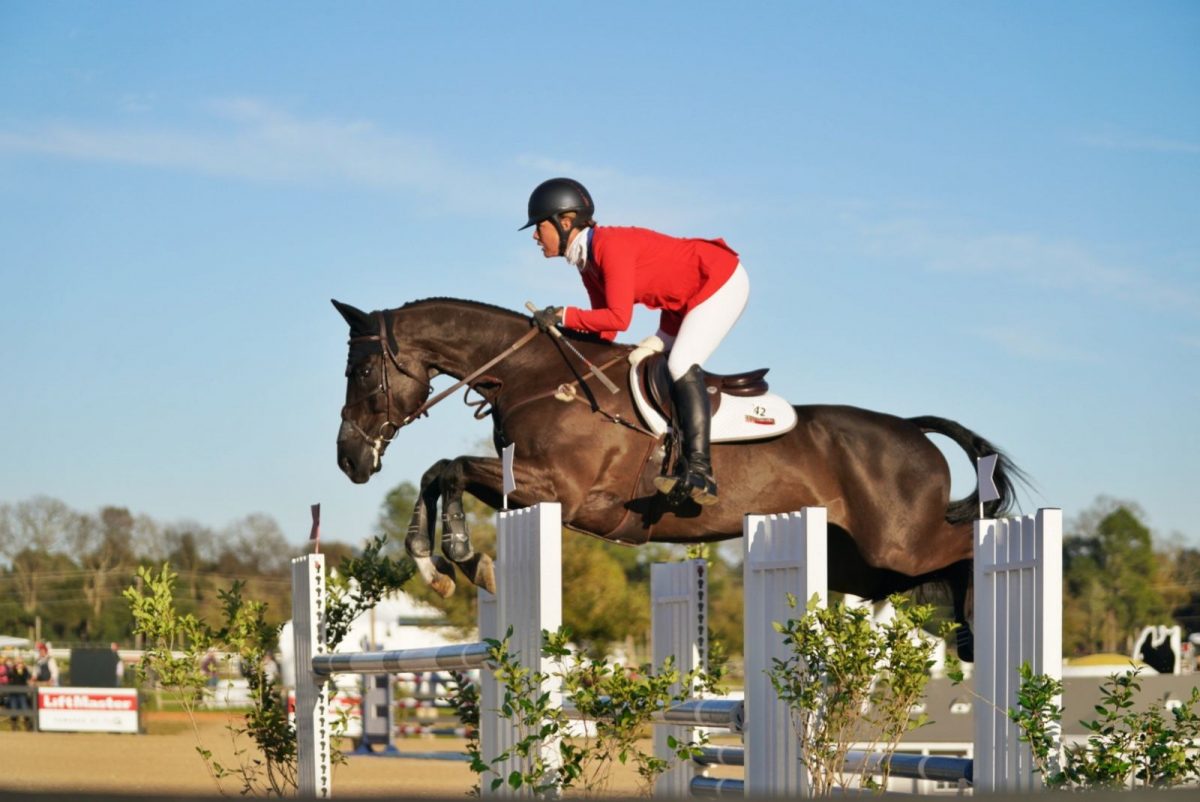 It was a bit of feast or famine during the show jumping phase that wrapped up the first day of competition at the $50,000 Liftmaster Grand Prix Eventing at Bruce’s Field in Aiken, Sc. The show jumping phase, sponsored by Jack Wetzel, featured a tricky track and plenty of shadows cast by the setting sun to catch out more than a few riders. Michel Vaillancourt’s track here at the Grand Prix is notoriously tough and saw only five combinations jump clear inside the time in 2020; this year’s iteration shows an improvement in clear rounds with 14 riders managing double clear rounds today. 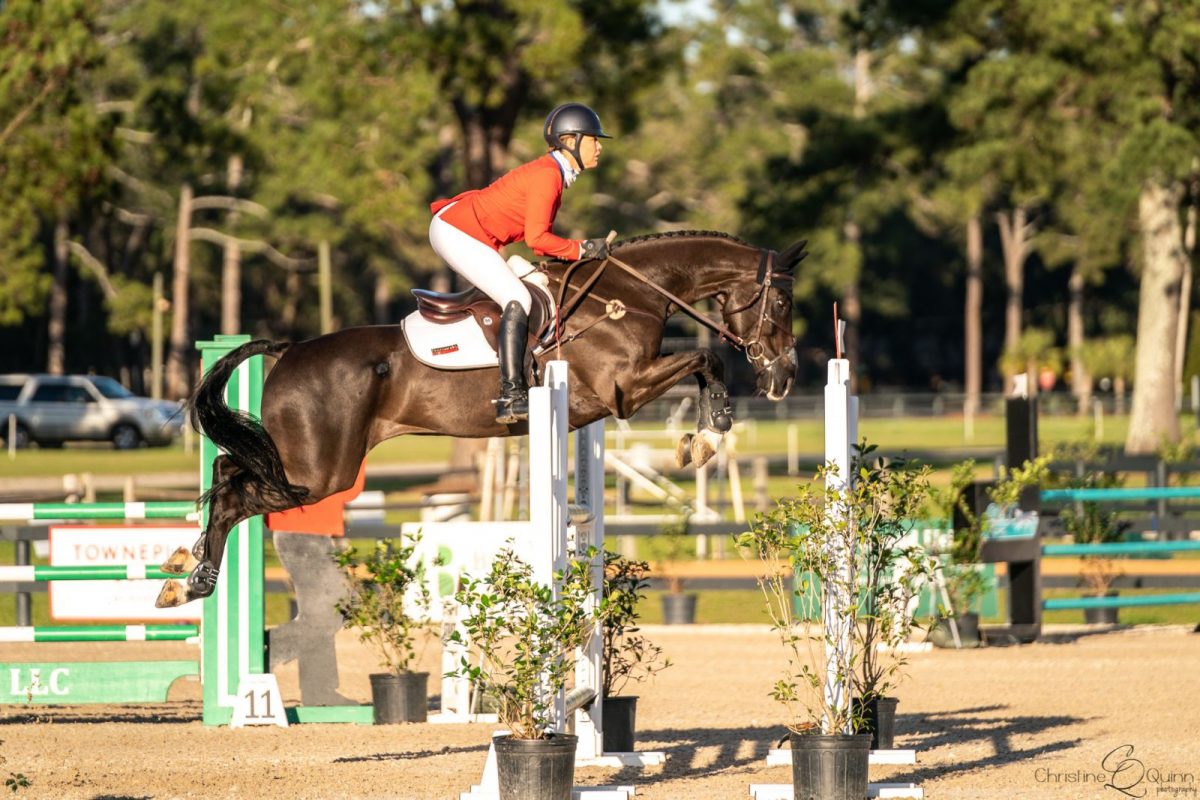 Tamie Smith and Mai Baum (23.3) (owned by the Ahearn family and Eric Markell) will hold onto their lead on the wings of a double clear round this afternoon as the final pair in the ring. As the sun set, looming shadows made for increasingly spooky horses and fumbled distances, but Tamie sat cool as a cucumber and let “Lexus” do his thing as he “pinged around” to make light work of the course. “As long as I don’t mess up, he’s pretty amazing!” she told Frankie Thieriot after her ride. Tamie’s second ride, Ruth Bley’s Danito, lowered one rail and picked up a second of time to drop down to sixth overnight on a score of 29.2, but the California-based rider said she’s proud of both horses for their efforts today.

Liz Halliday-Sharp kept the pressure up on her quest to turn in a hat trick of wins at the third Eventing Grand Prix (she won here in 2019 aboard Fernhill By night and in 2020 with Deniro Z), moving into second and third with Deniro Z (25.8) and Fernhill By Night (26.4), respectively, thanks to clear rounds. Fernhill By Night came home one second over the time allowed – “I maybe just chickened out and helped him a little too much in some spots,” she reflected – but both horses are in striking distance as we look ahead to Capt. Mark Phillip’s cross country test tomorrow. Liz also brings her third ride, Cooley Quicksilver, into the top 10 overnight in eighth place on a score of 30.0. 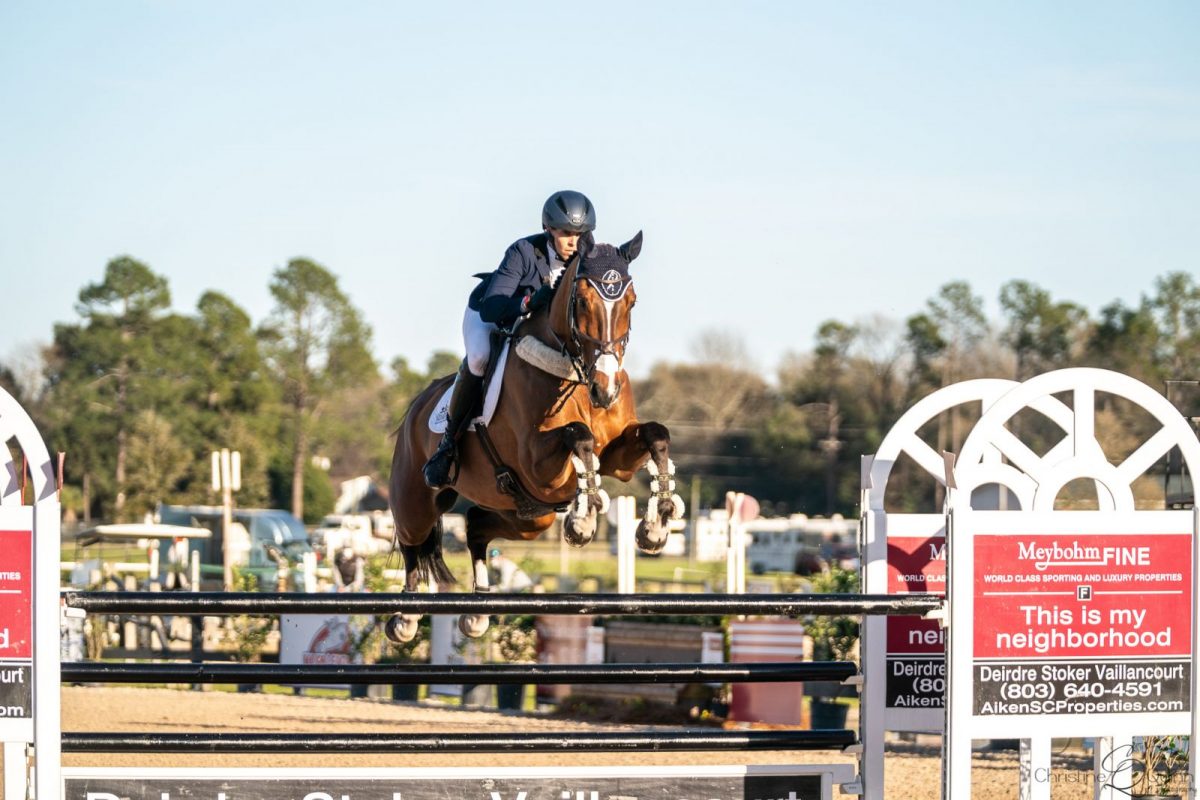 Looking to tomorrow for Liz, it should come as no surprise that she’s here to win. “I’m obviously going to go for it on all three of my horses, I think that’s the best way to do it,” she said. “It looks like an awesome course; it’s great that we get to use some of the [steeplechase] race course this time and I think that’s going to open things up a lot.”

Boyd Martin didn’t have his best day with Christine Turner’s Tsetserleg, who lowered three rails and collected two seconds of time to drop out of the top 20 after two phases on a score of 40.6. He is, however, still well in contention for a strong finish as he moves up into a tie for fourth place with Long Island T and Luke 140, both on a score of 28.3. 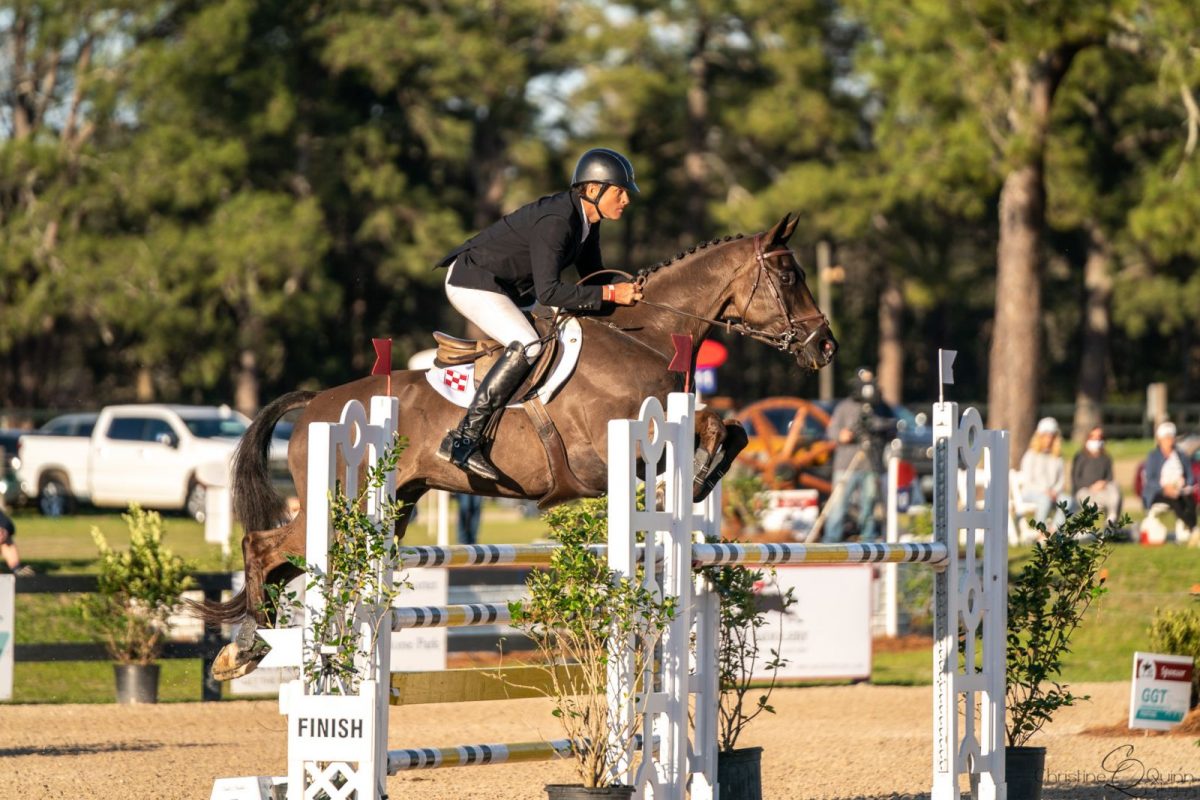 Sara Kozumplik Murphy and Rubens d’Ysieux had perhaps the loveliest round of the bunch, a forward and bold ride that moved the pair up into seventh on a two-phase score of 29.7. This pair has a good track record in the show jumping, which paid off over a track that was causing issues left and right.

Completing the top 10 in a tie at 30.6 are Clayton Fredericks with FE Always In Time and Buck Davidson with Erroll Gobey (owned by Cassie Segal, Lisa Darden, and Natalie Sandler). Doug Payne also has his three rides within 10 penalties or less of the leader, with Quantum Leap the highest placed in 11th on a score of 30.7.

Our biggest mover of the show jumping was Lillian Heard, who moved up from 26th into 13th aboard the well-seasoned LCC Barnaby, who will no doubt be a treat to watch in tomorrow’s cross country finale. Lillian said she felt “Barnaby” make a stronger effort as the course progressed, and they’ll take a score of 33.1 into tomorrow.

In total, Michel Vaillancourt’s track saw a 39% double clear rate. 50% of the completed rounds were done so without jumping penalties. One pair, Nilson Da Silva and Magnum’s Martini, elected to retire on course. Five pairs have been withdrawn ahead of tomorrow’s cross country: Phillip Dutton and Sea of Clouds, Mike Pendleton and Steady Eddie, Waylon Roberts and Lancaster, Jenny Caras and Trendy Fernhill, and Allison Springer and Business Ben.

Cross country action kicks off at 2:30 p.m. EST tomorrow and will be streamed live exclusively on Horse & Country TV. I’m looking forward to my first open live update thread of the new season, so be sure to follow along right here on EN for the latest updates. Many, many thanks to the team on the ground at Bruce’s Field, including Aiken Horse Park Foundation Director of Marketing Kate Boggan, photographer Christine Quinn, and Athletux’s Frankie Thieriot Stutes for their assistance in making this remote coverage possible!

Take a look at what riders will be tackling thanks to CrossCountryApp:

Last but most certainly not least, don’t forget to cast your votes in the Ride for Charity Challenge happening in conjunction with the Grand Prix Eventing this weekend. Click here and scroll to the bottom of the page for more information. 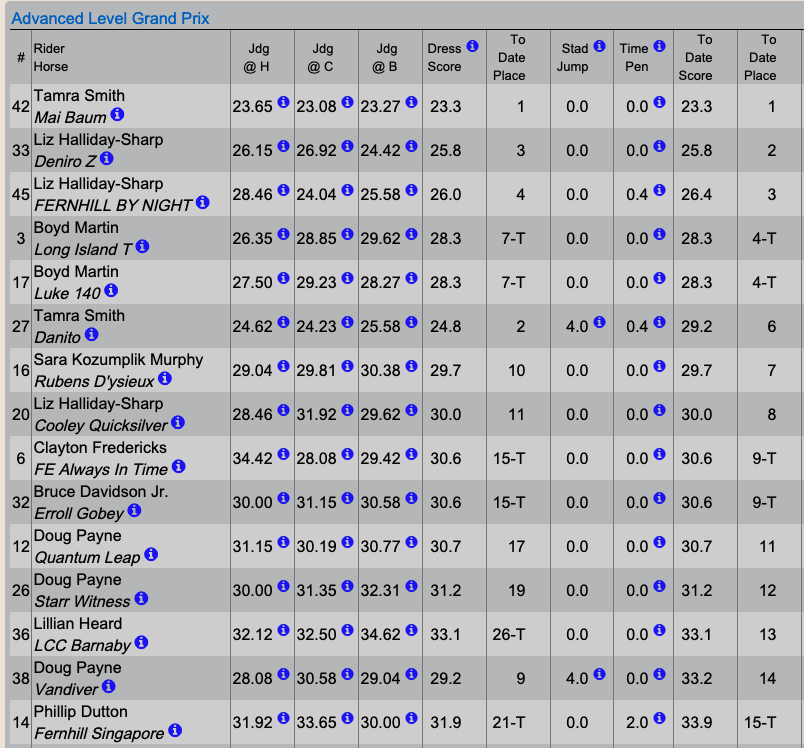