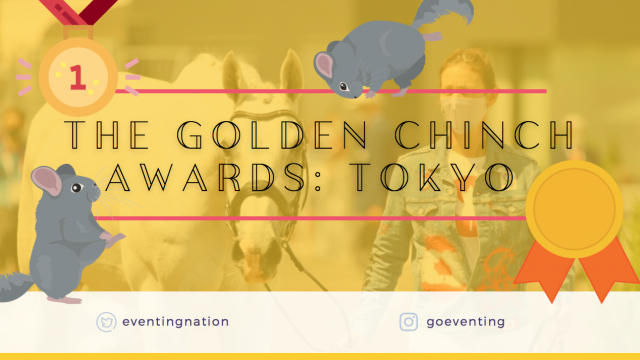 Travelling to the other end of the world, navigating tough training programmes and navigating ever-changing competition schedules in a pandemic, and being resolute enough to cope with an Olympics sans crowds is all very admirable – but it doesn’t exempt you from being lovingly lampooned in this, the Tokyo edition of our highly-coveted Golden Chinch Awards. Winning Badminton or Burghley (remember those? Okay grandma), Kentucky (Land Rover? Rolex? Just remind me that I’m broke, why don’t ya), or a championship title is all well and good, but everyone knows that all the pros are in the game for one reason: to fight for the honour of having a truly ludicrous jog award bestowed upon them by me, a journalist about to embark upon her third consecutive all-nighter in a t-shirt that’s covered in coffee stains. You think you know FASHION? Move aside, chaps, because it’s time for the Anna Wintour of equestrian media to take the floor.

Awarding the Golden Chinches at an Olympics is a unique experience: whereas riders at five-stars are free to make their own bad decisions (or to let their managers and PRs make them for them), Olympic attire is governed by the higher-ups. Whether it’s the national equestrian federation that decides the outfits, or the country’s Olympic committee, each member of the team is stuck with whatever’s been pulled out of the wardrobe and thrust in their general direction. Sometimes this works well for them. Sometimes you end up dressed like a deceased royal.

And so, without further ado, let’s dive into Tokyo Fashion Week: where the colour schemes were questionable and the shorts were, well…you’ll see.

The Golden Chinch for the Outfit Most Likely to Have Been Picked Up at a Market Stall: 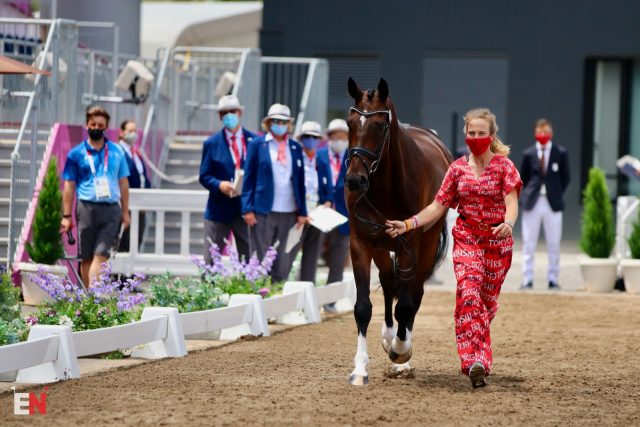 Londoners will feel this one in their soul: you’re fifteen years old, with a bit too much eyeliner on and a slathering of Dream Matte Mousse that would suit Charlotte Dujardin’s Gio, but not you. You’re feeling extra grown up because you’ve been allowed to jump on the train into town by yourself to blow your money from your weekend babysitting job and furtively share a cigarette with eight of your closest pals. You’re feeling cooler than you’ve ever felt, and so your first port of call is Camden Market, where you’ve got your sights set on some bold, statement pieces. After sifting through some bootleg band t-shirts (The Roling Stones? Nervana? Lawsuit-proof, baby), you find it: a striking jumpsuit that makes you look like you’re working on the children’s ward at 3 but you’ve got a rap-battle lined up at 6. “For you, young miss, I do £10,” says the stallholder. Sold.

(NB: Props to Lara, mind you, for avoiding the orange foundation and heavy eyeliner look. You’ve pulled this off in a way that no one else can, and in the interest of not losing my job, I must acknowledge the fact that this was editor Sally Spickard’s favourite outfit of the day.)

The Golden Chinch Award for the Rider Most Likely to Go to Space with Jeff Bezos: 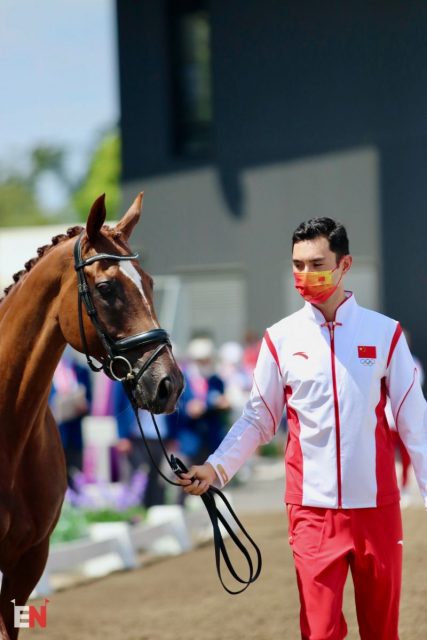 Look at him! He’s got his little space suit ready! Now all he needs is some billionaire to fork over $28 million for the trip and then realise he’s got a haircut booked that day. When that happens, Alex is ready and waiting to take his place. Alex, pal, while you’re up there, can you ask Jeff to put Game of Thrones on Prime Video? 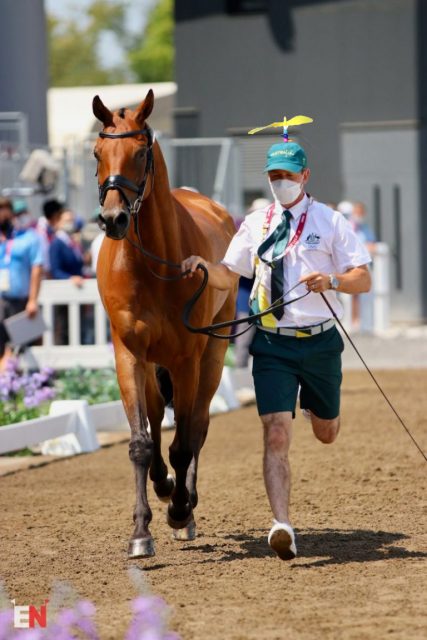 Fixed it for ya, lads.

The Golden Chinch for Mastery of the People’s Princess to Revenge Outfit Pipeline: 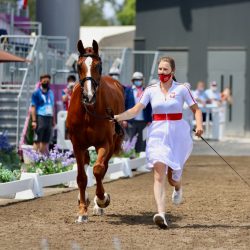 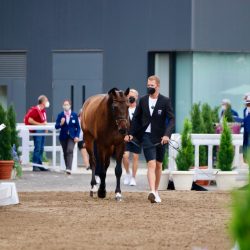 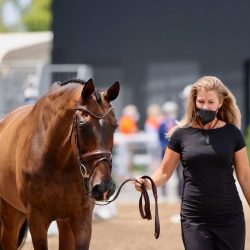 “There were three of us in this Golden Chinch award, so it was a bit crowded.”

It’s rare that we award a Golden Chinch to a group, rather than an individual – but consider this the ‘Best Picture’ of this year’s awards. It’s a collaborative effort that is worth more than the sum of its parts, and we must commend everyone’s extraordinary work in pulling it off. It’s the nod to the Princess of Wales that we probably could have used at London 2012, but we’ll accept it nearly a decade later, because she’s still the Princess of our Hearts, or something.

Much has been written in the mainstream media about the timeline of Diana’s wardrobe: from fresh-faced, doe-eyed little Lady, to ’90s doyenne of athleisure, to jilted woman who sought revenge with sexy outfits, every bit of it has been ripe for analysis. And so we saw it played out on the jog strip today: we’ve got Malgorzata Cybulska of Poland in the prim and pretty dress, representing Lady Di at the moment when an interviewer asked her and Charles if they were in love and he replied, “whatever love is.” Ouch. Then we’ve got a whole host of knobbly-kneed boys in peak trendy Diana mode: this is Di as a young mum, striding through town in cycling shorts and oversized sweatshirts, gleaming white trainers stuck to the end of toned, tanned legs. Some days she added a cap, some days she added shades, and notably, she would sometimes chuck a structured, oversized blazer over the whole thing, as Jesse Campbell did this morning. It’s a look that screams “I know about the tampon phone call, and I’m rising above it”, and we are here for it. Finally, in the role of Revenge Di, Jonelle Price dons a spicy little black number that’s just begging for a dance with John Travolta.

The Golden Chinch for the Best F.R.I.E.N.D.S. Reference: 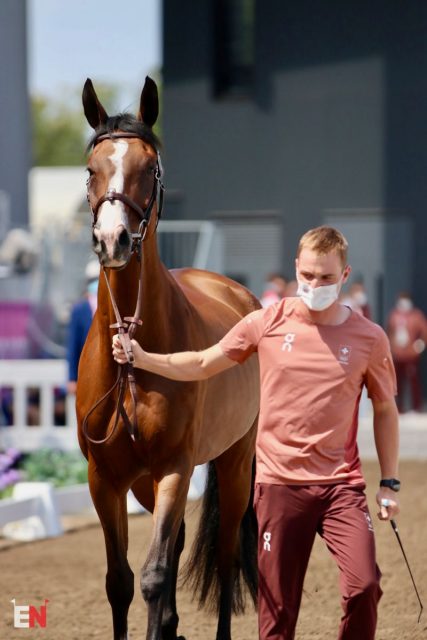 The Golden Chinch Award for Looking Like a Dating App Red Flag: 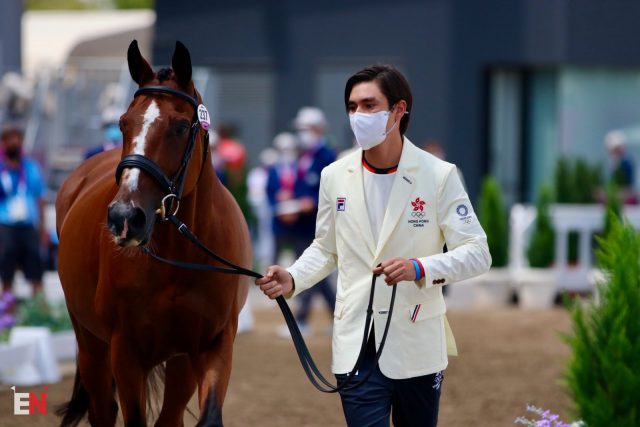 Tom is a lovely chap, so let’s get that out of the way first of all. Absolutely delightful. Not at all into causing harm and heartbreak on the world wide web. But the very fitted trousers? The slimline (white!) blazer? The carefully-honed, boyband hair situation? This is a look that you’d swipe right for, even though you’d do it with a sigh because you’d know, deep down, that this man would reel you in like a helpless little fishy, wooing your defences away by making you playlists full of Sufjan Stevens and Phoebe Bridgers, texting you terribly clever lines from the book he’s reading (“just made me think of you x”), and making intense and compelling eye contact while he asked you lots of questions about your childhood, before ultimately ghosting you one day and unmatching you on Tinder. Every. Damn. Time. Just go for the guy with the sedated tiger photo and keep the bar really low next time.

(Tom is engaged, so we’re confident this isn’t his actual method. But man, did he dress like it today.)

The Golden Chinch for the Team Most Likely to Sell You Thin Mints: 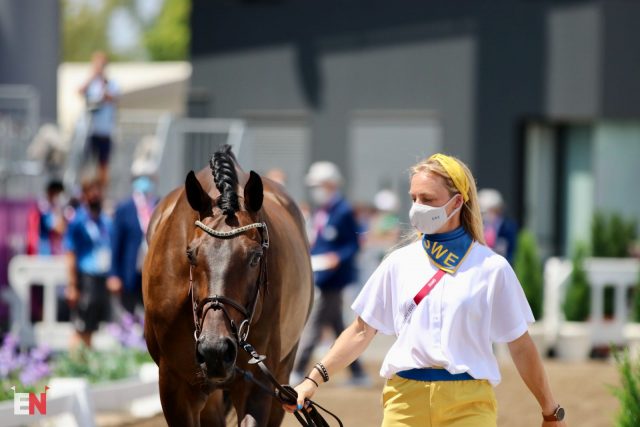 Winner: the ladies of Team Sweden

“They’re only $5 a box and 76% of your purchase will go towards building girls of courage, confidence, and character,” says Sara Algotsson Ostholt, her little foot stubbornly stuck in the door jamb to stop you from shutting her out of your house. She’s only small, and she’s laden down with what looks like hundreds of boxes of cookies, but there’s something frightening in her unblinking eye contact and wide smile. Underneath her natty neckerchief, you can see hundreds of achievement badges dotting her shirt. You’re not sure what any of them mean, but you think you spot one that has what looks like a dagger on it. A sweat forming across your back, you opt to buy ten boxes to try to assuage the tiny assassin and her murderous, unseen overlords.

“Thank you for feeding joy today,” she says – and that’s the last thing you ever hear.

The Golden Chinch for the Rider Most Likely to Get Arrested for Stealing a Ribena From a Corner Store: 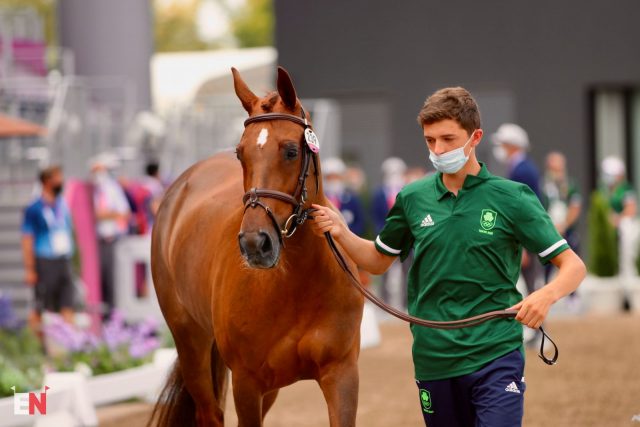 My gym is in a vaguely dodgy bit of town, and every time I go, I inevitably drive past a group of guys punching each other’s lights out in front of the Job Centre. They’re always dressed exactly like the Irish team, though I’ve never yet seen any of them bring a horse to the fight. (Mind you, if you were going to bring one, diminutive and feisty Rioghan Rua would be my choice – I’ve seen those hind legs in action, and they’re both fast and accurate.) Cathal’s look here tells me that this is a man who ‘loves the sesh’, ‘lives for the bants’, and ‘will dwell in his mum’s basement until he’s 45’.

The Golden Chinch for the Who Dat? Hottie of the Day 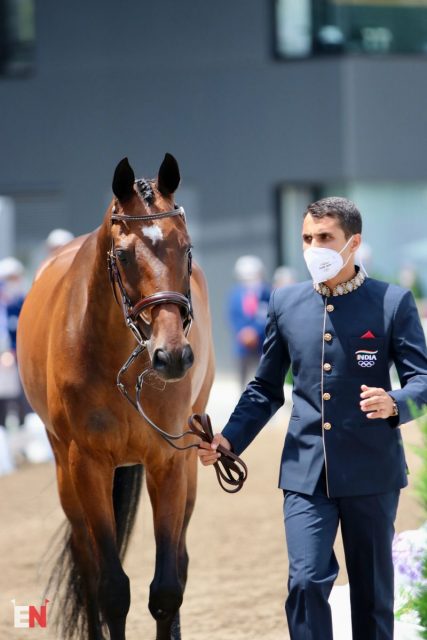 My first thought when I saw this photo was ‘wow, this is giving me Viktor Krum at the Yule Ball vibes.’ My second thought was ‘oh my god, I’m thirty years old and dangerously close to assigning this Olympian a Hogwarts house on the internet. This is why I’m single.‘ So instead, I’m going to be really civilised, really responsible, and really professional, and give Fouaad the inaugural ‘Who Dat? Hottie’ prize for somehow managing to smoulder even while wearing a face mask. The thirst is real, and not just because it’s 90 degrees out there. 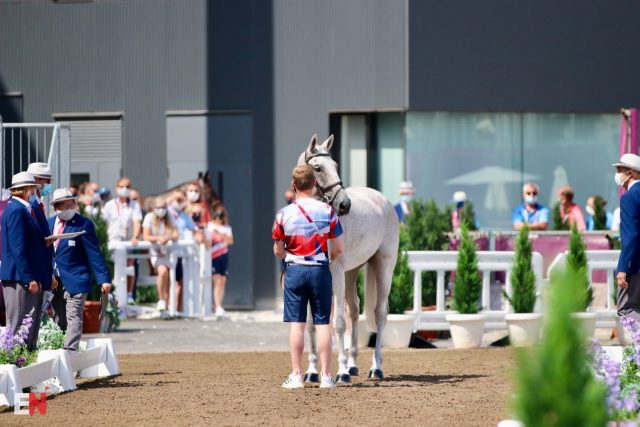 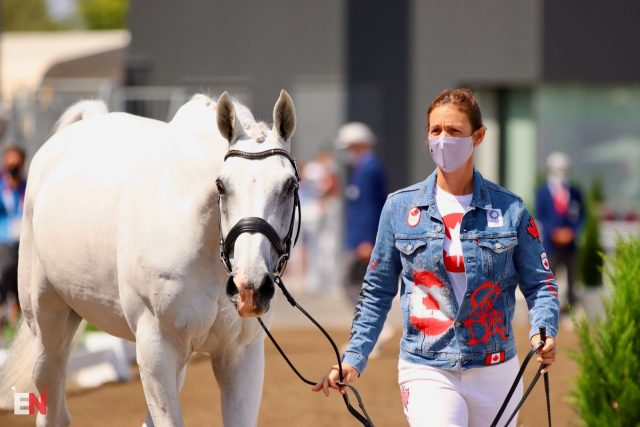 The real irony of this outfit, though, is that she couldn’t find any blue jeans to complete the Canadian tuxedo. 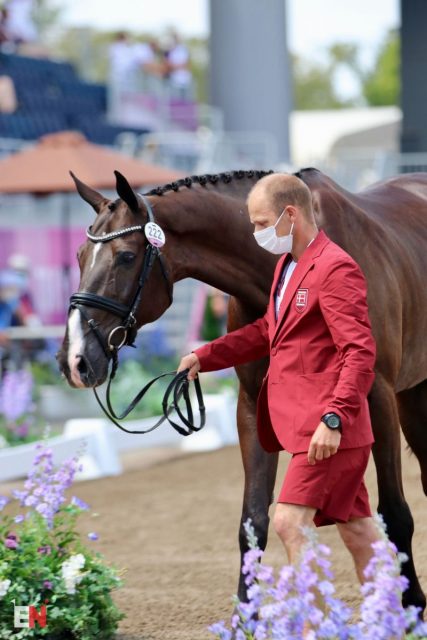 This is the Pandemic Olympics, and this is a rider who’s summed up the vibe of the last 18 months so wholly and conclusively that it almost brought a little tear to my eye. Who among us hasn’t woken up three minutes before an important Zoom call, rubbed the sleep out of their eyes, and chucked a blazer on over their undergarments to transform into a boss business babe? Peter could have been a mere footnote here, an honourable mention in the Princess Di pipeline, but the addition of that jazzy red and some shorts that really are short has launched this look onto its own podium. It’s business up top, party down below, and it’s taken WFH and made it couture. Timely, topical, and tailored. The grand champion.

Congratulations to all our lucky winners! Please still grant me interviews when I next see you all.

Want to stay in the know with all things Olympic eventing? We’ve officially kicked off daily editions of our Olympic Digest. You can sign up for free right here.