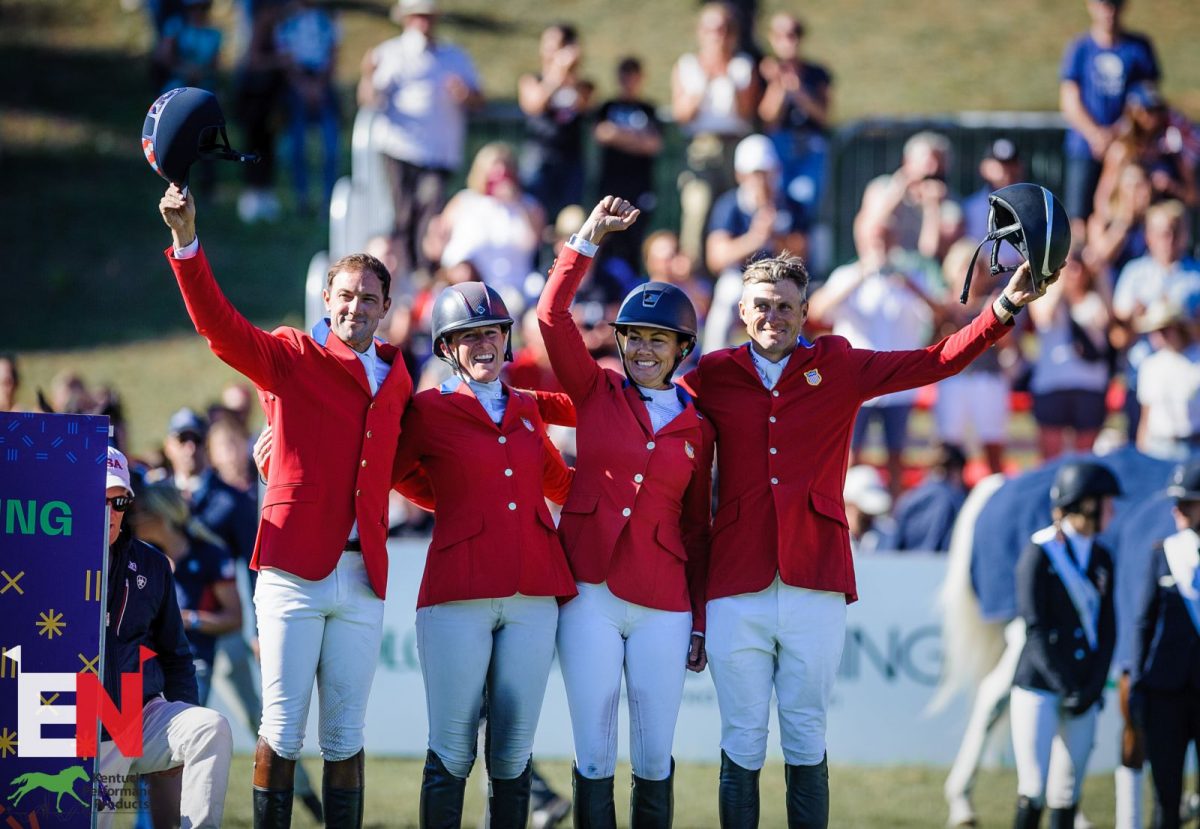 Before this month, 2006 was the most recent year that the U.S. had secured a medal in World Equestrian Games/World Championship competition. This honor was earned by the late and great Amy Tryon with Poggio II at the Games in Aachen, Germany. To find the last team medal won by the Amercians, you must flip back to the 2002 World Equestrian Games in Jerez, Spain, when the stalwart team of David O’Connor (Giltedge), Kim Severson (Winsome Adante), Amy Tryon (Poggio II), and John Williams (Carrick) pulled off a nail-biter of a finish to secure team gold. A smattering of Olympic and Pan American medals can be found in the recent records, but the pinnacle of achievement — the team gold — is an elusive prize.

It’s nearly impossible to pinpoint any absence of podium finishes to one root cause — and the truth is, each U.S. equestrian team has gone through its shares of ups and downs in recent cycles. The American eventers and para dressage riders, for example, were the only U.S. representatives to come out of this year’s FEI World Championships with a medal.

Nonetheless, a World Championships podium “drought” makes the fact that the U.S. collected a hard-fought team silver at Pratoni even sweeter.

No one was exactly sure what to expect of this team six months ago. US Equestrian leadership was dismantled at the end of 2021 with the non-renewal of contracts for former Director of High Performance Eventing Erik Duvander and Managing Director of Eventing Jenni Autry. It was then reassembled with the naming of interim chef d’equipe Bobby Costello, who took the reins in a mostly unprecedented management – rather than “coaching” – role. It was a lot of change — and while change is a constant, it can bring about uncertainty. Fellow wearer of multiple hats, Max Corcoran, was also named to a leadership role, taking on the tasks of Eventing Elite Program and Team Facilitator and once again using her extensive experience and expertise to guide the logistics and care of the horses.

“I honestly didn’t know, going into it, exactly what it was going to take for me to do this job successfully,” Bobby told me before Pratoni. “I’ve been lucky that I’ve seen every single part of [the sport], so nothing has been a surprise. But no one has done this job strictly just as a Chef d’Equipe. You’re slightly one step removed, kind of looking in and being of support when it’s necessary — and kind of knowing when to step back because riders know their programs are working on all cylinders.”

It’s a formula that seems to have worked. When asked about any factors that stand out as instrumental in the success Team USA found in Italy, Bobby talks about the strength of each rider’s individual program. It was a bit of a ‘don’t fix what isn’t broken’ scenario, which set Bobby up well to step in as a gelling agent with what could be labeled as quiet confidence ahead of the World Championships challenge.

“I have worn so many hats within High Performance for so long that it never felt like I was trying to make it up, what I was trying to accomplish,” he elaborated. “I felt very confident and clear in my own mind what it was going to take to bring a group of riders together.”

“There are a few things I keep going back to,” Bobby continued. Certainly helped by his previous experiences as both competitor and coach at this level, he, like the team, values the concept of respect. Everyone has a say. “Mutual respect, trust in the program that’s been set up for [the riders] to be a part of, and also every person feeling like they have equal opportunity. There has tended to be the perception of favoritism or that one person is ‘the chosen one’ – and I was one hundred percent not going to fall into that trap, perceived or not. And I think the riders appreciated it.” 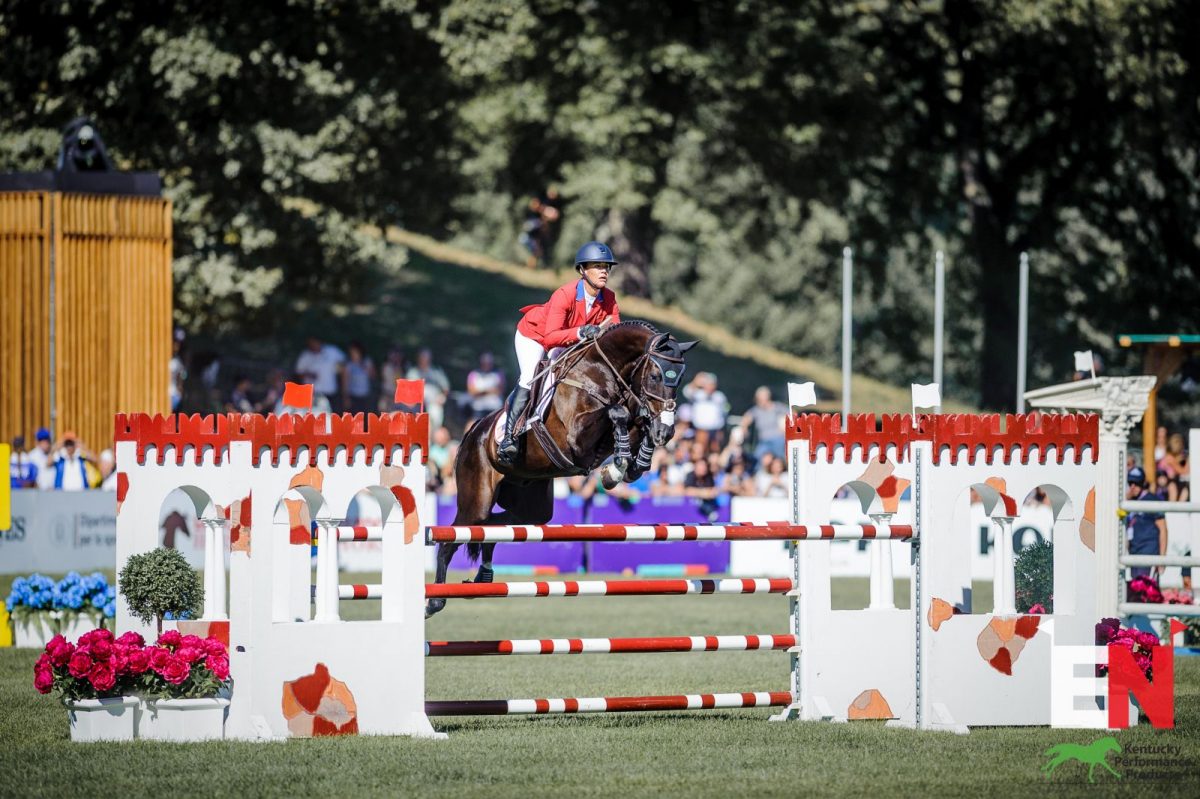 Earning the silver medal at Pratoni not only earns the Americans bragging rights, it also secures the qualification for the 2024 Olympics in Paris. This is an achievement that releases ripple effects, one of which is the fact that the federation can now send a primarily developmental team to the 2023 Pan American Games in Santiago. In recent cycles, a more experienced team has been sent to Pan Ams with a need to qualify for the Olympics, having missed out on a berth at the previous World Championships. Having the privilege of sending a mostly developing team will only serve to bolster what could be a burgeoning American eventing program if proper attention is paid to said development.

“It’s such an incredibly positive knock-on effect, getting this qualification off our back,” Bobby noted. “And we can send maybe one senior or Elite rider and then have the luxury of sending more of a developing team [to Pan Ams]. I think that is an incredible positive for our program.”

Bobby also holds hope that Team USA’s achievement in Pratoni will help elevate the sport more, and incite more youngsters to buy posters to hang on their bedroom walls. “I remember being a kid and watching the LA Olympics, and just being so inspired by [Team USA’s] win there,” he said. “And then the next generation had the same feeling with David [O’Connor] at Sydney, and we just haven’t had that in awhile. So I’m hoping this is going to inject a bit of enthusiasm among the people getting into eventing.”

But success cannot be wholly attributed to one factor, and it cannot be sustained off of one achievement alone. The other ingredient to success – and the one Bobby says the U.S. will need to continue to focus on in order to continue as such – is the strength and depth of an athlete’s program at home. 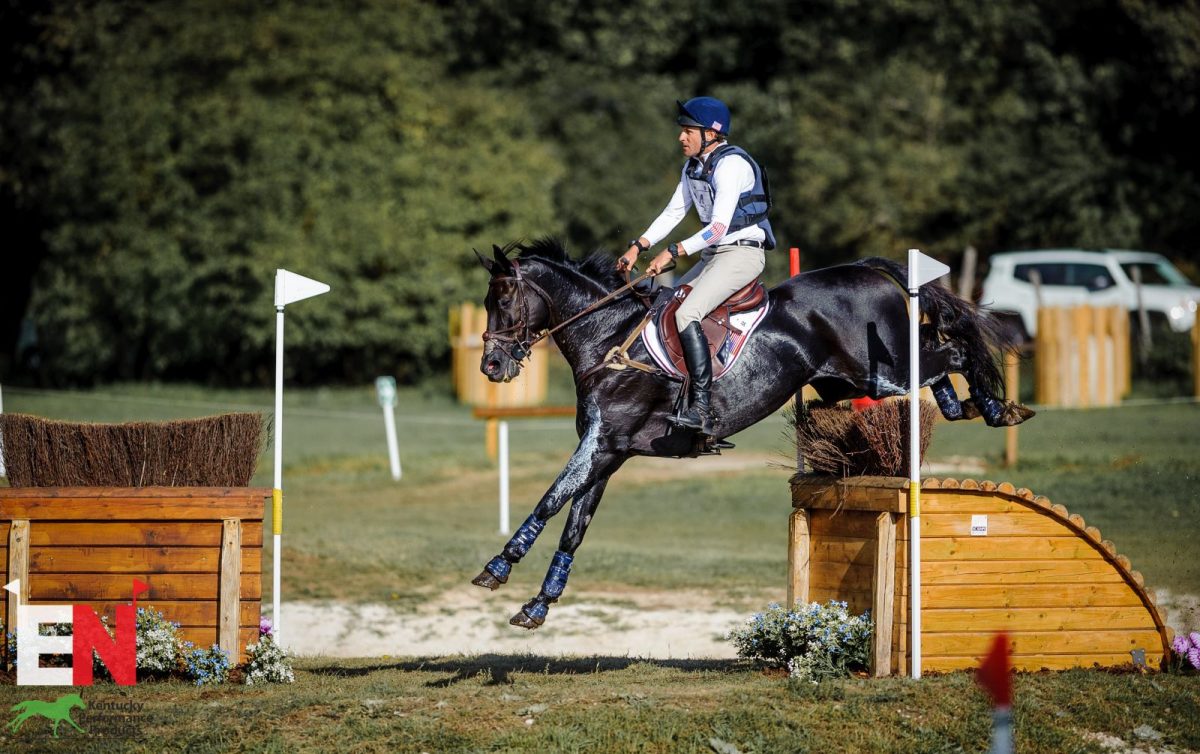 Boyd Martin and Tsetserleg filled the anchor role for Team USA — a choice chef d’equipe Bobby Costello explains was a simple one due to the pair’s extensive resume. Photo by Tilly Berendt.

“I think what absolutely worked for this group is that they were a very well-established, seasoned group of athletes with known, successful programs,” he said. “What those guys did over the weekend – you have to be operating in an environment where there is not one detail overlooked.”

This is a factor that needs to be further developed – from Bobby’s perspective, there are too few programs that have been developed to the point of consistent production as exemplified by those represented on the team. There are also too many riders falling through the cracks between the Developing Rider and Elite Squad levels.

“What Leslie Law has done with the Emerging Athletes is incredible. I wouldn’t change anything. But that 21 to 25, even 30 to 35 group – that’s the time when it’s very easy to get lost. So what I feel strongly about is that the next group of athletes coming along have got to really look at their programs and really have an honest conversation with themselves on if their program is good enough, thorough enough.” 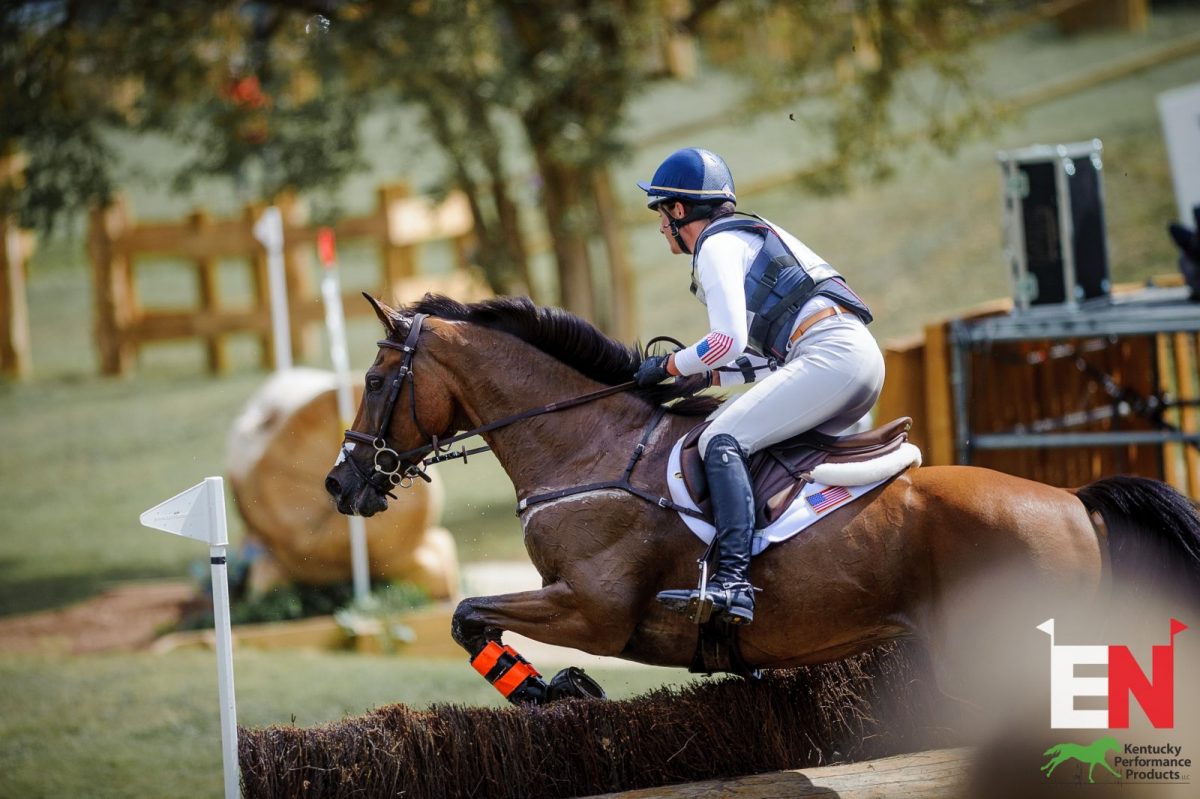 Vermiculus finds his way through all the flags for Lauren Nicholson. Photo by Tilly Berendt.

“I was in that boat in my late twenties, early thirties,” he recalled. “I never felt like I was going to get there. Mark Phillips kind of plucked me out of obscurity a bit and put my name forward for training lists, and without that I don’t think I ever would have made it. So, yes, these guys have to put themselves in a position where they can’t be denied, they have to go out there and show they’re on the pathway – but you’re also trying not to lose those very talented people that maybe just don’t have everything quite buttoned.”

Development also comes from experience, and Bobby encourages riders who are eager to make their mark on the sport to put themselves out there for Nations Cup opportunities.

“I think we have to use these Nations Cup competitions more,” Bobby explained, noting that on many recent Nations Cup decisions, the selectors were not choosing from a large group of applicants. “I believe USEF puts every good effort toward fielding these teams, there is just a depth issue. I’m often surprised that more people don’t target these. Nothing gets you experience faster, and at the very least you’re getting your name out there. Right then and there, you’re putting your name in front of the selectors, and you give yourself a good chance if you just put your name forward and take a risk.” 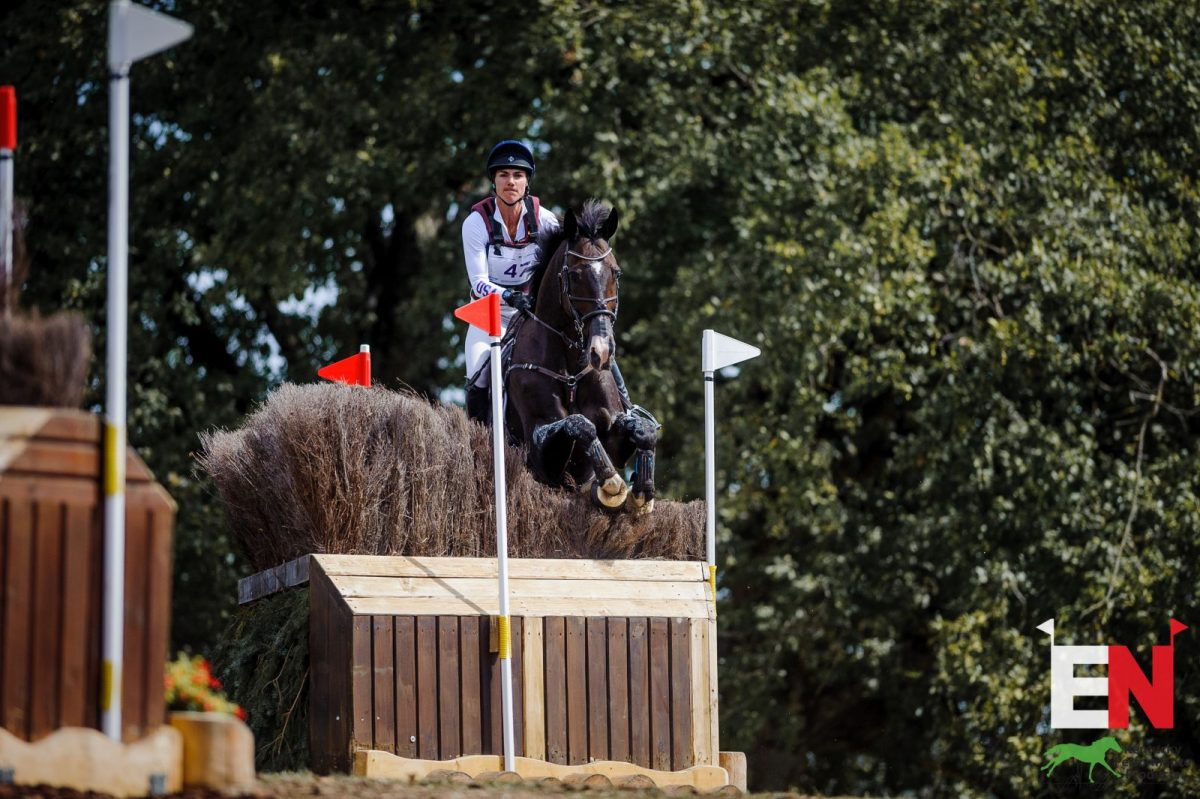 Exemplary of the depth on the roster was individual rider Ariel Grald’s stellar performance. Photo by Tilly Berendt.

It was pure team effort that brought the team medal and an overall excellent weekend home for the U.S. Off the bat, Bobby gives credit to his colleagues at USEF as well as fellow technical advisor Ian Stark for his strategic planning ahead of cross country.

“When I took on this role, I said as part of my proposal that I would like to employ Ian as the cross country advisor,” he said. “Even though riders had their own coaches, Ian was the filter for all of the information about the course, and from that we had a plan for the day. Lucky that everyone went out and had the same plan – go the straight ways, go fast, try not to have any time – and the day went well so we didn’t have to go to any plan B.” 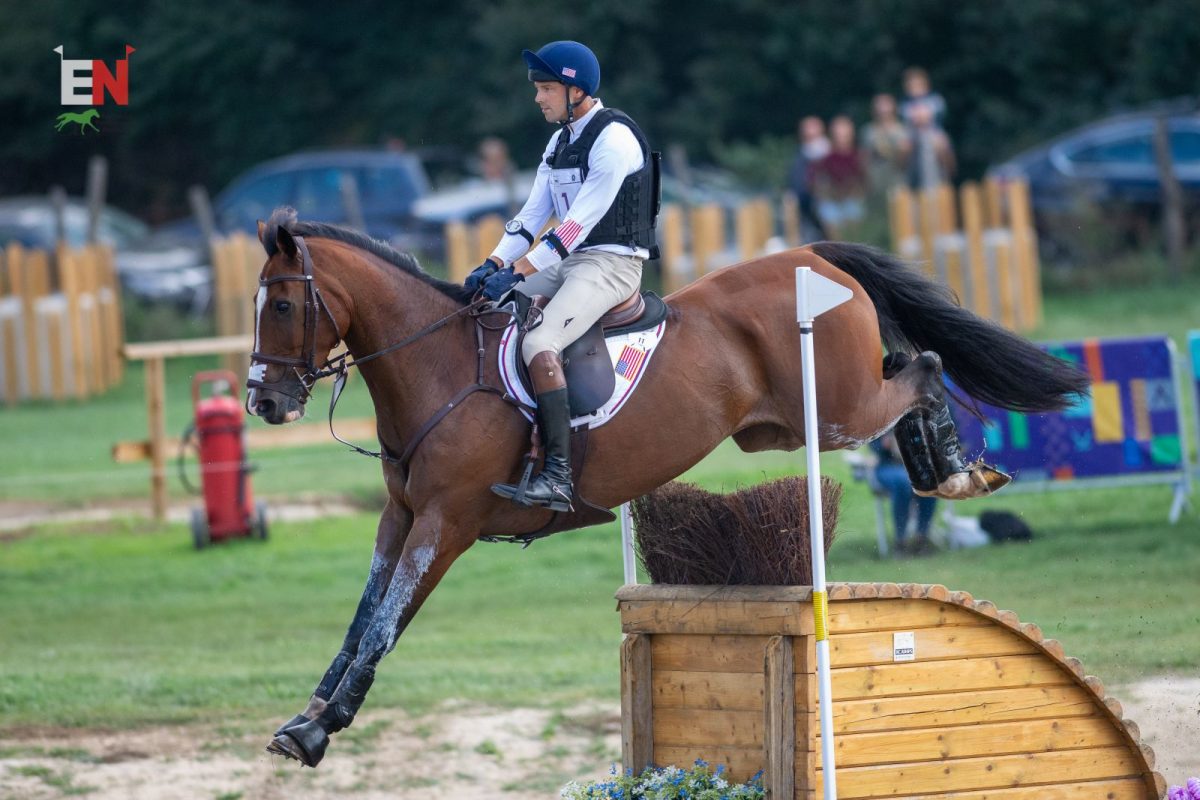 Will Coleman and Off The Record brought back valuable intel for the U.S. as pathfinders. Photo by Shelby Allen.

Show jumping would be the bone to pick, with the team collectively adding eight rails to their final tally (and – not that anyone’s doing the math, but to do the math and assuming Germany still finishes on a 95.2 – losing out on a potential gold medal), but both Bobby and the team remain adamant that no stone will be unturned in pursuit of improvement, both for this and squads yet to come.

“My job, if I were to keep doing this, is to sit down individually with all these riders and ask a million questions,” Bobby said. Previously non-committal on whether or not he’d consider applying to keep the chef d’equipe designation on a more permanent basis, he says now he’s planning to keep his name in the hat. A leadership trio of Graeme Thom, David O’Connor, and Bobby could certainly yield some hefty results. “I want to delve into how the riders see themselves being successful like the team was this weekend. Ask tough questions.”

“The riders, at some point, have to become supremely confident in what they have built,” Bobby continued. That confidence translates into a quiet mind in the saddle – that elusive not-so-secret weapon when it comes to competitive success.

The feelings are hopeful and positive as life returns to its normal frenetic pace at home. There’s a lot to feel good about this current generation of Team USA, but there’s also much to be done to keep the trajectory heading forward.

“This was about the riders and the work they did to be there. It was a very uncomplicated plan that we had for the weekend, and I think that’s something to learn from the past: believe in your program, keep it simple, go out and do your job well.”