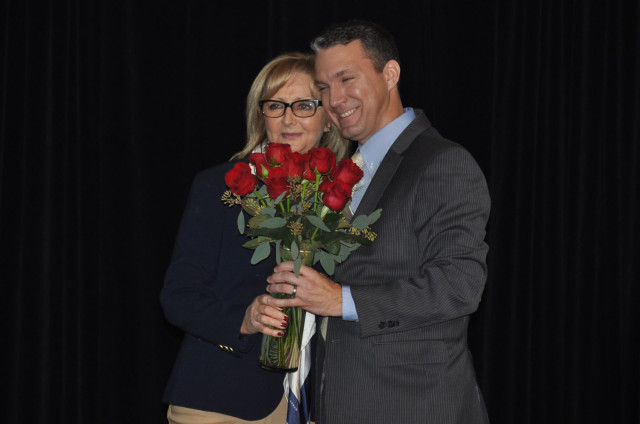 We’re in the home stretch now of the 2015 USEA Annual Meeting & Convention in Washington, D.C., and this third day has been packed with action. We started the morning with the Eventing 2016-2026 USEA Summit and Town Hall Meeting, a three-hour long meeting in which the big questions currently facing the sport were addressed; you can click here for a full summary.

Tonight’s Hall of Fame Gala is still to come. While we wait for the festivities to kick off (so you can stalk EN’s Instagram to see what everyone is wearing), read on for key tidbits of what else went down today. Then click here to catch up on all of EN’s coverage from the #USEAConvention.

Jo Whitehouse officially passed the torch to new USEA CEO Rob Burk today in the USEA Annual Meeting & Luncheon. USEA President Diane Pitts gave an emotional sendoff to Jo, who will be inducted into the USEA Hall of Fame at tonight’s gala.

“Those of you who have had the pleasure of knowing her know what a treasure she has been,” Diane said. “She has been involved with the association for 30 years and has been CEO for 17 years. She has led this organization with amazing insight, style and grace.”

The EN team would like to personally thank Jo for her service and dedication to the sport, as well as her seemingly endless supply of patience for this crazy website called EN that popped up on the internet during her tenure.

Rob is already a leader in our sport, and we look forward to working alongside him and the rest of the USEA team as we all seek the mutual goal of offering support to and promoting this wonderful sport we all love. Go Eventing.

The Volunteer Initiatives meeting was packed this afternoon as Holly Covey, Bonnie Kibbie, Carol Kozlowski and Hannah Ong outlined their ideas for how we can recruit, encourage and reward volunteers in the sport. Many of the ideas they shared came out of the late Seema Sonnad’s vision for how we can make it easier to volunteer.

We’ll have a full report on the meeting coming your way soon, but the exciting news is that new USEA CEO Rob Burk attended the meeting and gave this topic a slot at tomorrow morning’s Board of Governor’s meeting so they can propose the creation of a USEA Volunteer Committee.

Here’s a funny moment that came up during the lively discussion. Carol said she would love to see more professionals volunteering “alongside the common people” at competitions: “How much would kids love it if Boyd Martin was checking bits? That would make their whole season.”

Stay tuned for much more on this topic. Go Volunteers!

David O’Connor led a “From Toronto to Rio” session this afternoon in which our gold medal Pan American Games team — Phillip Dutton, Boyd Martin, Lauren Kieffer and individual gold medalist Marilyn Little — shared stories about the experience. We’ll have a full post soon highlighting some of their memorable quotes.

Much of the other information in this session in regards to the 2016 Olympic Games in Rio de Janeiro was already shared in the High Performance sessions over the past two days; you can click here and here to read the reports. One new interesting tidbit is that construction on the Olympic Village, where the U.S. Olympic team will be staying, is about 88 percent complete.

Marilyn Payne, who has been named the president of the ground jury for the 2016 Olympics, gave an excellent presentation to the High Performance riders on the methodology of dressage judging. That report will also be coming your way soon.

She also doled out numerous pearls of wisdom, like this one: “When things go wrong, don’t get annoyed. Don’t get tight on the horse. Don’t get demanding and slam to halt and pull back. The judges hate that. Never lose your cool and get rough with your horses in the ring. Not only will that score go down, but your rider score is going to go into the gutter.”

Marilyn concluded the session by going over the movements in the dressage test that will be used next year in the Olympics and answering questions from the riders. Many thanks to Marilyn for volunteering her time!

Thank you so much to all the readers who have been following along with our coverage of the USEA Convention. It’s been awesome to meet and chat with so many of you this weekend.