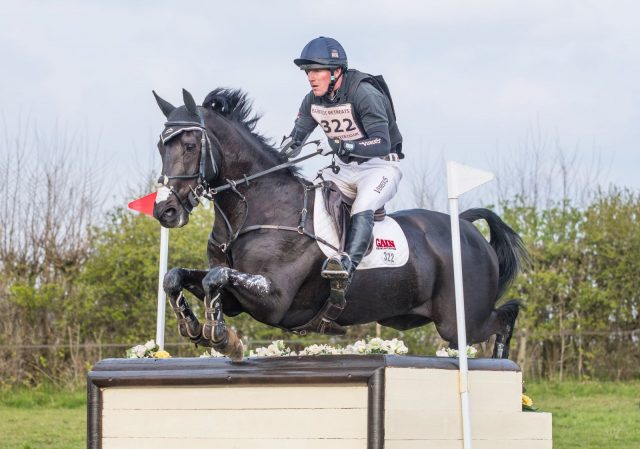 Cillnabradden Evo proves once again that he’s unstoppable in a CCI4*-S. Photo by Tilly Berendt.

In Burnham Market’s game of thrones, you’re Townend or you lose, to coin (steal) a (slightly cumbersome) phrase. And after all our talk about Oliver Townend‘s incredible record at this event, he went one better today by not just taking the win in both CCI4*-S sections, but by breaking his own record twice over. All in a day’s work when you’re the world number one. 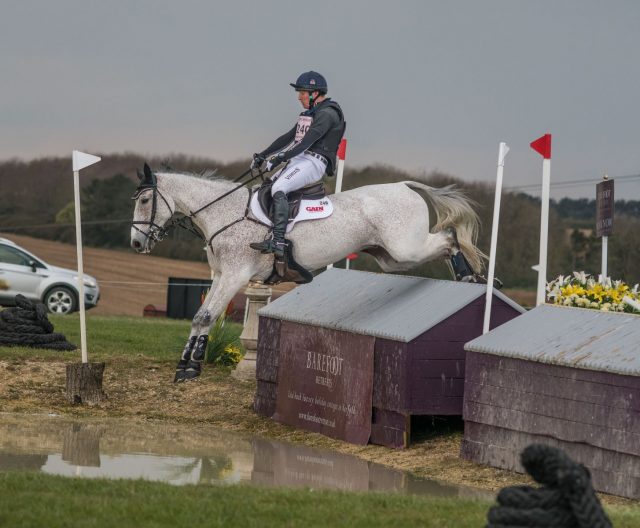 Oliver previously held the record for the lowest-ever finishing score in this class on his Kentucky winner Cooley Master Class, with whom he finished on a 25.7 when taking the win for the second consecutive year in 2017. Today, both Ballaghmor Class and Cillnabradden Evo surpassed this – the former crossed the finish line just one second over the optimum time to win section B on a score of 22.2, while the latter finished on his incredible dressage score of 21.3 to take section C. It’s a new record that will take some serious work to beat – and if it can be done, we can only expect it to be done by Oliver himself once again.

In the meantime, though, there’s a certain big event in Gloucestershire to look ahead to, and both of Oliver’s winners hold spots in the line-up. Though he can only bring forward two of his four entries, today’s results will have offered him an enormous amount of useful insight ahead of the final decision. 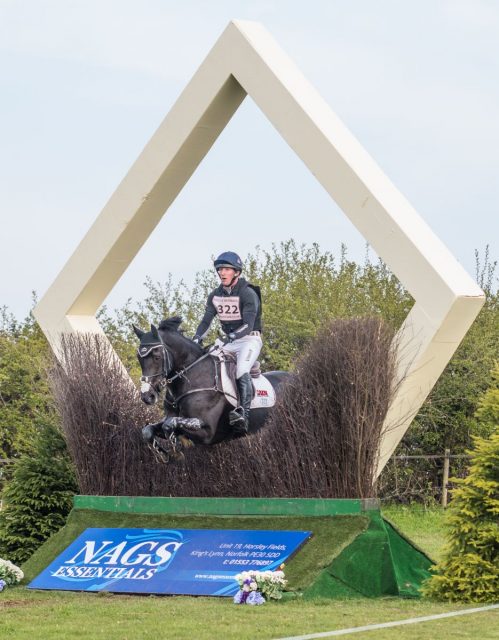 “Both were fantastic in all three bits, both were very professional in the dressage – calm, and nice, and established,” he says. “In showjumping they both jumped very, very good rounds, very safe rounds, but it was on the cross-country, really, that I was most impressed with how they did it. They were both on the bridle, and both had their ears pricked, and not once did I even have to squeeze – they just took me round there. They both had a great run, and neither of them were blowing as they came across the line. Neither of them broke a sweat, either – though whether it’s just because it’s freezing cold, I don’t know! They’re very different horses to manage and ride, but both are top-class in their own right – I wouldn’t mind a yard full of them.”

Oliver capped off his successful weekend with a second-placed FOD of 30.3 in the Advanced aboard Badminton entrant Ulises.

“He couldn’t have performed any better in all three phases,” says Oliver, who was pipped at the post by Kitty King and Vendredi Biats. “He was beaten by an exceptional horse, and he was very, very good.” 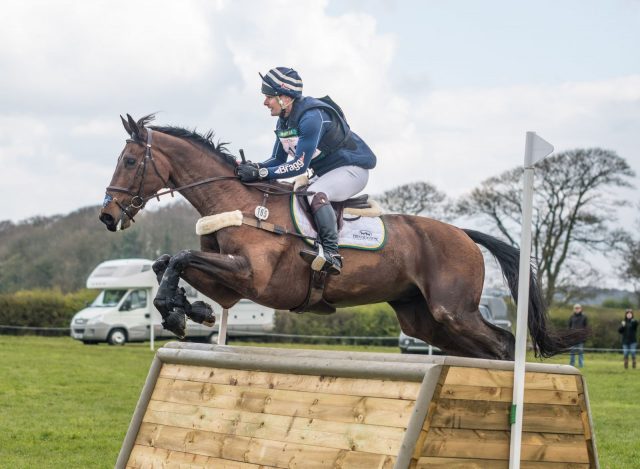 Alex Bragg’s Zagreb made light work of a tough track at Burnham Market ahead of his forthcoming Badminton run. Photo by Tilly Berendt.

Foot-perfect performances across all three phases catapulted Badminton-bound Alex Bragg and Zagreb into second place in section B. They finished on their dressage score of 26.2, and the fifteen-year-old gelding showed that he’s still getting better and better.

“He’s felt really good – I actual feel like after the winter he’s stronger and more supple, and still improving,” says Alex. “I think we both are, in all honesty, so maybe it’s a bit of each of us. The last few years, we’ve really learned how to prepare him and what works for him at the higher levels. For personal reasons we never made it to Belton, so with Badminton looming, I needed to figure where I was with him. So this was quite a significant result for him, not just for the result, but for how he felt throughout and after. He’s fresh as a daisy. After cross-country I gave him another twenty minutes work to check his stamina and make sure he was still responding well – it was a way to test if can he still carry himself after running that distance. Because in a minute, he’ll need to run another five! Everything I’ve wanted from this weekend, I’ve got.”

“For me, it’s quite a nice, inviting course,” he says. “There was a question with a double of gates that I didn’t get – it didn’t promote nice riding, but then, I  suppose, it’s cross-country. I had to work a bit harder with the first-timers to help them read the question. Other than that, it rode really nice and really smooth. That you had to go from a left-handed to right handed corner near the end of the course really tested the rider, and I liked that question. It was a good test for riders, whereas the gates were almost there to trip the horses up.” 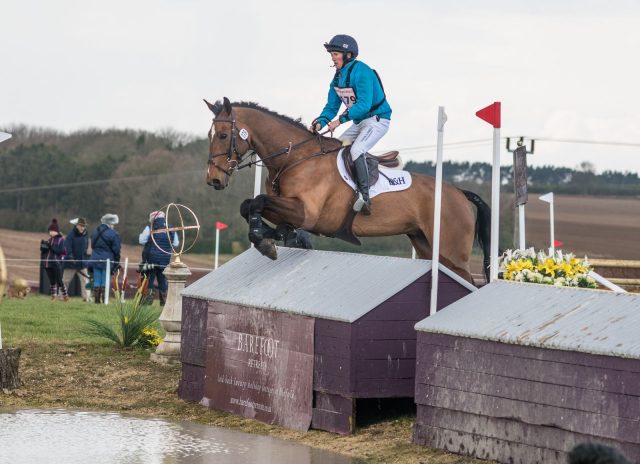 Tom McEwen‘s Belton winner Figaro van het Broekxhof demonstrated consistency in form, finishing third in section B after adding just 1.2 time penalties to his 27.4, while Piggy French piloted the exciting Cooley Monsoon to fourth in his CCI4*-S debut. The eleven-year-old son of Ramiro B is owned by Absolutely Fabulous star Jennifer Saunders, who braved the worst of British weather to cheer her horse around the track. 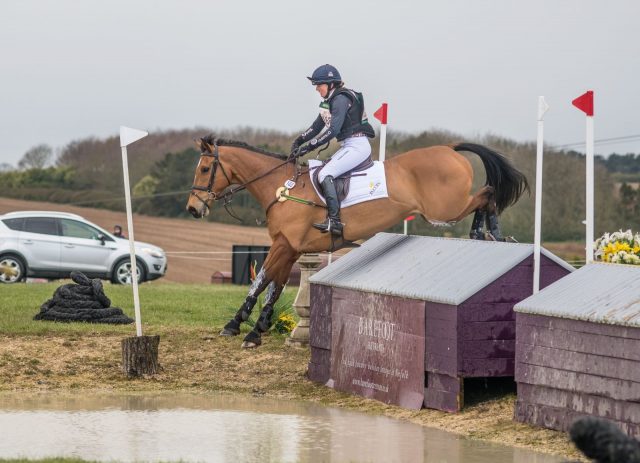 Cooley Monsoon steps up a level – and up to the plate – with Piggy French in the irons. Photo by Tilly Berendt.

Despite his relative inexperience, ‘Eddie’ looked confident and supremely capable around the course, though 2.8 time penalties dropped them down a placing. Fifth place went to Sweden’s Ludwig Svennerstal and his WEG mount Stinger, who delivered one of three FODs in the section to finish on 29.9. 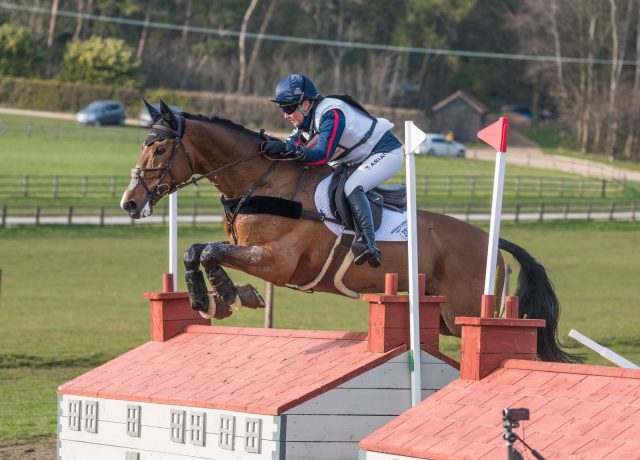 Laura Collett took second place to Cillnabradden Evo in section C, adding 3.2 time penalties to her 23.1 dressage to finish on 26.3 with her Blenheim CCI4*-S winner London 52. Though she was initially awarded a handful of erroneous time penalties and a 15 for missing a flag at the corner at 22B, she was successful in her appeal, giving the phenomenally talented London 52 another excellent result on his record sheet. She joins a vocal majority in opposition to the FEI’s revised flag rule, which has proven contentious at a number of international fixtures worldwide since its inception this season.

“It’s just not fair for the horses or the owners,” she explains. “I was 100% adamant that he hadn’t bulged off the line; I felt the flag on my foot, so it was me that knocked it. You know when your horse is a bit off the line, when you’re trying to hold them and they’re thinking about running out, but if they jump the jump, then they jump the jump. I think it’s overcomplicating things – it’s confusing for the spectators, confusing for the riders, and stressful for the owners.”

Top riders are rallying for a change to be made prior to the forthcoming five-stars at Kentucky and Badminton – we’ll be bringing you more on this in the next few days. 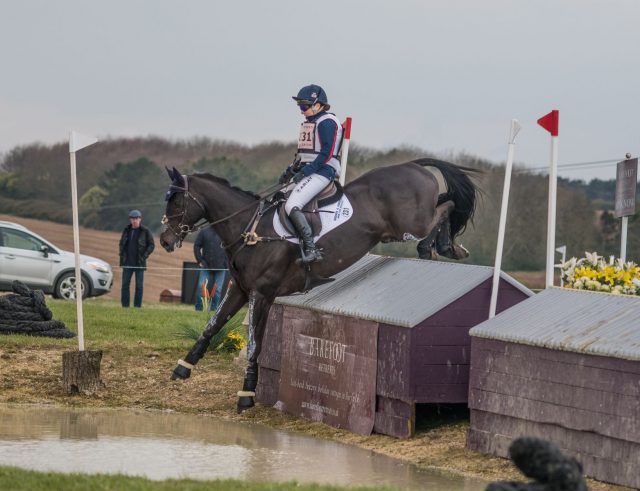 Dacapo skips into the water with Laura Collett. Photo by Tilly Berendt.

Laura also enjoyed success in section B aboard Dacapo, who finished ninth on 33.7 after adding 9.2 time penalties across the jumping phases to his dressage score of 24.5.

“They’re such super horses – they’ve both come along so much since last year,” says Laura of her talented geldings. “They both made big steps up last year and finished the year really well, so it’s really exciting.”

Dacapo finished third to London 52 in last year’s Blenheim eight- and nine-year-old class, though has largely flown under the radar in comparison to his headline-making stablemate.

“He’s holding his own, bless him!” laughs Laura. “He’s come on an awful lot – he’s always been brilliant, jumping-wise, but he seems to really have cottoned on now. In the dressage, it’s like you just press ‘go’ now – he’s disgusting in the warm-up, because he hates other horses, so you sort of have to just go in, but that’s where he’s so good. You’d watch him warm up and think it’s going to be a disaster, but it’s like he gets on the centreline and thinks, ‘oh, thank god, there are no other horses here!’ He was foot-perfect at Belton, and foot-perfect again here, and he genuinely feels like he’d jump anything I put in front of him.”

Dacapo will head to his first CCI4*-L at Tattersalls this summer, while London 52 will be aimed at Bramham in June. 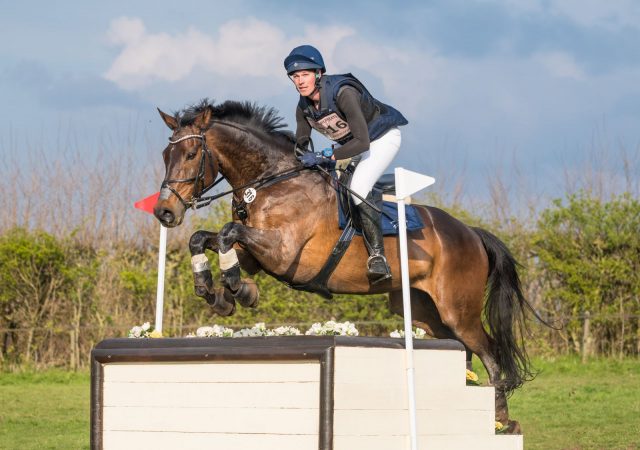 Germany’s Jörn Warner may have only moved to Chris Burton’s yard a month ago, but he’s already obvious absorbed much of the lightning-fast Aussie’s innate ability to ride to the clock. He added just 0.4 time penalties in the showjumping to his 26.5 dressage, finishing third in section C with Vicco Pop. Jörn, who previously trained with Bettina Hoy, first came to the UK several seasons ago to base with fifth-placed Bill Levett and contest his first CCI2*-S. Now, he has six horses in the UK and big plans for the season ahead. Remarkably, he and the fifteen-year-old Vicco Pop have tackled the sport together from the ground up.

“I bought Vicco Pop as a five-year-old – he was qualified for the German young horse championship and also Le Lion d’Angers,” explains Jörn. “We really did it together – our first cross-country fence was together. He’s a diva – he knows that he’s a good one, and he likes in the dressage if there are a lot of people, then he’s looking a bit more smart, like a show master. He likes shows; he likes a lot of people to see him.”

Jörn, who also competes in pure dressage up to Intermediare, spent five years working in this discipline before making the switch to eventing. Now, he hopes to aim his top horse for the European Championships after runs at Chatsworth CCI4*-S and Tattersalls CCI4*-L.

Bramham under-25 winners Emily King and Dargun finished fourth on 29.4 ahead of the horse’s five-star debut at Badminton, while Australia’s Bill Levett enjoyed a redemption arc after falling foul of the flag rule at Belton. He and Shannondale Titan finished fifth on 29.5. 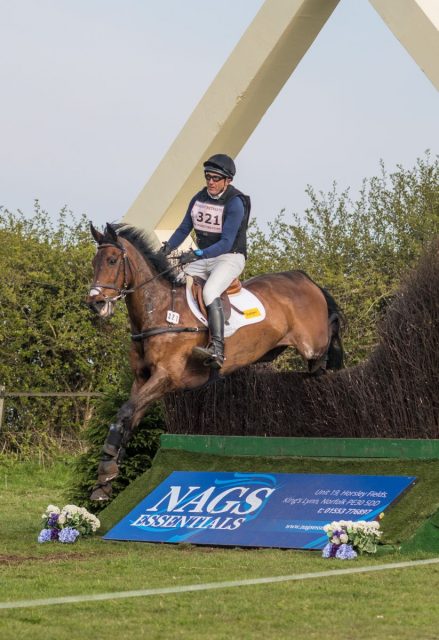 Bill Levett and Shannondale Titan get their just rewards with a fifth-place finish in section C. Photo by Tilly Berendt.

We’ve seen sun (sort of), we’ve seen snow (seriously), we’ve seen seriously top-class horses, and now I, for one, am seeing the inside of a service station KFC on a nondescript section of motorway  – so with stars in my eyes and possibly a faint trace of hypothermia, I bid you a sleepy adieu from Burnham Market. It’s been real (cold). 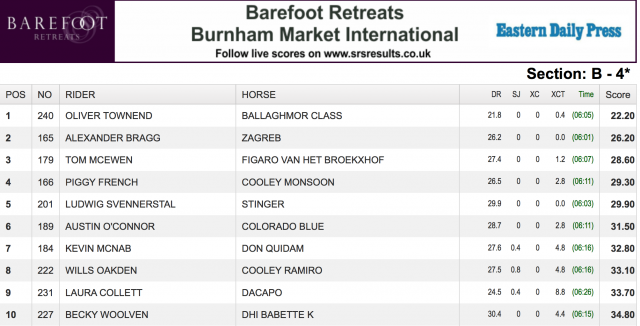 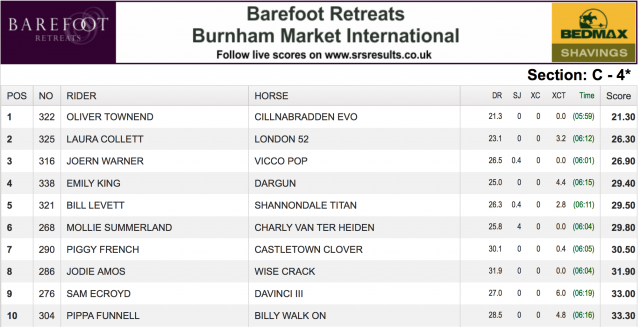