William Micklem returns today with the final column in his series on the subject of happiness, which has resonated with many EN readers around the world. If you missed them: part 1, part 2, part 3, part 4. Thank you to William for writing, and thank you for reading. 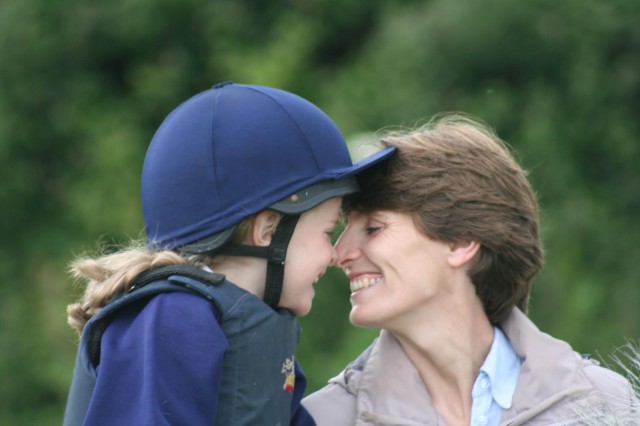 Thinking you have little worth, putting yourself second, being humble, and generally sacrificing your potential because there are other priorities in life is self-defeating, because others will be the weaker for it. The others being all those you would like to help and support, your family and friends, your team members and work colleagues, or indeed your horses.

Who am I to be happy?

Nelson Mandela got it right when he quoted Marianne Williamson’s word in his inaugural speech in 1994:

“We ask ourselves, Who am I to be brilliant, gorgeous, talented, fabulous? Actually, who are you not to be? … Your playing small does not serve the world. There is nothing enlightened about shrinking so that other people won’t feel insecure around you. We are all meant to shine … It’s not just in some of us; it’s in everyone. And as we let our own light shine, we unconsciously give other people permission to do the same. As we are liberated from our own fear, our presence automatically liberates others.”

However this series of articles has sparked several comments along the lines of  ‘our happiness has to be of secondary importance to our horses,’ or ‘happiness is a selfish quest,’ or  ‘my priority has to be surviving not happiness.’ But my belief is that by being the best you can be, developing your own mental and physical strengths, you will find happiness and be better able to do more with your life. As the footballer and philosopher Albert Camus said, “But what is happiness except the simple harmony between a man and the life he leads.”

Confidence says “Will do,” while Competence says “Can do.” Confidence without competence will always lead to a fall … what is often described as misplaced confidence, but competence without confidence rarely produces success. Performance is a ‘mind game’ and there are tens of thousands of very competent performers who never fulfil their potential because of a lack of confidence when under pressure. The not so surprising thing is that this applies to our horses as well.

At home horses with good training and preparation can gradually become competent in the various exercises required in dressage or jumping. But this competency so often suddenly falls through the floor when a horse is faced with the hustle and bustle and unfamiliar surroundings of a competition, or a rider who lacks the confidence to ride as they do at home.

This scenario shows the wisdom of taking the time to quietly and progressively give both your horse and yourself exposure before taking yourselves anywhere near the limits of your performance abilities. Exposure to travelling and other horses, varying environments and weather, and exposure to a very low level of competition — this must be done until you both develop the confidence to look the competition world in the eye and say ‘I am happy being here.’

I am firmly of the belief that too much stress and unhappiness, early on in the life of a horse, can produce the equivalent of a nervous breakdown, from which the recovery period required can be measured in years rather than months

For the elite rider the pressure of being watched by thousands and having money and championships resting on their performance is huge, but the pressures on a low level performer may also be equally harmful to their possible performance. So the quest for happiness is worthwhile across the board. The kick off point is to look yourself in the eye and accept the fact that as the ad says ‘you are worth it.’

It is worthwhile picturing the thousands of people who never put themselves ‘in’ and have a go and are the poorer for it. It is worthwhile reading the words of the thousands of people who don’t regret the things they did but the things they didn’t do. It is worthwhile remembering that horse sports are a sport for life and sport for all, giving both a bigger window of opportunity and more truth to the phrase ‘allowing ordinary people to do extraordinary things.’  It is also worthwhile remembering that we all start from zero, even the Olympic Gold medalists and world champions.

Particularly in the horse world riders are often put off progressing, because they are told by their trainer or others that there is a rider near by who could do a much better job with their horse. But this will always be the case, and if you took this argument to its logical conclusion all horses would just be ridden by Michael Jung, William Fox-Pitt and Philip Dutton! The bottom line is that people are more important than horses and some compromises will always have to be made, with the potential of the horse being sacrificed for the needs and sometimes safety of the rider.

And finally it is worth remembering that there will always be the people we call in Ireland ‘the hurlers on the ditch.’ The people who sit on the sidelines and criticize and complain. As the great Australian poet Banjo Patterson said, “the race will never be run, on sea or sky, or land, than what you’d get it better done by the Riders In The Stand.” But you have to ride your own race, ignore them, and surround yourself by the positive people who will cheer you in the stand and encourage you to new personal bests.

So you have a go and delight in life and the opportunity, and you look for the things you love and the possibilities, and you subscribe fully to the idea that things turn out best for those who make the best of the way things turn out. And you do the most powerful performance enhancer of all time, which is you take one small step at a time, because yard by yard things are hard and inch by inch life’s a cinch. And you become competent with the guidance of good coaches. And thus you become confident and happy with what you do, and thus you become successful!

Of course everyone is an individual and everyone will find happiness in different directions. It is vital to recognize the diversity and individual needs of humans and horses because this is the basis of living and working together and the foundation of looking at each other straight in the eye.

I mentioned earlier, with a twinkle in my eye, that the famous philosopher Albert Camus was a footballer? Yes he did love football and played for many years, but he also saw in sport a way of giving meaning to life. “After many years during which I saw many things, what I know most surely about morality and the duty of man I owe to sport ….”

Camus was referring to such things as the principle of sticking up for your friends, of valuing bravery and fair-play. A real connection here to Ultimate (Frisbee) and their Spirit Award. Camus’s belief was that political, religious, and educational authorities try to confuse us with over-complicated moral systems to serve their own needs, whereas greater simplicity would help us all.

Of course simplicity is the master key for so much in life, and if simplicity is what we need to sum up happiness I don’t think it is possible to beat Mahatma Gandhi: “Happiness is when what you think, what you say, and what you do are in harmony.” And he also said this: “An eye for an eye only ends up making the whole world blind.” So let’s go forward together with a little more peace and harmony … and happiness.

Happy Christmas to you all.