Seriously, someone needs to make a reality show about you guys. Thirty more #EventerProblems, coming right up!

#eventerproblems when your horse decides that a full blown gallop across MXK is now part of the dressage test. #dressage #newusdftestmaybe #okayozzie #eventingnation #onereiningit A photo posted by Taylør |-/ (@eventer480) on Jul 28, 2015 at 1:49pm PDT

He will do anything to get out of Dressage schooling. #eventerproblems A photo posted by Kelly Rieser Photographic (@kellyrieserphotographic) on Jul 28, 2015 at 7:28am PDT

When the horse who has been to Rolex, Badminton, Burghley and Weg spooks at the beginner novice fences on your hack.. good job Northern Spy #eventerproblems #floppyears

This may be more than just #eventerproblems…

Only the good boyfriends babysit for soaking… #eventerproblems #millbrooksintwodays #ugh A photo posted by @cdales on Jul 28, 2015 at 6:01pm PDT

The correct way to bring in jumps.. Safety first?¿ #eventerproblems

When the work-a-holic OTTB on stall rest takes you to the jump arena every day on his hand-walks just to look at it… #eventerproblems #notreallyaproblem A photo posted by Erica Spradling (@xbetterbesocialx) on Jul 29, 2015 at 2:54pm PDT

When your horse comes in with perfect zebra stripes. #camouflage #muddypony #equestrianproblems #eventerproblems #horsenation A photo posted by Liz Arnold (@earnold89) on Jul 30, 2015 at 12:15pm PDT

When you have to move ALL the tack that’s at your house… You can never have too much! this doesn’t even include what’s out with the horses, or winter blankets…

Pi at least has the decency to look a little bit guilty about his romp in the mud… #theswampmonsterisdead A photo posted by Kate Drake (@katedrakevt) on Jul 30, 2015 at 6:32pm PDT

When you’re stroking a horses muzzle and they clear their nostrils. #goodluck #eventerproblems #equestrianproblems A photo posted by Becca (@beccarides) on Jul 30, 2015 at 2:34pm PDT

Getting fashion inspiration from the horse inspection photo gallery instead of fashion magazines #eventerproblems http://t.co/IWr8GuXXio

Watching Soccer on ESPN before my leg surgery because there is nothing live on @myfei_home today! #EventerProblems pic.twitter.com/2Lphq3KHUX

When ur blanket rack breaks b/c ur TBs have too many clothes, & baling twine is the obvious answer #eventerproblems pic.twitter.com/qVcCxV3Jhy

When a friend opts for no anesthesia for a root canal so that she can still meet you to XC school….#eventerproblems pic.twitter.com/XoDgUXToQn

Is it indicative of a problem if I put the local Dover Tent Sale as a notification in my calendar? #horsepeopleproblems #eventerproblems

Getting home from a horse show and thinking your feet are really tan until you shower and realize it’s just dirt. #EventerProblems 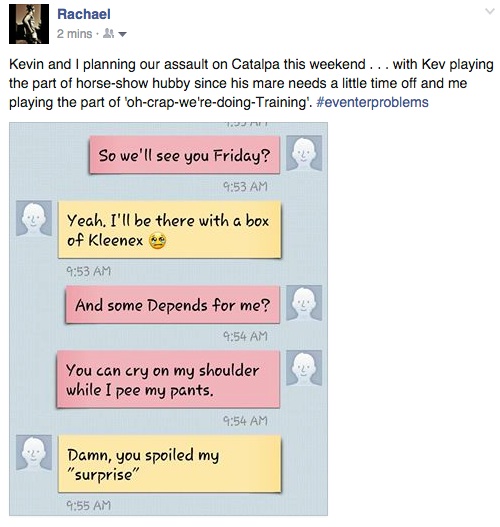