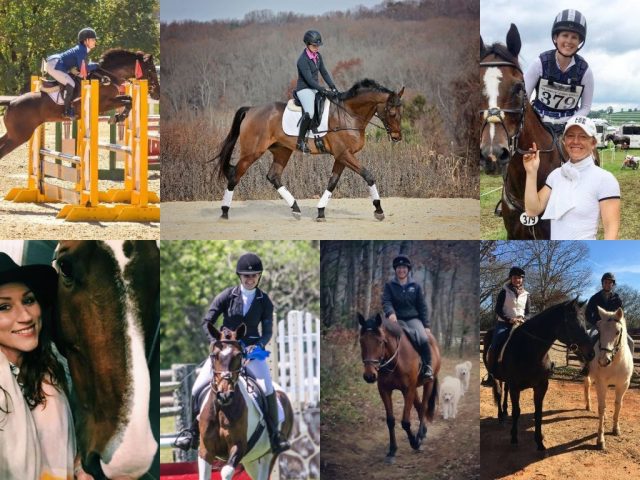 Every time I hit “Save Draft” — whether it’s for a routine News & Notes post I’ve whipped together or for a rider profile that’s taken me weeks to find the right words – I pinch myself a little. Our dearest Leslie Wylie already put into words what I feel as well — that “it is an honor and a privilege to be a steward of this website.”

This team of eventing fanatics behind your computer screen is a kooky, creative, passionate bunch and I think I can speak for all of us when I say we feel #blessed to be bringing you your daily eventing fix. 2017 has been a tumultuous year in and out of our sport, and in some cases in and out of our own lives.

With another year waning and 2018 on the horizon, we wanted to take a moment to wish you a very Happy New Year from our team behind the screen by sharing what we were up to over the past year and what we’re looking forward to in the year ahead.

Favorite horsey moment from 2017: Visiting Rebecca Farm was one of my most memorable experiences of the year. Though the photos are incredible, they still somehow don’t do it justice. The venue’s natural beauty and the talented horses you see there, makes it heaven on earth for eventers.
Favorite non-horsey moment from 2017: Adopting my dog, Franklin.
Favorite article I wrote in 2017: My favorite story to write this year was about Amanda Gantz, a converted hunter rider who two years after a breast cancer diagnosis found herself prepping for a longtime goal of competing in the American Eventing Championships. I so enjoyed talking with Amanda. Her natural grit and bubbly personality were contagious.
Stupid thing my horse did in 2017: This year he was pretty feral from start to finish! There were about 4 weeks in there when he lived out completely because he absolutely wouldn’t let me catch him…
What I’ll be drinking on NYE: Champagne of course!
What I’m looking forward to in 2018: My personal riding took a backseat this year, so I thoroughly enjoyed staying involved with the sport and working with the best team around at EN. Next year I am looking forward to making the trip to my first World Equestrian Games. Cheers, y’all

Favorite horsey moment from 2017: 18-year-old Mr. Medicott’s heroic clear show jumping round at Kentucky to become the USEF National CCI4* Champion in the final upper-level competition of his storied career. I burst into tears when he cleared the last.

Favorite non-horsey moment from 2017: My husband Josh and I somehow squeezed in a trip to Holland and Belgium between The Fork and Kentucky in April. We expected Amsterdam to be our favorite destination, but Belgium stole the show. Beer and chocolate galore!

Favorite article I wrote in 2017: Out of the 328 articles I wrote for EN in 2017, these two stand out as my favorites: Phillip Dutton On Life, Lee Lee and What’s Next and In Loving Memory of John Alliston.

Stupid thing my horse did in 2017: Got knocked up! (My OTTB mare Mia is a surrogate for Stephanie Cauffman’s super mare Mistry Oak, dam to Chatsworth Third Revolution, who finished 3rd in his first CCI1* at the Ocala Jockey Club. Baby by Diamant de Revel coming spring 2018 and we are SO excited!)

What I’ll be drinking on NYE: I’ll be in Iceland because I lost the vote to go somewhere that doesn’t require me to wear thermal underwear, so I’m guessing some sort of hearty Icelandic beer. Skál!

What I’m looking forward to in 2018: Continuing to compete Jimmie Schramm’s Bellamy, the most perfect horse in the entire world.

Favorite horsey moment of 2017: The moment the counter ticked over to £500,000 and Cooley Rorkes Drift was secured for Jonty Evans. It made me realize just how incredibly special the global eventing family is, and I’ll never forget that! A close second goes to the sheer amount of emotion in the collecting ring at Badminton when Andrew Nicholson realized he’d finally won it.

Favorite non-horsey moment: Did anything good happen outside of the horse world in 2017?! I mean, Prince Harry’s officially off the market now, so I’m considering this a write-off year for non-horsey joy.

Favorite article from 2017: This is such a tough one as I had some seriously great adventures with EN this year. Getting to cover Kim Severson’s Blenheim win was a real privilege, and having quality time with Chinch in France for two weeks was pretty great, too. But I’ll have to go with my very first piece, Eventing in the US vs the UK – purely because finally becoming part of the EN family was one of the most special parts of my 2017! #soppy

Stupid thing my horse did in 2017: The German Princess tries to outdo himself in the stupidity stakes on a weekly basis. Having to be escorted off the gallops at home by a very green four-year-old, because he totally and completely lost his damn mind, was a particularly shameful moment, and one which I’m not sure we’ll ever quite live down…

What I’ll be drinking on New Year’s Eve: ALL THE THINGS. Certainly all of the gin. And possibly some absolutely lethal sloegasms – that’s sloe gin and prosecco, for those of you who fancy making some bad decisions.

What I’m looking forward to in 2018: Getting back on the road with Chinch, of course! But also getting back into the start box myself, after a few years out of competition. The German Princess is also thrilled. I think.

Favorite non-horsey moment from 2017: My husband and I bought our first house in October, which despite being new construction still has five million projects we’d like to accomplish. It’s been a huge bright spot for the year, a great distraction from some tough realities this fall, and it’s absolutely a blessing to have cut the commute to the barn in half.

Favorite article I wrote in 2017: My favorite articles are often a bit more controversial, as I have a chance to sneak out from behind my numbers and toss out my actual opinions. I wrote the editorial The CCI3* Debate: Does the U.S. Need More? after hearing about Richland and was gratified to see the U.S. take a step forward and add the Ocala CCI3* to the schedule for 2018.

What I’ll be drinking on NYE: Gin and tonic

What I’m looking forward to in 2018: Testing out the waters at Modified with my (not-so) baby squid by the summer, with hopefully a move up to Prelim by the fall and a T3D to cap the year off.

Favorite horsey moment from 2017: I went to my first “away” show this fall and we stabled overnight at the GMHA Festival of Eventing. It was a fun weekend of riding and learning with friends and family by my side. Plus, I adore Vermont!

Favorite non-horsey moment from 2017: One of my good college friends got married this summer and her wedding was an epic time! It was a super night of dancing and catching up with friends.

Favorite article I wrote in 2017: I have two: one happy and one sad. The happy one is A Behind-the-Scenes Look at How William Fox-Pitt’s Central Park Catch Ride Came to Be because it was such fun hearing from Anna how the whole thing came about. The sad one is In Memory of Aimee Witherspoon: Friend and Adventurer. I obviously wish it didn’t have to be written, but hearing from Aimee’s friends was truly touching and I found myself shedding tears as I typed for someone I had never met. It was the hardest, but most moving thing I’ve ever written.

Stupid thing my horse did in 2017: Since the competition season has ended and my pony, Maggie, has started to stock up in one udder. Just one. Yes, it look like she has a boob. It’s not a tick bite, not an infection, not an abscess or a cyst – I’ve tested her for the works at this point. The only thing that makes it go away is exercise; 30 minutes of trotting and it’s totally deflated. Then the next day it’s a boob again. It’s very bizarre.

What I’ll be drinking on NYE: I’ll be hanging out at a friend’s house who makes a mean sangria, so probably lots of that. And champagne.

What I’m looking forward to in 2018: I’m hoping to make the big, huge, scary step up to Novice next year. Maybe even in time for my very favorite event, Groton House Farm Horse Trials. If that happens, it will be a dream ~15 years in the making come true!

Favorite horsey moment from 2017: My young horse did his first Beginner Novice and Novice horse trials and he was so. stinking. cute.

Favorite non-horsey moment from 2017: My husband and I got engaged, married and bought a farm. It was a pretty stellar year!

Favorite article I wrote in 2017: Hello, My Name Is Inigo Montoya – I love “The Princess Bride” movie and it cracks me up that this young rider let her dad name her new horse Inigo Montoya.

Stupid thing my horse did in 2017: First or second night at the new barn he got spooked by a nasty thunderstorm and somehow chested open the stall door, breaking the hinges and all, and spent the night pulling blankets off racks and raiding the alfalfa shed.

What I’ll be drinking on NYE: We’ll be hanging out at a local brewery.

What I’ll looking forward to in 2018: I’m looking forward to testing for my “r” Technical Delegate license in August, followed by WEG taking place an hour from my house (and hopefully a medal for the home team!) and my personal goal is to compete in my first long format event in the fall.

Favorite horsey moment from 2017: Jumping around Prelim cross country at the Kentucky Horse Park on my 14-hand pony Princess. The jumps were taller than she was! I came off course like, “Omg, you guys, we basically just did a four-star.” Which is true — mathematically speaking, jumping 3’7″ on her is the equivalent of jumping 4’5″ on a 16-hand horse. I hate math!

Favorite non-horsey moment from 2017: Coming home from the Mongol Derby with all my body parts mostly intact and having a moment of realization that there are things in life more important than horses. Or, at least, AS important as horses.
Favorite article I wrote in 2017: After several years of covering events all over the world, I have come to the conclusion that the most prestigious championship of them all is Jr. Beginner Novice at the AECs. I went into it this year, like, you know who’s getting top AEC billing in 2017 and every year henceforward from now until forever? These Jr. BN kids. They’ve got a smile on their face, ice in their veins, and they’re coming for us all. See “#AEC17 Not-So-Live XC Updates: Jr. Beginner Novice 14 & Under Faceoff Showdown.”
Stupid thing my horse did in 2017: That pony that ran off with all of my stuff, ALL OF IT, on day three of the Mongol Derby, never to be seen again, is on my $h!t list forever. I hope you’re having fun with that iPhone7, little pony!
What I’ll be drinking on NYE: I traditionally make some sort of champagne jello shot. Because I am a college freshman trapped in a 36-year-old body.
What I’m looking forward to in 2018: Serving the great sovereign state of the Eventing Nation to the best of my ability. No sport has more fun. No sport has better people. No sport has a bigger heart. I love you guys! Cheers to 2018.
Go Eventing in 2018.