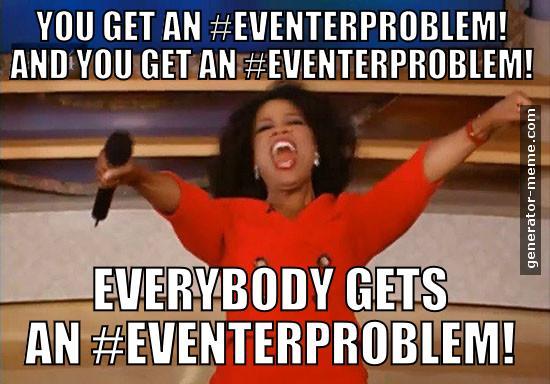 There are natural resources on this earth that are available only in a finite, limited supply — oil, water and coal being a few examples. Other things, well, they just keep coming. Like #EventerProblems.

Here are 30+ more reader-submitted struggles. We’ll kick things off with one from EN’s own Jenni Autry …

Mia eating up xc (before meeting our demise at the water). More importantly, do @joshautry’s videography skills remind anyone else of #blairwitchproject? #eventerproblems #ottb

Dear @riseupcoffee, I need the flat, non-dome shaped lids back in my life. The flys here at #closeupshowstables seem to enjoy your coffee as much as I do and I’m selfish, I don’t want to share! Sincerely, This girl who doesn’t want to share her coffee with the bugs #css #coffeeprobs #flyprobs #eventerproblems #therewasnoemojithatlookedlikeafly #nottryingtosharewithbeeseither A photo posted by @juliajcss on Sep 28, 2015 at 10:01am PDT

✅Things that hurt my broken rib the most: sweeping and sneezing. ✅Things I’m allergic to: dust. #yourewelcome #eventerproblems

Of course, just days before a show, he pulls a shoe. #atleastifoundit #sorryformyfarrier #eventerproblems #lovehimanyway A photo posted by Emma Drane (@southerndelta) on Sep 28, 2015 at 7:52pm PDT

Throwback to that one dressage test at Inavale that was really nice (for us) until we just had to throw in a rear before we went down the centerline to salute. #QueenofCairo #eventerproblems

The insanity that comes over horse show moms before the start of dressage #dunnabeck #eventerproblems #igotthis @mills0898 @shalen_ashton A photo posted by @jennwhitty on Sep 29, 2015 at 5:18am PDT

When you go from work directly to the barn, but your boots are inside. #eventerproblems

My ride for the event this year. Think we would have passed bit check?? #dunnabeck #eventerproblems #lamehorseprobs A photo posted by @jennwhitty on Sep 29, 2015 at 7:42pm PDT

Compete in first horse trial in 3 years on borrowed horse, emerge unscathed. Ride own horse next day, and we both faceplant #eventerproblems

We are incapable of wearing a stable sheet properly and are unashamed. #EventerProblems #sassymare pic.twitter.com/SFhRBDhbtk

Forgot my wallet which means I have no money or ID but no worries, I’m not Jane Doe because I have my Ride Safe bracelet! #eventerproblems — Kelly Parsons (@KellyBear172) September 27, 2015

Not being able to check this account regularly because riding starts at 6am and ends at 8pm on good days #eventerproblems — 3 Day Addict (@EventerProblems) September 27, 2015

Look I may not have done well on that exam but where I’m from low scores win. #Eventerproblems #equestrianproblems

You know you have problems when you genuinely get upset when people walking by don’t pass left shoulder to left shoulder. #eventerproblems

Gets dumped in dressage warm up, gets back on goes straight in the ring and gets a 32! Finished in 2nd but taking home…

From Krista Amos Degitz: “They are replacing some of the railroad ties by my son’s elementary in Harridon, Ohio. All I can think of is that pile could make like 50 cross-country jumps.” 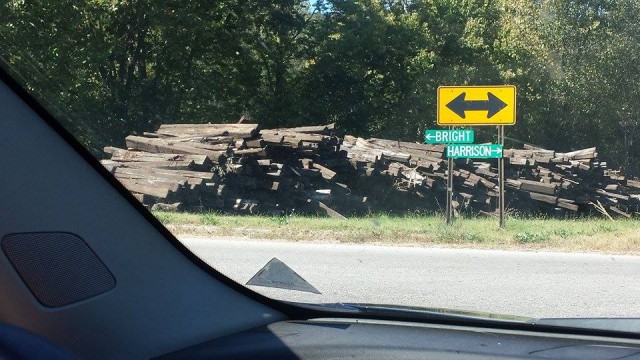