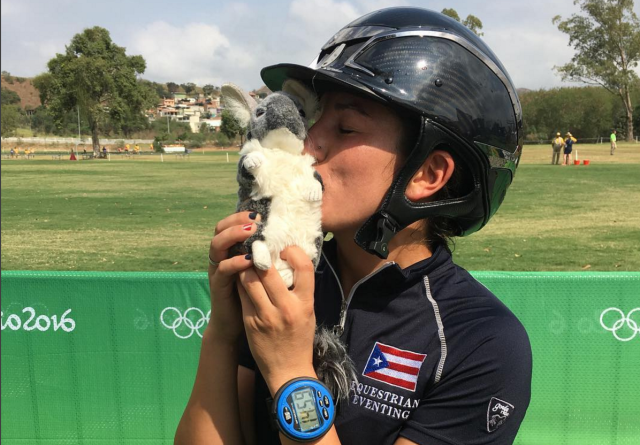 Chinch got a big smooch from Lauren Billys after she completed the cross country course with Castle Larchfield Purdy. Photo by Jenni Autry.

Five days, six medals, 48 stories, hundreds of Tweets, hundreds of thousands of readers, a few site crashes, some laughs, some tears, and one random assault rifle round later, here we are, out the other side of eventing at the 2016 Rio Olympic Games.

If you were to ask me what I have been doing for the past week, I’m not sure I could tell you. It’s kind of a blur. Have I left the house? No. When was the last time I changed out of my pajamas? Questionable. Have I had a shower lately? You don’t want to know. Would I do it all over again? In a heartbeat.

The rest of the stateside EN team, I’m sure, enjoyed a similar sporting staycation — can I just point out that, in addition to our Olympic coverage crew, we had Kate Samuels up covering Millbrook Horse Trials and Lorraine Jackson recapping Gatcombe? As for our Rio correspondent Jenni, the struggle was real down there but she did what she had to do — and knocked her live coverage out of the park, as always.

What a long, strange, amazing trip it has been. Thanks for joining us on the journey, Eventing Nation.