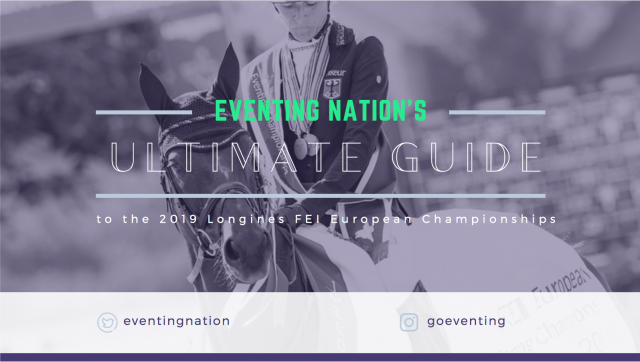 Welcome to the 2019 Longines FEI European Championships. The summer season has been building up to this point and now, with the competition waiting in the wings, it’s time to get serious. We present: the ultimate guide to the week ahead.

Consider this your Euros bible – keep it bookmarked for the easiest access to all the essential information you need, including schedules, live-streams, up-to-the-minute scoring, and, of course, every last bit of coverage EN puts out. We’ll be adding each new article as it goes live – simply scroll to the bottom to find the latest additions. We’ve also got the brilliant EquiRatings Prediction Centre, which will show you each combinations chances of a top placing – and it’ll keep updating throughout the event. You can find it at the bottom of the page.

Ready? Let’s do this thing.

THE COMPETITION: The Longines FEI European Championships will run at the CCI4*-L (formerly known as CCI3*) level. Teams will be made up of four horses and riders with a drop score, although in some cases – Finland, Poland, and Spain, we’re looking at you – nations will field three-person teams, which means that all scores will count. The dressage test will be FEI 2015 4* B.

WHAT’S AT STAKE: Most importantly? Two team qualifications for next year’s Tokyo Olympics. They’ll be awarded to the two highest-placed unqualified teams at the conclusion of the competition – and with Austria, Belgium, Finland, Italy, the Netherlands, Spain, Switzerland, and Sweden all still looking for their golden ticket, the pressure will be on. Great Britain will be hoping to retain their title, though host nation Germany certainly won’t make it easy for them – with reigning individual European Champions Ingrid Klimke and SAP Hale Bob OLD at the helm, everyone will have to bring their A-game. For Ingrid’s part, she’ll be aiming to hold onto her crown – and cash in another €17,500 cheque for taking individual gold.

THE TEAMS: Seventeen nations will be battling it out for gold and glory, with thirteen fielding full teams. The Czech Republic, Denmark, Hungary, and Norway will only send individuals. Each nation was allocated six slots – four for team riders, and two for individuals – but Germany, as host nation, has been allowed double the number. They’ll bring forward eight individuals on top of their team of four. In total, we’re looking at 76 definite entries.

THE OFFICIALS: There’s a truly top-notch cast of ground jury members on duty at Luhmühlen. Germany’s Martin Plewa will serve as president of the ground jury, while Denmark’s Anne-Mette Binder and Australia’s Peter Shaw will work alongside him. The FEI Technical Delegate for the week is the Netherlands’ Gert Naber. The cross-country course will be designed by Mike Etherington-Smith, who is enjoying his third year at Luhmühlen, and warned us earlier this summer that he hasn’t played all his trumps with the course yet. On Sunday, Luhmühlen’s famously up-to-height showjumping course will be designed by Marco Behrens, who takes the reins from Martin Otto, Luhmühlen’s regular course designer.

[Times are listed in local time, which is Central European Summer Time – simply subtract an hour if you’re following along from Great Britain, or subtract six hours to get Eastern Daylight Time.]

HOW TO FOLLOW: No matter where in the world you are, you’ll never be starved for content from this Championship, which promises to be enormously well-attended by Europe’s equestrian media heavyweights. Make sure you download Luhmühlen’s handy app, which offers you an easy way to keep track of times and scores, and check out our comprehensive guide to live-streaming. While you’re at it, here are the Instagram accounts and hashtags you’ll want to follow to see the competition from all angles…

Accounts: Luhmühlen, CrossCountry App, Horse&Hound, German Eventing International, FEI Eventing, Equestrian Team GBR, and Horse&Country TV. Don’t forget to follow EN, too – we’ll be bringing you all the insanity in the middle you could possibly need! (And if you’d like to see the real behind-the-scenes life of an EN journo on tour, you certainly can. #shamelessplug) Want to know the juiciest stats throughout the competition? Make sure you follow EquiRatings.

The 2019 European Championships: Your Guide to Form, Function (and Fun Facts)

Euro-Madness: How to Watch the European Eventing Championships, Worldwide

At a Glance: The Horses of the European Championships

At a Glance: The Riders of the European Championships

All Pass in Rather Jolly First Horse Inspection

Medals on Their Minds: Chef d’Equipes Weigh in on European Championship Team Selection

Magic Mike Risks it All

The Fast and the Furious: The European Championships Track, Broken Down

A Golden Girl, A Chipmunk, and the Red Queen Walk into a Bar